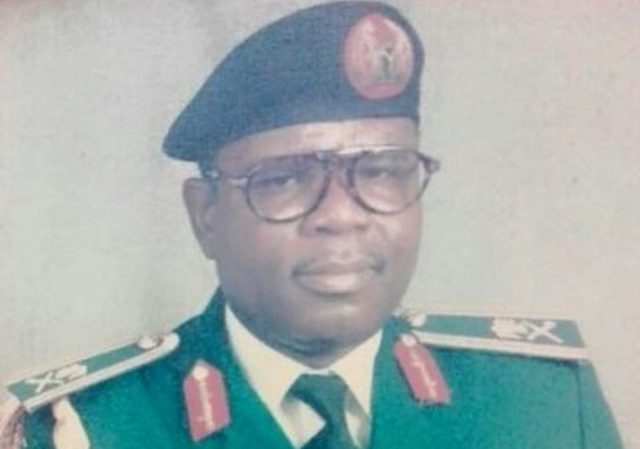 Of all the people arrested and found guilty of General OladipoDiya (N/671) coup plot in December 1997 under late General Sanni Abacha, only three have not been given Presidential pardon. They are Major General Adeniyi Tajudeen Olanrewaju (rtd.) (N/817), Colonel Edwin Jando(N/3400) and late Colonel O.O. Akinyode(N/5852) .

If granted the pardon will close the final chapter of the twenty year old saga and speed up the needed reconciliation.

On March 4 1999, in an extra ordinary gazette Number 33 of government Number 78, the then Head of State, General AbdusalamiAlhajiAbubakar, GCFR, granted the following, grant of clemency.

Omitted on the list of those pardoned were General Olanrewaju,Col. Jando and Late Col. Akinyode.

In addition, he was the Chairman of States Asset Sharing Committee and also Chairman on the Review Committee of the report on Nigerian National Petroleum Corporation

I was with him at his Ikoyi’s residence last week during which he explained to me the difference between pardon and clemency. “There were two sets of amnesty granted, one amnesty is”pardon” while the other is “clemency” and yet both were allegedly committed under the same set of circumstances. This clearly runs against the then governments’ so called policy of national reconciliation”.

General Olanrewaju explained that only President Buhari has the power to grant him Presidential pardon.

He declared “Throughout the trial, there were no charges relating to illegal acquisition to warrant any forfeiture of “ill-gotten wealth”. Throughout the period of the court arraignment, there was no trial within trial that could warrant any accused person to defend him or herself against corruption or misuse of government funds. Any forfeiture without a fair hearing or trial under a properly constituted legal body is ill motivated, illegal and therefore totally void of”.

“The coup trial, like that of 1995 was conceived in bad faith and executed with malice. The principles of fair hearing, fundamental human rights and choice of legal representatives were not given pride of place and respect. It was a secret trial with serious breaches of fundamental rights of the accused persons”.

“I have served my country to the best of my ability and with all that I have got. I am lucky to have given an opportunity to serve. The pardon which I am seeking will let me get over the nightmare. I will also enable me to be paid my entitlements for all the years I have served in the Nigerian Army”.

General Olanrewaju said his regret was not telling General Sanni Abacha about the coup plot and that till today he believed that it was a set up. “I have forgiven those involved including those who betrayed me. I don’t carry any hatred in my heart”.

In conclusion, he said it is important to state that the events that led to these circumstances are unfortunate and deeply regretted. There is this adage that talks about human error and forgiveness which states “to err is human and to forgive is divine”.

Why I Rejected A Rolls Royce Birthday Car Gift