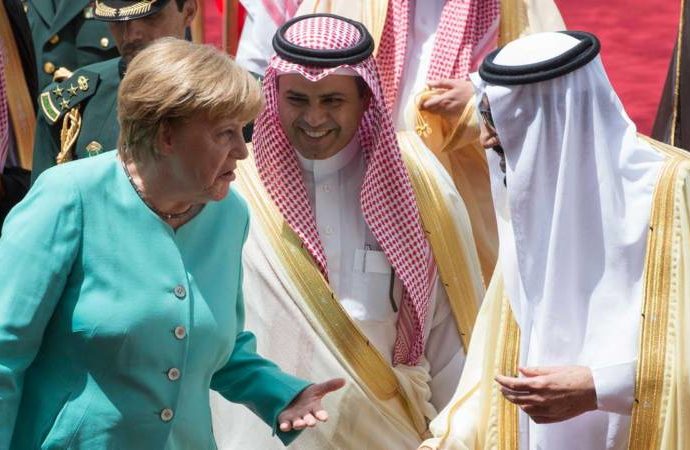 German Chancellor Angela Merkel met Saudi King Salman on Sunday, state media said, as she began a visit focused on bilateral relations and preparations for the next G20 meeting.

King Salman received Merkel in his palace in the western city of Jeddah, SPA state news agency said, adding that the two presided over a signing ceremony for several cooperation agreements.

Merkel was expected to discuss with the Saudis the agenda for the G20 meeting in July, including the Paris climate accord and G20 decisions on energy, according to a German official.

“There will be for sure a discussion over how Germany could support Saudi efforts to diversify its economy and reduce its dependency on fossil energy,” the official said ahead of the visit.

“Economic relations are solid but not shining. The volume of commercial exchange stood at eight billion euros ($8.72 billion) in 2016. German investments in Saudi were around 1.2 billion euros ($1.3 billion),” the official said.

The world’s largest oil exporter has embarked on an ambitious plan to diversify its oil-dependent economy after a sharp drop in crude prices hit revenues.

Merkel is also expected to urge Saudi Arabia and its fellow Sunni-ruled Gulf monarchies to reduce tension with their Shiite-dominated neighbour Iran, the official added.

Merkel travels on Monday to the United Arab Emirates, where German investments stand at around 2.4 billion euros ($2.6 billion), the German official said.

German chancellor in Saudi for G20, cooperation talks was last modified: April 30th, 2017 by Arinze Ago