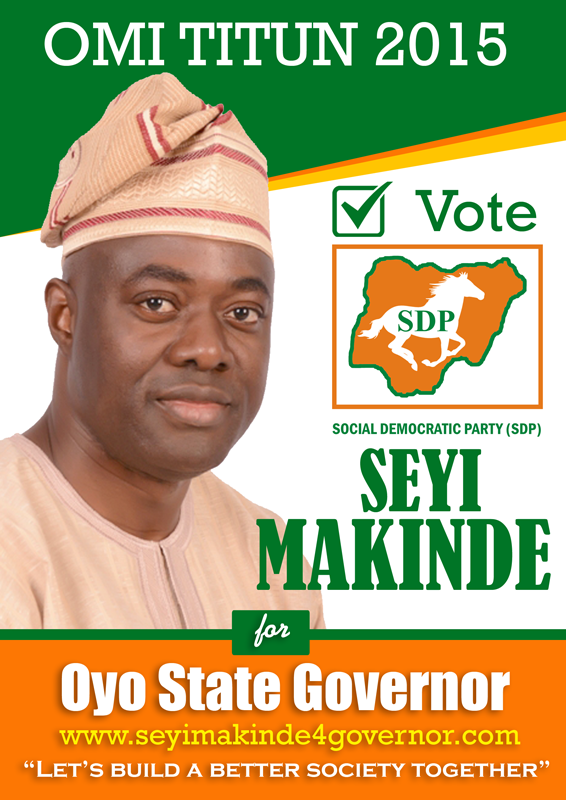 The recently agreed upon unity among the rank and file within Oyo PDP to wrestle power from the ruling party (APC) come 2019 may soon be threatened if issues at hand are not well managed. This is due to the many interests coming from the party’s formed coalition.

Recall that Senator Ladoja and Seyi Makinde joined PDP shortly after Ahmed Makarfi and other leaders of the party visited them and other political bigwigs in the state. And the believe is that if Ladoja with his very strong team in Accord and Makinde’s SDP could come together to join forces with PDP then the 2019 guber election in Oyo State is as good as a won race for the party.

But already, there are many aspirants jostling for the party’s guber ticket and this we reliably gathered has been a major challenge, as most of the aspirants are duly qualified and also with high stake too. Out of all these aspirants however, 3 are very prominent and they are Engr. Seyi Makinde, the Social Democratic Party (SDP) guber candidate in the last election; Senator Femi Lanlehin, who defected to Accord while serving as Senator under APC in 2014 and Senator Ayoade Adeseun.

Let’s briefly tell you about the 3 aspirants: Seyi Makinde, born 25 December 1967, is the Group Managing Director of Makon Group Limited. He is a businessman, politician and philanthropist from Ibadan, Oyo State. A refined Engineer and a subject matter expert on fluid and Gas Metering. He is the Group Managing Director of Makon Group Limited, an indigenous Oil and Gas companies in Nigeria. He established his first oil and gas private business called Makon Engineering and Technical Services, (METS) at the age of 29 in the year 1997, after earning years of work experience with international Oil & Gas companies. Makinde, after losing his bid to secure PDP governorship ticket in 2014, defeated and contested the guber race under Social Democratic Party (SDP).

While Senator Solagbade Olufemi Akinola Lanlehin, born 8 July 1953, is an Ibadan born politician and prominent Barrister at Law, who was elected Senator for Oyo South in the 9 April 2011 National elections, running on the All Progressives Congress (APC) platform. He studied law at the University of Nigeria for his Bachelor of Law and later attended Nigerian Law School in Lagos. He was called to the Nigerian Bar in July 1977. And Senator Ayoade Adeseun on his own is an astute businessman/politician. Ayo Adeseun was born on 1 January 1953. He obtained a Diploma in Town Planning from Ibadan Polytechnic, Ibadan, Oyo State, and was an Assistant Town Planning Officer with Urban Development Consultants in Ibadan, Oyo State from 1976 to 1977.

He later moved to California, United States and worked as an Associate Planner, Southern California Association of Governments, Los Angeles from March 1980-November 1982, and then as a Budget/Administrative Analyst with the same organization from November 1982 to April 1987. In 1986 he won a B.A in Political Science/Public Administration from California State University, Pomona, California, U.S.. He then held a series of administrative positions associated with logistics at Santa Monica College (1987–1989), California State University (1989–1992) and Saddleback College (April 1992 – September 1994). Returning to Nigeria in 1994, Adeseun became a Principal Partner and Chief Executive Officer of Facilities and Environmental Management Associates, in Ibadan from 1994 to 1996.

Though there is this unconfirmed story that there is an agreement between Ladoja and Makinde to work together and ensure victory for the PDP. That Ladoja is willing to support Makinde’s aspiration to clinch the PDP ticket, while the former governor is expected to nominate one of his loyalists as Makinde’s running mate. But Ladoja on the contrary as leader of the coalition, we gathered, is seriously rooting for Senator Femi Lanlehin while many believe Seyi Makinde should emerge as the party’s candidate.

We also gathered that as some people are for Femi Lanlehin and Seyi Makinde, some founding members of the party are working for the emergence of Senator Ayoade Adeseun, who represented Oyo Central between May 2011-June 2015.

Meanwhile, even amidst of all these internal issues rocking the party, prominent stakeholders in PDP have vowed to sustain the existing unity within the party, to prepare for the battle ahead.

In fact, Seyi Makinde in one of his recently granted interviews was quoted to have said that even if he loses the primaries, he is not going to leave PDP.

“If I don’t get the governorship ticket of the PDP for 2019 election, I will remain in the party. Put it down in your record. The suffering of the people of the state is far beyond me as a person..

“We have failed as individuals and now we are together in the interest of the suffering people of the state. Oyo State people don’t deserve what they are getting at the moment from the current government and we must make a sacrifice to ensure we change their story in 2019.

“I don’t nurse any fears about crisis erupting in PDP over the choice of guber candidate. I am saying this with all sense of responsibility and commitment. Now, we have realised that we have failed the people and this has been the major driver for all of us coming together at this point.

But can all these interests and demands of many party followers, in seeing that their prepared candidate emerge in the primaries, be met? Can the party in the state really shine at the 2019 elections. Who are those who will be in control of affairs of the party in the party, as general congress hold. All these and many more are questions begging for anwers.