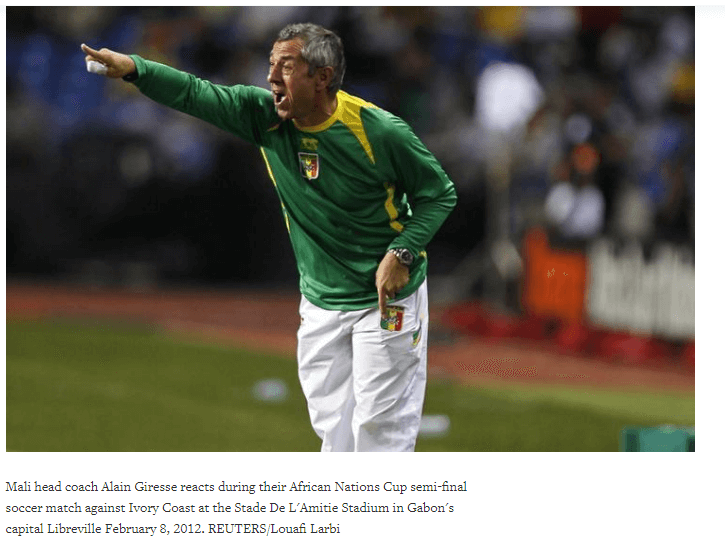 French tactician, Alain Giresse has resigned as coach of Mali on Thursday after the country’s heavy defeat in World Cup qualification last week effectively left them out of contention for a place at next year’s finals in Russia.

Mali were whitewashed 6-0 in Morocco last Friday and hostile Mali supporters voiced their displeasure with Giresse as the team drew 0-0 at home to the same opposition on Tuesday. That kept Mali bottom of Group C on only two points, five behind leaders Ivory Coast with two games to play.

You may also like: “HE WILL BE BACK VERY QUICKLY TO HIS BEST” – ARSENE WENGER ON ALEXIS SANCHEZ

“He is not in the right frame of mind to continue, plus there are concerns for his security,” said Mali Football Federation president Boubacar Baba Diarra.

The federation will hold a meeting on Thursday to discuss who will take charge of the team ahead of their next qualifier against the Ivory Coast in Bamako on Oct. 6.

It was 64-year-old Giresse’s second spell as coach of Mali, having taken the country to third place in the 2012 African Nations Cup.

Giresse Resigns As Mali Coach After Failing To Qualify For Russia 2018 was last modified: September 7th, 2017 by Damilare Salami