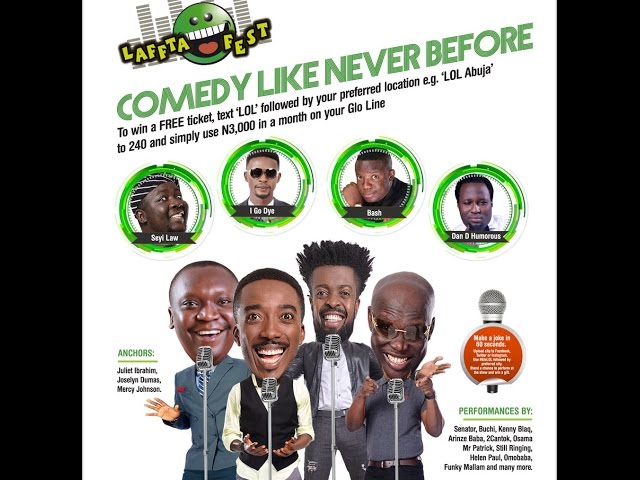 The event which held at the Old Parade Ground in Garki, was witnessed by a capacity crowd which came from all the nooks and crannies of the FCT and as far as neighbouring Nasarawa State.

Excited residents attested to the fact that in the more than three decades’ existence of the Abuja landmark, only very few corporate organisations had achieved the feat that Globacom recorded with the iconic show.

Jos-based comedian, Osama, opened the show with rib-cracking jokes and anecdotes about life in the pseudo-militarised city of Jos. MC Tagwaye, who is noted for perfectly mimicking President Mohammadu Buhari, raised the bar as he reeled out jokes bordering on the socio-political circumstances around the country.

His performance reached a crescendo when he gave some members of the audience opportunity to ask questions about his achievements as  ‘His Excellency’. The spontaneity and quick wit got him a loud ovation as the crowd tagged along with him. They equally sought his views on how “his administration” would iron out   issues of witches and wizards flying at night.  He hilariously responded that the matter would be addressed by his Minister of Aviation. Dan the Humorous whose jokes bear largely Port Harcourt-oriented plots  picked the baton and served the crowd jokes on health and care-giving institutions, especially teaching hospitals.

Ugandan comedian, Salvador serenaded the audience with his own style of jokes. His jocular comparison of reactions of the authorities to suicidal people in the advanced countries and in his home country, Uganda drew wild laughter.

Other comedians who thrilled the audience to no end include I Go Dye, Gordons, Bovi and Basketmouth. Globacom’s National Sales Coordinator, Mr. Kazeem Kaka, described the show as reward for  Globacom subscribers for their loyalty to the brand. The show, according to him, would be taken to 25 more cities over the next six months. The cities include Awka, Ikeja, Ikorodu, FESTAC , Ajah, Owerri; Asaba; Calabar; Enugu; Aba; Suleja, Kubwa, FCT, Ibadan; Ijebu Ode; Abeokuta; Ekpoma; Kaduna; Akure; Lokoja; and Anyigba.

A dance competition  was also staged to add colour to the performances. Three winners, professional dancers Eunice Nkwocha and Ijeh Joy and Favour Solomon, a student emerged as people’s favourites and went home with mouth-watering gifts. Nollywood legends, Richard Mofe-Damijo, Kanayo O. Kanayo and Patience Ozokwor popularly known as Mama G were celebrity guests at the show. The next edition holds in the Coal City, Enugu. To attend the show, current and prospective subscribers are enjoined to recharge and  use up to N2,000 credit within one month and text LOL and preferred location to short code 240; for example, “LOL Enugu to 240”.