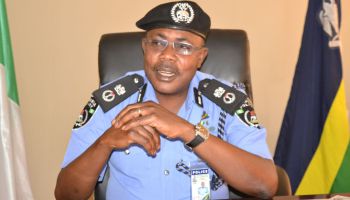 Since Mr. Agyole Abeh resumed as Commissioner of Police, Kaduna State last year November, he came ready to ensure that the state is crime free and habitable to all having served and held different posts in other commands, and won an award for being the Best Police Operations Officer in Nigeria. In this interview with City People’s Asabe Ndoma, this well-bred police officer who has ensured that the crime rate in the state is reduced to a minimum level said “when I came I knew exactly the threat level on ground and I set my motions in place to control criminality in the state “That means a lot of sacrifices” he said.

Agyole Abeh who enlisted into the service in 1984 as pioneer cadet inspector, and trained at the Police College Kaduna said he is lucky to have officers who are determined to work hard, and their welfare is my priority”. The CP who hold’s a degree from the University of Lagos (Philosophy) also tell us efforts made by the command in tackling kidnapping and Farmers/herdsmen crisis in Southern Kaduna.

Could you please give a brief about yourself?

What are some of the challenges faced since you became the CP?

As a matter of fact when I took over in November last year, we had a lot of security challenges within the city centre. We have incidences of kidnapping and banditry and robbery incidentally that was the period of the crisis in Southern Kaduna, that is the conflict between herdsmen and farmers. There was a lot of work to do.

What’s your take on kidnapping along Kaduna – Abuja Road and the state in general?

Yes, there are issues of kidnapping along Kaduna – Abuja Road. In particular we took adequate measures and the Inspector General of Police, in his usual ways deployed about 600 mopol and close to 90 vehicles just to man this road. The incident was checked.

This is politicking time, there is the APC main faction. There is the Akida Faction, PDP is also on ground, how have you been able to see that there is peace among these parties and different factions?

You know we have constitutional responsibility, that of maintenance law and order, we try not to get entangled in political crises. Certainly in politics there must be issues, what we do as police officers, we keep the tap to make sure that there activities does not result in breakdown of law and order like the one you mentioned. We are on ground to prevent degeneration of crises.

What is the commands relationship with Kaduna State Government?

I have come to serve the people of Kaduna State. The responsibility of governance is in the hands of government of Kaduna State. I know we have come to serve them I can say without contradiction that Governor Nasir El-Rufai those not just appreciate the services of the police, he has visited this headquarters to practically show his appreciation in what we are doing.

What is your most challenging moment in the state?

When I came in the issue of crisis in Southern Kaduna was on. The Inspector General of Police directed that I relocate to Kafanchan at the peak of the crisis which I did. We were there alongside the Garrison Commander. We remained there until we saw that the threat level was brought to an acceptable standard.

What is the level of crime prevention under your leadership in the state?

We have in place proactive measures especially in the city centres, Kaduna metro in particular. Honestly, I think the police have done wonderfully well in terms of curbing criminalities in the city centre. We have a near zero case of kidnapping and robbery now. Miscreants, your boys who indulge in drug addiction. They call themselves, sara saka boys. In the last two months, we have taken close to a 100 to court.

What is the package you have in place for enhancing the welfare of your officers and men?

Yes that responsibility also lies in the hands of the police. I think most of the men on special duties who have come to assist us in this command are put on allowances which has been paid to them. At our own level we try to come to their aid regarding their welfare. So we are doing well in this command.

What gives you an edge over other commands? What have you put in place to make Kaduna a role model?

Well! I came here with a mission. This is not my first state I was here as commander in-charge of Police mobile force then as a junior officer, so I have a little idea and topography of the place I am going to command. When I came in I knew exactly what threat level was on ground so I set my motions into process to control criminality in the state. That means a lot of sacrifices. I was lucky too, I met category of officers who were determined to work with me. We came up with a common plan. We strategized out plans on how to police Kaduna, especially the city centre because if activities being grounded in the capital, it does not speak well for the state.  We have to draw a crime map of the state and Kaduna in particular and sectorized them. Officers were put on their toes. Honestly we worked day and night. I personally worked day and night and at the end we saw result.

So you are happy for the successes recorded so far?

Very, very because honestly unless you do not have conscience as a police officer and you are saddled with responsibility and each time there are incidents in the town honestly you should not be comfortable. So I was happy when I felt that there was a down trend in the crime rate. So I said that means it is yielding results.

Why did you decide to join the police force?

Honestly it is something that grew out of childhood. Honestly since my childhood I like being in charge…..laughs! One incident led to the other, that actually gingered my desire. Am happy I took that decision.

Did you rise through the ranks?

I came as a cadet as a cadet inspector. I got my promotions through hard work.

What advice would give for those who want to join the police?

You are very busy commissioner, what time do you have for family, meet friends, unwind?

Honestly we do not work like the clock, there are times for business, you can’t think of socializing but when there is a little gap, I certainly go to the stadium every morning apart from Saturday and Sunday. I leave my house by 5:30am to the stadium, I train along with a lot of people, quarter to seven, I am done. I think that some form of socializing too.

Justice. Honestly speaking it is a principle I do not intend to dis-continue until I leave the service. I am happy when I see justice is done to those who deserve it, not minding what the other person thinks.

Sir, what would you use your last money to buy?

Can money buy anything? I say money can buy nothing. I wish it could buy happiness I could have done so, but honestly, I don’t think money is capable of buying anything.

What is your advice to the citizens of the state?

My advice to the citizens of this state is that we should be law abiding. Try to control our words. The level with which these young  children too, are going into crime as a result of drug addiction is worrisome, parents must watch their children and try to guide them because they need us at this material time. They are easily influenced by childhood syndrome. The police will do everything possible to ensure that the state is free of crime.

I Am Going To Reduce Crime Rate To Near Zero In KADUNA was last modified: August 14th, 2017 by Reporter