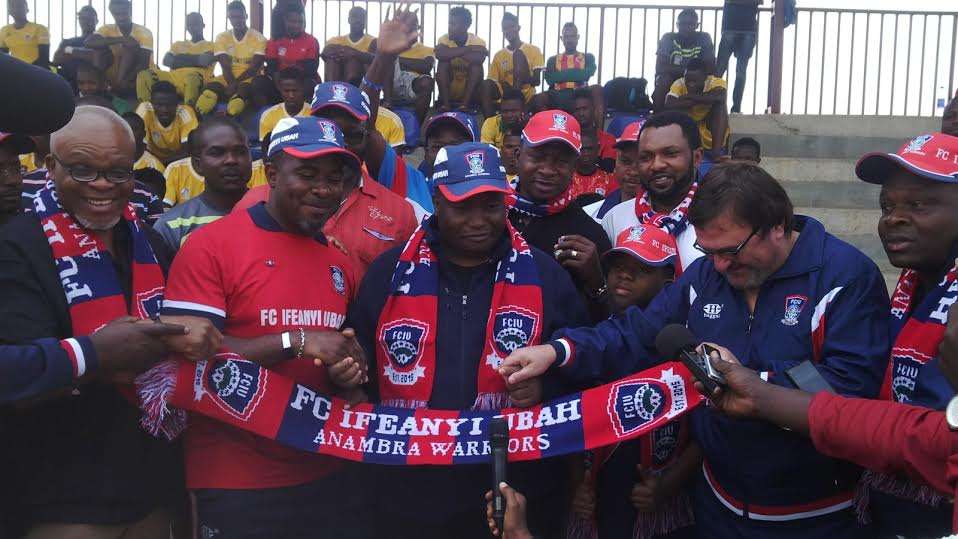 Ghanaian born Yaw Preko is one the finest coaches on the African continent. His rich curriculum vitae speaks volume for him, he has won many league titles for clubsides in Ghana before being beckoned upon by the management and scout of Ifeanyi Ubah FC.
Yaw Preko had indeed brought his vast knowledge of coaching experience to bear as he has been able to steady the ship at Ifeanyi Ubah Football Club.
City People’s reporter, FEMI FABUNMI, brings you Yaw Preko’s interview where he spoke about his stay in Nigeria and what he has been doing to make Ifeanyi Ubah very thick. Excerpts.
You have started the second half of the season on a bright note, winning the first two games of the season, what is the secret?
Well, our quest to grab a continental ticket has been a big push for us. Ifeanyi Ubah Football Club has a philosphy. It is to always get at least a point in our away games, that has been helping us.
Your club has remained unbeaten in eight games, how long do you intend to remain unbeaten?
Yes we were unbeaten in 8 games, but it is quite unfortunate that we lost an away game to MFM FC in Lagos. But I can assure you that we will bounce back.

Your tutored your boys to a 3-0 emphatic win in an unfamiliar ground at Ibadan, what did you do to win so convincingly?
Before the match, we knew Ibadan is a diffucult ground, we knew getting a point from Ibadan would be a difficult nut to crack. What we did was to throw everything at the match, we engaged in a very rigorous training exercise prior to the game. The boys were well motivated and pysche-up this and many more gingered and compelled my boys to victory in Ibadan. Ifeanyi Ubah Football Club will try to win more games so as to finish well this season.
Does finishing well mean grabing a continental ticket?
It can mean a lot of things, but one thing is certain you must finish in top 3 to get an automatic slot on the continental championship, no club will be satisfied with just a continental slot. Ifeanyi Ubah Football Club has the potential to win the league, so who says we can’t strive to win the NPFL.
Can we link the club’s early ouster from the Confederation Cup to inexperience?
Well, it was their first time on the continent so one cannot rule out experience.
However, I wouldn’t want to base it on experience alone, I think we were just unlucky too.
Considering the fact that you are 5 points adrift of league leaders Plateau United, do you think you can catch up?
Why not, this is football and they always say in football anything can happen. Five points is not too big to be caught up with. All we need do is ensure that we are very focused and dedicated. We will try to avoid unnecessary defeats. Once this is achieved Ifeanyi Ubah Football Club will just be coasting home to victory.
What is the relationship like between the Club’s Chairman and the players and mangement?
The relationship is highly cordial, the Club’s Chairman has been very supportive, the man is troubled and we need to win for him.
Your country Ghana has recently appointed an indigenous coach. What is your take on this?
It is a good thing that Ghana FA has done. I recall that Nigeria once did it when they hired late Stephen Keshi and he won the Nations Cup for the country. I believe Kwesi Appiah knows the job and he will surely deliver.
How would you cope with the absence of your No 1 goalie, Ikechukwu Ezenwa?
Ikechukwu is with the rest of Super Eagles in camp, he is a very good Goalkeeper but I can tell you his absence will not affect us. We have other fantastic keepers that can fill his void. We will surely miss him, but his abscence will not affect the team in any way.
Many people have questioned Ifeanyi Ubah plenty penalties this season, they said some of the penalties awarded to the side is underserved?
Our penalties are very legitimate, and well deserved. You can take a look at them, then you would know.
How have you managed to secure away points this season?
We take both home and away games seriously, we approach our games with a lot of confidence many teams don’t play away games with confidence, simply because they feel that it is difficult to win away from home, so they try to sit back and this don’t always help.
What we do is try to frustrate our opponent and sometimes they commit foul in the box 18, this is exactly how we gain penalties both on home ground and away.
Tell us how you get the Ifeanyi Ubah coaching job, considering the fact that you are a Ghanaian?
I had tutoured many great Ghanaian club sides including the great Heart Of Oaks, truth is there was vacancy at Ifeanyi Ubah and I was contacted to come take up he job.
You have last season highest goal scorer in your team, but Godwin Obaje hasn’t replicated last season form at Ifeanyi Ubah.

What could possibly be the reason for this?
He just joined the club this season, he could be that he is still trying to adjust to the pattern of the club. One thing I don’t do is mount pressure on him. With time, he will adjust and the goal will start pouring in.
Now that the second stanza has begun, how would you fortify your team?
The team has been fortified with two defenders, we will try to tighten our defense so as to concede less goals.
What will be your approach to your opponent?
It will be that we will not underate any of our opponents. We will approach every game like a cup final. Our target is winning theleague and grabing a ticket for continental games, to achieve this no team must be underated.
Tell us what you feel about Nigeria?
Seriously speaking I have enjoyed every of my stay in the country. The atmosphere, people and food are wonderful. I am enjoying and savouring every second of my stay in Nigeria. Good people, good nation.