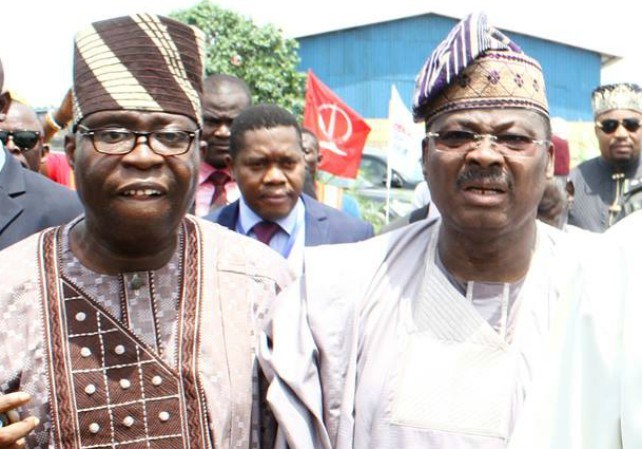 There are strong indications that the Governor of Oyo State, Senator Isiaq Abiola Ajimobi, is set to battle the incumbent APC Senator, representing Oyo South senatorial district in the country’s Upper Chamber, Senator Soji Akanbi, for the seat.

Though, the Governor has not made any official statement concerning this development, but the body language within his camp suggested so; his sponsored campaign materials and billboards are all over Ibadan. Not only that, some close allies of the governor have been telling whoever cares to listen that Ajimobi may run for the senatorial seat owing to the incessant pressure putting on him by people of the zone. A move, which, of course, will set the two brothers: Soji Akanbi and Ajimobi on a collision course politically, as the former is interested in running for a second term.

Even though both of them are not related by blood but they have been relating with each other as brothers for many years now. They are both Ibadan indigene and Ibadan people are one big family; all indigenes of the city regard themselves as brothers and sisters.

Aside that,  Akanbi and Ajimobi have many things in common. They both belong to the progressives family right from the AD days. They are alumni of Lagelu Grammar School, Ibadan and they have both served as federal law makers before. While Soji Akanbi was a member House of Representatives from 1992 to 1993 under the auspices of  AD, Ajimobi has served as a Senator representing Oyo South between 2003-2007 also  on the platform of AD. Their closeness is also born out of the fact that Soji Akanbi has always been loyal, as a progressive. He is one of the few persons who could look the governor in the eyes and tell him the truth. He has never denied being  Ajimobi’s younger brother and winning the senate ticket to contest the 2015 election was not without Ajimobi’s influence.

Now, many are wondering about what becomes of their relationship, at the end of the day, if Ajimobi decided to contest Oyo South senatorial ticket with Akanbi? Some aides of the Governor, however, have said it was a done deal for Ajimobi to run.

But what could have prompted this idea of Ajimobi wanting to run, knowing fully well that his brother will likely be going for a second term?

While political relevance and many other things have been cited as the major reasons for Ajimobi’s decision, some observers want to believe that there has been a crack in their relationship long before now. They cited the recent events, especially the rumour making the round that  Akanbi may dump APC and how his name was mentioned by President of the Senate Dr. Bukola Saraki as one of the senators from Oyo State who were defecting from the ruling party.

But  Akanbi  later addressed  a Press conference and denied the  claim. Thus excluding himself from such a move

Also confirming the fact that all is not well between Ajimobi and Akanbi was a statement credited to one of the governor’s aides, Morounkola Thomas, at an event tagged “The Clarion Call of Mission of His Excellency”, held at state party Secretariat, Oke-Ado, where some party members said they were compelled to ask Ajimobi to run for Senate in 2019 because the APC did not want Ajimobi to become mere figurehead in the party after leaving office as governor.

In the said statement when he was talking about the fate of the incumbent senator representing the district, Akanbi,  Thomas was quoted saying: “There is no compensation in politics. You struggle for power. If the constituents believe that he (Akanbi) has served them well, they would give him the ticket. Those of us here talking believe that Ajimobi is the man to go to represent this Senatorial district. Power is not dashed ala carte). The incumbent has to struggle for his political survival. He is my friend and I wish him well.”

A fresh twist was, however, introduced to the whole scenario last week when a letter purportedly written to Gov. Ajimobi by  Akanbi surfaced online. In the said letter,  Akanbi wrote extensively on why he wants re-election to  the Senate and how it becomes imperative for him to seek directive from Gov. Ajimobi. “My decision to seek re-election to represent  Oyo South Senatorial district is based on yawnings  of the people of the district.

Their plea is hinged on two factors. First is consolidation of our shared values of democratic ideas and second, continuity of the welfarist programmes that are targeted at the people, which the members of the constituency are currently enjoying. Sir, they are being very supportive and understanding for a renewal of the hope of better service, in the light of the social contract we both dispose to. Your Excellency, since there is no absolute rights,and given the fact that you offer the political compass that directs my sail, both as an uncle whom I hold in a very high esteem and as a supportive leader, who is interested in my progress.

That would be quite unbecoming and as empty as a thought without content. My loyalty to you sir, I pledge   once again, is total. While awaiting Your Excellency’s speedy response and further directive, please accept my sincere best wishes with utmost regards,”the letter reads.

But surprisingly last week, and while it has not been confirmed whether Gov. Ajimobi replied  Akanbi’s letter or not, it was reported in some online media  that Ajimobi has secretly picked expression of interest and nomination forms for Senate. A move, which was said to have been taken by the Local Government Chairmen in the state.

Meanwhile, those who know  Akanbi and Gov.  Ajimobi very well are of the opinion that, which ever way it goes, both men always know how to resolve their differences  as brothers, as they have always been doing in the past. That they know how to agree with themselves  without involving any third party.