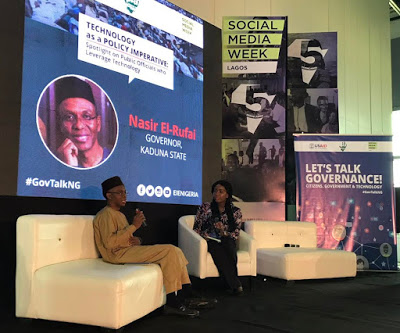 Kaduna state governor, Nasir El Rufai, during the onging Social Media Week was referred to a post he made in 2012 on twitter in which he said that any person, soldier or not, that kills a Fulani person, takes a debt that is repayable in 100 years. Many found his tweet inciting and called him out for it.
Speaking yesterday at the Social Media Week, he stated that his tweet was never a threat but rather a call that helped avert a major crisis. 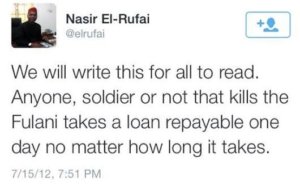 “People are making reference to what I tweeted in 2012. What did I tweet? I tweeted that any person, soldier or not, that kills a Fulani, takes a debt that will be repayable in 100 years. It is a statement of fact.

It is not a threat. It is not an incitement to violence and there is a context to it. In 2012, the General Officer commanding of 5 divison of the Nigerian Army in Jos, gave an instruction that it behooves on the governor of Plateau state to wipe out two Fulani settlements just outside Jos on the suspicion that they have weapons. This was reported by the governor of Plateau state and the commander gave the order and I heard about it. I called and said please don’t do that. Go and surround the place and search for weapons. But that was not the objective.

The Objective was to remove them from the settlement because they are settlers and people that think that that land is their ancestral land, want to take the land. It is not because they had weapons. Now I know the nature of the normadic Fulanis. My great great grand parents used to be such people. If you kill any of them unlawfully, they organise to take revenge no matter how long it takes.

He did not listen and that is why I put it on the record so that when it starts happening, nobody would say he was not warned. Ultimately because of that tweet, the commander retracted his plan and they went and surrounded the settlement and searched for weapons and found none.

To me, what I did averted a potential disaster but that is being put as if I tweeted something inciting anyone. If you don’t believe what I tweeted, go and do what the army wanted to do and see the consequences”he said.

Gov El Rufai speaks on the controversial tweet he made in support of Fulani tribe in 2012 was last modified: March 3rd, 2017 by Reporter

Happy birthday to my brother and friend, K1 De Ultimate

Why I Am Running For EKITI Governorship...