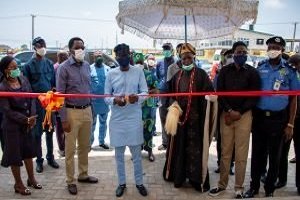 Speaking during the inauguration, Sanwo-Olu said that government would continue to beef up the security apparatus in the state by providing the required support to the police for effective discharge of their duties.

He said that the building, which had several offices, would serve as a functional holding bay for the police as they carry out their duties even during this lockdown.

The governor urged Lagosians to remain law abiding and follow government directives during the COVID-19 pandemic period so as to assist the security operatives in maintaining peace.

”Our security operatives are doing their job, they are doing a good job and crimes have come down because they have come out.

“We, as a government, need to encourage them, we need to give them all of the things they need to function effectively.

”We know there are people who will always want to foment trouble, people with ulterior motives are everywhere but the police are also there to protect lives and property.

”As the governor, I am supposed to give them the support they require to make sure they do their job without fear or favour,” he said.

Sanwo-Olu said the new facility would further boost the morale of the men of the police force.

He said that other complementary facilities like the conference centre, blocks of residence for the Area Commander, officers’ apartments and equipment were still under construction.

According to him, when completed, Area ‘J’ Police Command will have the full complements of operational base for the efficient policing of the axis.

”It is a befitting Area Command Headquarters, it comes with a complementary office that is furnished, with equipment like CCTV cameras for them.

”They need to have a conducive work environment for them to be truly committed to what we ask them to do even in the period of lockdown.

”We think it is important to handover this facility to the police so that they can begin to put it to immediate use,” he said.

The Commissioner of Police in Lagos, Mr Hakeem Odumosu, thanked the state government for providing the building, promising that security operations within the axis would be improved upon.

Odumosu said that the gesture was a challenge to the police to do better, as the equipment provided along with the facility would make policing from Maroko to Epe very easy to achieve.

”I want to thank Mr Governor on behalf of the Inspector General of Police for providing the Nigerian Police with this edifice and we want to assure him that security in this axis will not be the same.

”With the equipment provided alongside this building, communication will be better and we shall provide more men to join in the security of this axis from Maroko to Epe to complement the development which is also coming up fast in this area,” he said.

Afolabi-Adebanjo said the land being occupied by the command belonged to him, adding that he gave out about four acres to government for the development of the community and the local government as a whole.