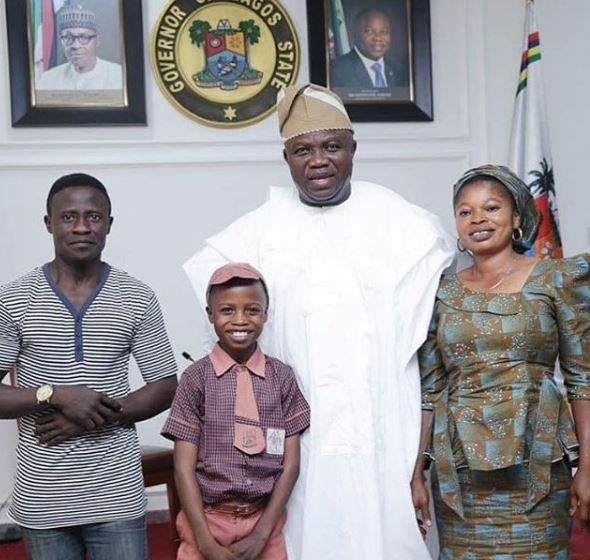 Governor Ambode, who hosted the artist alongside his parents, teachers, and instructor, promised to give him educational support, as well as help to nurture his talent to become a great artist later in life. The Governor also pledged to support Waris’ instructor, Adeniyi Adewole Wasiu, who is said to have an Arts Academy, Ayowole Academy of Arts, where he trains young artists.

Briefing journalists after the Governor hosted the artist at Lagos House in Alausa, Ikeja, Commissioner for Tourism, Arts and Culture, Mr. Steve Ayorinde said the development was basically to appreciate and encourage the young hyperrealist and as well to assure him of the readiness of the State Government to give him the needed support.

According to Ayorinde, “You would recall that Waris was one of the star attractions during President Macron’s visit to Afrika Shrine. Before painting the President and presenting the portrait to him, Waris had become a household name thanks to the special story done by a media house.

“So, the Governor has invited him and his parents to come and meet him and because the Governor is interested in his education and if you like the welfare of his parents, His Excellency has promised to assist just like he did to the Footprint of David boys who had a special performance at the State House during the Children’s Day.

“So, the Governor is interested in his school. We are happy that Waris is a product of a public school and you could see that the Principal of his school is here and she is happy. The Governor has also acknowledged the contribution of Waris’ mentor, Adewole who is here and because he also has an Arts Academy that inspired and produced Waris, His Excellency the Governor thinks that that Arts Academy should flourish and he is going to also support him.