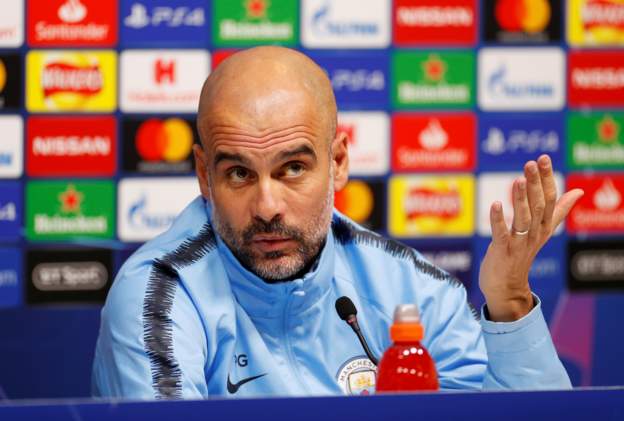 Pep Guardiola could walk away from Manchester City if their two-season Champions League ban is upheld, according to Emmanuel Petit.

Guardiola is widely revered as one of the finest managers in world football, having enjoyed unprecedented success during spells at Barcelona and Bayern Munich.

The Spanish tactician left Allianz Arena in 2016 to take up a new challenge in England with City, and has managed to add another seven major trophies to his impressive collection.

City have won back to back Premier League crowns under Guardiola’s stewardship, and set impressive new standards of excellence in terms of points gained and goals scored.

They were on course for more glory heading into the business end of the 2019-20 campaign, but all fixtures have been postponed indefinitely amid the coronavirus pandemic currently sweeping the globe.

Guardiola’s men are on the verge of reaching the Champions League quarter-finals at Real Madrid’s expense, and it could be their last chance to win an elusive piece of silverware for some time due to their recent suspension from all European competition.

The club have appealed UEFA’s ruling amid allegations of breaching financial fair play rules, with a final decision set to be made later in the year.

Petit, who played alongside Guardiola at Barcelona in the early 90s, believes his old team-mate could take the “opportunity” to “step back” from coaching if City are not granted a reprieve by the court of arbitration for sport.

“I think that could be an option for him,” the ex-France and Arsenal playmaker told Paddy Power. “It could be an opportunity for him to step back and have some rest. It wasn’t a long time ago that he seemed clearly tired of being a manager.”

Petit also raised concerns over City’s ability to attract the world’s best players if they cannot offer Champions League football, insisting everything they have built “could be ending soon”.

“You never know what could happen, but for me, the biggest worry is not what could happen if Guardiola leaves the club – there will be another manager coming if he leaves – for me the future of City is not linked with Guardiola forever,” the 49-year-old added.

“For me, the main worry is what would happen to Manchester City if the ban is still on the table after the appeal. Everything that City has been doing for the past five, six, seven years, in terms of investment. Everything they have been building could be ending soon. It could change everything at the club. Top players want to play in top competitions.”