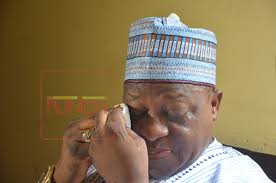 PA Defwan Dariye, father of a former governor of Plateau State, Joshua Dariye, has been kidnapped by yet to be identified gunmen.

The old man was kidnapped at his residence in Mushere under Bokkos Local Government Area of the state on Thursday.

The incident is said to have sent panic across the local community in Plateau and raised fears among residents.

A resident of the area, who confirmed the news to SaharaReporters said, “Information reaching me is that the father of a former governor of Plateau State, Defwan Dariye, has been kidnapped by heavily armed men.

“Insecurity is fast becoming a norm.”

A spokesperson for the police in Plateau, Ubah Ogaba, confirmed the incident, adding that they were already on the trail of the kidnappers.

Pa Dariye had in 2015 been also kidnapped at the same location but released a few days later.

READ ALSO: NO GOING BACK ON STRIKE – DOCTORS DARE FG