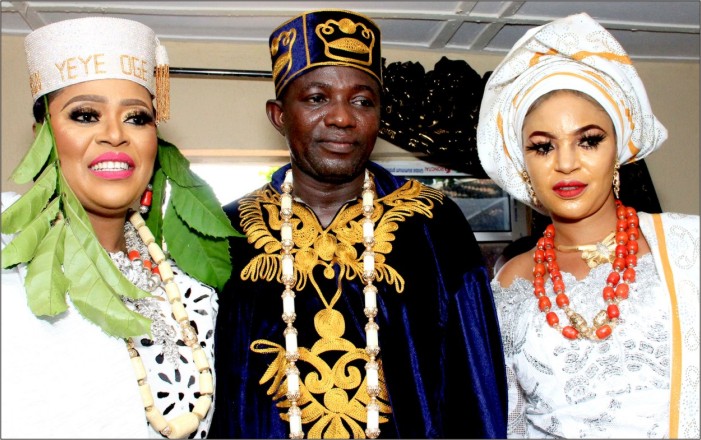 •As Over 50 Celebrity Women Storm IBOGUN

The Ibogun Olaoparun community in Ogun State witnessed a mammoth crowd on Sunday, November 20, 2021, as top celebrity men and women stormed the town for a talk of the town event. Oba Abiodun Fayemi Oguronbi was marking his first coronation anniversary and he did it in style by honouring top society women across Nigeria.

The event took place at the Ibogun Olaoparun community primary school and all the members of the community practically became onlookers as their cheer their favourite society women who bagged different chieftaincy titles from the stable of HRH, Oba Ogunronbi.

City People’s Brands Editor, DAMILARE SALAMI (08155134152) and Photojournalist, Abdulrasheed Sanni attended the event and here are excerpts from all that went down there, enjoy.

OBA OGUNRONBI AND HIS BEAUTIFUL OLORI MADE FASHION STATEMENTS

To start with, Oba Abiodun Fayemi Ogunronbi and his beautiful wife, Olori Adeyinka Fayemi Ogunronbi made serious fashion statements at the event. They both showcased the beauty in culture with their stylish and beautiful dresses. Olori’s first outfit was beautifully designed while lace with matching shoes and bag. Her second was a black gown with a touch of gold. Kabiyesi’s Agbada matched that of his wife.

History had the that the Alake of Egbaland HRM Oba Adedotun Aremu Gbadebo III was the one who crowned the Olu of Ibogun exactly one year ago when he ascended the throne of his ancestors. This was why it became very paramount for the paramount ruler of Egbaland to be present at the anniversary. However, it became impossible because the Alake had a personal event on that same day, therefore, he was ably represented by the Baajila of Egbaland, High Chief Dr Olowokere and the kabiyesi’s staff of office.

IYALOJA GENERAL MADE Statement With Entourage

The Iyaloja General of Nigeria, Chief Mrs Afolasade Tinibu-Ojo was one of the people that were honoured with a chieftaincy title at the event. She bagged the title of Yeye Oba of Ibogun Olaoparun Kingdom. She was not at the event due to an emergency beyond her control. However, she was represented by a powerful delegation of the market women. As a matter of fact, those who didn’t know her facially would not believe that she was not present. The women sang her praises and eulogized her as if she was seated among them.

Let’s gist you about how Dr Mrs Raliat Anako Abdulsalam, an astute politician, oil and gas guru in the downstream sector and a sports lover and her friend, Hajia Fatima Bello, the CEO of Jumrash Aso-Oke stormed the event in style. At their arrival, it looked like a new set of people were coming to take over the entire Ibogun Olaoparun Kingdom. They came in luxury cars with stylish chieftaincy attires and looked extremely gorgeous on the day.

MEET THE NEW YEYE OGE AND IYALAJE OF IBOGUN KINGDOM

It was not a surprise when Dr Mrs Abdulsalam bagged the title of the Yeye Oge of Ibogun Kingdom. One thing that was quite notable about her is that she is a very beautiful and stylish woman. She is also very fashionable too. She was the first to receive coronation and then others followed suit. Hajia had a lot of her friends, family and loved ones around her and they supported her well during the entire process of coronation.

Fast-forward to the next new chief, Hajia Fatima Bello; she needs no introduction because she runs a very popular brand, Jumrash Aso-Oke. As a matter of fact, a lot of people are more familiar with the brand than her face. She became the Iyalaje of Ibogun Kingdom. That title simply fits her. She is a business mogul who has been running her Aso-Oke brand (Jumrash Aso-Oke) for decades. Many celebrity men and women consider their parties incomplete if Jumrash is not handling their Aso-Ebi.

JUMRASH TOOK CARE OF THE ASO-EBI FOR THE NEW Chiefs

Many people at the event spoke so highly of the classy aso-ebi the new chiefs wore at the event. You can trust that it came from the stable of no other than Jumrash Aso-Oke. The Aso Ebi costs about 120 thousand for men and 50 thousand for women. The first attire was an all-white lace and Aso-Oke gele and cap. Only a few people would notice how gorgeous the women looked in their second attires. It was still courtesy of Jumrash Aso-Oke. The event cannot be less than classy with the calibre of people that bagged different titles.

Was this event a political gathering? Absolutely not but there were indications that political statements were being made. Some powerful members of the South West Agenda (SWAGA 23); a movement that represents the interest of Asiwaju Bola Tinubu who has the intention of becoming Nigeria’s next president, were identified at the event. Unbelievably, some strong and powerful society women were spotted in this group. Some of them include; Swaga Taiye Akinpelu, Hon Folashade Olabanji, Hon Adetoro Baiyewu, Mrs Paris Ado Sanusi, Mrs Gloria Jemedafe among several others.

The Owambe cannot be complete without cash spray. There was plenty of this at the event. Asiwaju Adesina started it all, he showered cash on the new chiefs. Yeye Oge, Otun Yeye Oge, Iyalaje of Ibogun and others were beneficiaries. City People also witnessed how Hajia Fatima Bello (Junrash boss) was spraying her friends. Was the Yeye Oge left out of the party? Definitely not, she sprayed as well as received. It was all fun for them while the onlookers enjoyed a party of a lifetime in Ibogun Olaoparun.

The vendors at the event did their best to satisfy their guests and their best was good enough. Spotted at the vendors’ stand was AY-3 Small Chops, Posh Foods Logistics, Ola Small Chops, Maclad Events and Caterings and several others.