Home Entertainment He Was My Boss For 3 Yrs Before I Married Him, Star Actress, IRETIOLA DOYLE’s Interview
Entertainment 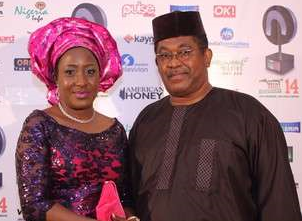 Ireti is also an award-winning TV Presenter and Producer who has hosted the fashion TV show ‘Oge’ for ten years among other presenting jobs such as ‘Today on STV’. She got married to Patrick Doyle, also an actor and producer in 1999 and is the proud mother of 5 children. Now in her mid-40s, Ireti is glowing and says she is comfortable with where she is. She recently granted an interview to Bella Naija where she shares intimate details of her career, family, children and experience as a mother.

The news making the rounds is that the marriage of top actress, Television producer, Presenter, Writer, Wife and Mother, Ireti Doyle has crashed.  The Tinsel star actress began acting in 1995 with her first role in the popular TV Series, ‘Riddles & Hopes’. She has gone on to star in other TV series such as ‘Circle of Three’ and currently plays the role of Sheila on the MNet hit series ‘Tinsel’our husband, Patrick Doyle?

I went for an audition in school; it was in my third year in the university. Patrick Doyle was the Producer and Director of the play at that time. This was a period of time when schools were shut excessively. Rather than waste my time and wait for school to re-open, I decided to do something meaningful, so I came to Lagos. I did an audition and got a role. I told Patrick that I had interest in writing. I also told him that I could write scripts, so he employed me on ad-hoc basis. I worked with him for about two or three years; he was my boss, then his wife passed on and the rest is history…

Does it get very demanding, being on the cast of a  frequently aired Soap like Tinsel?

Oh yes it does get stifling because it takes up a large chunk of my time. For every lead character on Tinsel, we know that our first commitment is to the show. On the flip side of the coin, Tinsel is the biggest Soap in Africa at the moment. You are seen by millions of viewers across the globe five nights a week. Money cannot buy you that kind of platform, so I think the pluses are much more than the minuses.

You’re also a well-known TV Presenter. Tell me about some of the shows you’ve presented and how you got into broadcasting?

Broadcasting happened by mistake. I was fortunate to be placed in a position where I could act and learn the rudiments of broadcasting at the same time. I had a job with a small production company and the task fell on me to design a simple television show, which I did, which turned out to be Oge and it lasted for 10 years. I produced as well as presented the show and that was where I honed my skills. From there I got head hunted to present a number of shows beginning with Morning Ride on NTA created by Danladi Bako and then there was Today on STV which I did for two years. That one too happened by mistake. I was to stand in for someone for two weeks and it turned out to be two years.

How do you combine your duties as a mother with the demands of your job effectively?

It’s not easy, every working woman knows that. Sometimes you have to sacrifice and sacrifice comes both ways. Sometimes you have to pass things up, sometimes your family has to come to terms with the fact that they won’t see you for a bit. But the first ingredient for a balanced life is grace. And secondly, I am fortunate to have a fantastic team where each member knows what they are supposed to do and thankfully, they do it well.

What’s it like being the wife of Patrick Doyle? How would you describe your husband?

Actually no big deal really. He is a pretty laid back person. He is not a very demanding person, he is very busy too with his own projects but as an individual, he is very supportive of the things that I do and he contributes towards raising the kids and running the home and all that.

I’ve never experienced any challenges; I’ll tell you why? I’m not a celebrity at home. I am a celebrity because you say I’m one. I’m a celebrity via the work that I do. At home, I’m just mummy and Patrick’s wife. And I will give you a classic example. Last year, I was part of a stage production that was big and popular. That night, we played to a full house, getting a standing ovation at Muson Centre. Do you know what that means? I got home at about 10 pm. It was my last daughter’s 10th birthday, so she had her friends around, five or six of them doing a sleep over. I got home at 10pm and those ladies were still waiting for mummy to cook for them.

I got into the kitchen and was frying dodo (plantain) and I looked at myself and was like ‘see star actress slicing and frying dodo at 10pm’. Motherhood is equivalent to playing to a full house and getting a standing ovation and coming back to fry dodo for five hungry 10-year-olds. So, that’s a leveler for you. Motherhood would calm you down. It doesn’t matter how; it’s a heady business. If you’re not careful, if you don’t have anchors, you might lose yourself. But I am blessed to have a large family that reminds me that ‘eh! Your responsibility is first and foremost to us. When you’re done climbing all your professional mountains, you will come back and fry our dodo. You will come and make that soup. You’ll go and look for those socks’. You need to come and see me at 6am when I’m trying to get my daughter ready for school. You’ll go under the bed trying to look for her shoes or socks. I’m a wife and mother first and foremost. No, I’m a human being first and foremost. Fame and Fortune are just a bonus, an added plus. It doesn’t define who I am.

I wake up at 4am every day, whether I have to be at work or not. And that’s a throwback to the days that I used to present on TV, because you have to be up by 4am, and go out by 5:30am so that you could be live on TV by 7am. I’m usually in the studio by 6am to be ready for make-up and ready to shoot by 7am. If it’s a very busy day, if it’s 15-scenes day, the day that you have upwards of 15 scenes, you know that you are not going home until about 6pm to 7pm. If it’s a short day, and I don’t have any other responsibility like a press conference, or a photo shoot or not engaged in any other production, then I’ll go home and chill. If you see me at an event, it’s either because I’ve been paid to be there or it’s done by someone I respect greatly, or that I’m enjoying myself. If I’m not working or if I’m not representing anybody, or being paid to be somewhere, I’m at home with my family, just chilling and conserving my energy.

You have 6 children, right? I mean your own children…?

Yes, between my husband and I, we have 6 kids but unfortunately, we lost one of them a few years ago to sickle cell anemia. It is well. So, we have five now.

He Was My Boss For 3 Yrs Before I Married Him, Star Actress, IRETIOLA DOYLE’s Interview was last modified: July 2nd, 2017 by City People

Meet The New 20 Housemates Of BBNaija...