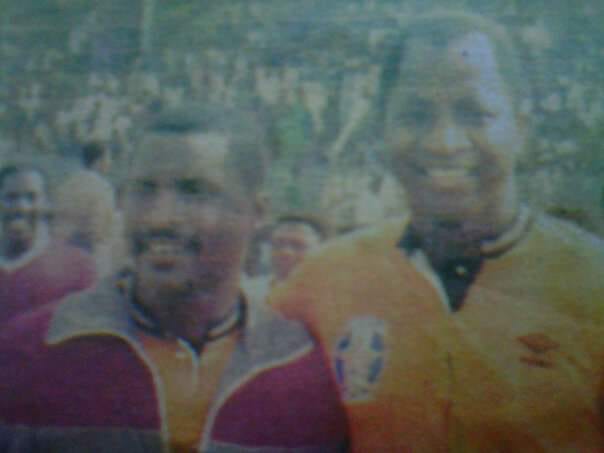 Until this morning, I had never seen this picture of Muda Lawal and I as young football players in Ibadan and in the national team.

Most people did not know just how close we were.
Muda joined me in Housing Corporation Football club in Ibadan from Lagos. He was a striker exuding unbelievable confidence in his football skills on the ball and great shots.

I was, of course, a star in Ibadan football at the time, after winning the State FA Cup with NTC, and, together with Muda, winning the Olubadan Cup for Housing Corporation. I was declared the Best Player in the Ibadan Football Association that season and was decorated at a ceremony held at the Olubadan Stadium.

Muda and I played our first ever international football match on the same day at the Liberty Stadium when the selected Western State team, called the Western Lions, preparing to represent the West at the First National Sports Festival later that year (1973) in Lagos, played against the national team of Central African Republic.

I don’t recall if Mudal scored a goal or not in the match or not, but itvwas a terrific experience and I scored one of the 3 goals we scored in the match that ended 3-0 in our favour.

That year, after the national sports festival, I was one of the few players invited to the national team, the Green Eagles, with Muda Lawal and Yomi Bamiro.

That move gave Muda Lawal the confidence to join the same team a few months, or so, later. As players in Housing Corporation FC heard stories of how any new strikers joining WNDC would have to contend with the Juju powers of a famous striker in the team at the time who would stop at nothing to get rid of the player.
Coming from Jos, I had absolutely no such fears. I joined, played in Kaduna during the FA Cup prelims, came back to Ibadan, and did not die, as expected.

Muda Lawal, Kunle Awesu, Best Ogedegbe, and Sundày Akande, the best players in Housing Corporation FC at the time, emboldened by my action and now less afraid, quickly joined me in WNDC Shooting Stars within a few weeks of each other.

So, Muda and I became club and national team playmates, and thoroughly enjoyed the football partnership on the field of play!

That relationship was fantastic and gradually grew into a friendship outside the field, stretching through the years till we won the African Cup of Nations in 1980.

One day, however, I was shocked to be confronted by my best friend, Segun Ogunbo, that Muda was dating his youngest sister, a beautiful teenager that none of us thought could, or should even have a boyfriend at the time, least of all a football player, knowing the impression the public had about the philandering ways of football stars. Segun was going to ‘kill’ Muda if he did not leave his little sister alone.

Segun Ogunbo was livid initially. Yetunde’s mum would not even hear of it. A footballer dating their precious young teenage daughter who was just about leaving secondary school was just not acceptable.

That I was a member of the family, a loved and respected one at that, a footballer also like Muda, was the calming balm. If I was not discriminated against, or looked down upon in any way, why should the family not accept Muda? After all, he was a very handsome, well behaved, megastar, loved immensely by the public. It was a big challenge in the family. The months became years and the ‘fight’ went on, Muda and Yetunde, nrelenting and unshaken by the turbulence of opposition.

I don’t know how Muda handled it, knowing that he was dating ‘my’ little ‘sister’, Yetunde, and that I would always be there monitoring his conduct and might report any misbehaviour to the family should it happen.

We were both in the same camps, and I would know about everything he was doing socially.
I don’t know if that fear had anything to do with his conduct throughout our years in various camps (the fear that he could ruin his chances with Yetunde should I ‘catch’ and report him) but I attest to his fine conduct and good character throughout that period (even though he could not have been, like me, a saint), and Ip truly saw nothing and reported nothing.

Muda behaved impeccably around me throughout our years in the teams and camps. As handsome as he was, a draw of female fans, a massive megastar, with him, there were no episodes or stories of philandering to tell.
Probably, that’s why, even as close as we were, he did not like hanging too much around me and my friends, as did Best Ogedegbe, Idowu Otubusen or even Philip Boamah. With me, he was very cautious.

My nothing-to-report attitude on Muda to Segun Ogunbo, must have helped in a way to douce the resistance to his relationship with Yetunde, even though her own obstinacy, her determination to stick to Muda’s love, her total commitment to the relationship despite all the initial misgivings by the family, broke every resistance and won her family over.

Mudashiru Babatunde Tiamiyu Lawal was a great guy, a worldclass football player, a complete gentleman, a wonderful father and husband, and a friend in whom I am very proud. May he continue to rest peacefully.

I thank Kayode Tijani from whose library this picture is unearthed.
I am.looking atvthe picture again and thinking to myself ‘me sef, I handsome too at dat time o, abi?’. 😜

Why We Prefer To Thread Eyebrows @...