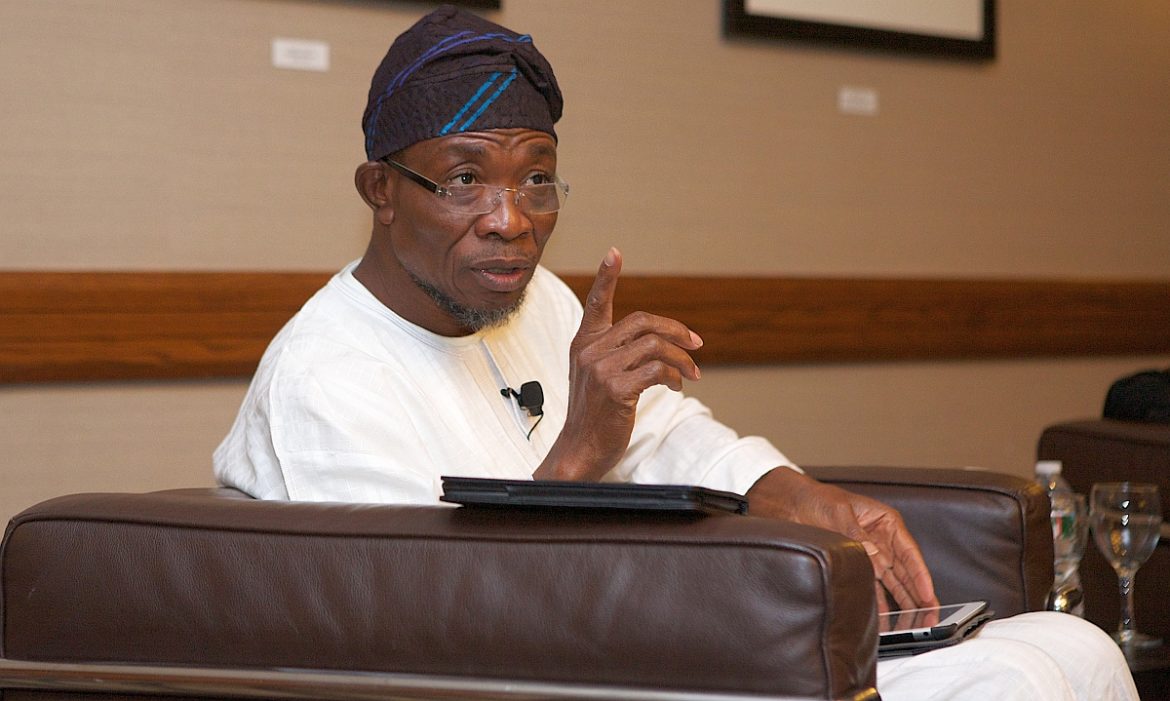 If he has his way, he would employ all employable in Osun State. If he has his way, he would reconstruct all roads in Osun. He knew Osun is not making anything in terms of revenue yet he never introduced any aggressive tax regime, he saw the need to bail the parents from the feeding of their wards. He chose to undertake it as a project. Schools and it’s structure were in shambles, he chose to do complete restoration and restructuring the schools in their entirety.

There are many different styles that are directly related to the leader’s personality and character, and many more that are a combination of several different philosophies. Many leadership styles, though, can be successfully implemented with a quiet approach.

Quiet leaders are powerful. They focus on action instead of words, and are able to generate excitement, encourage ownership and develop loyalty in unique ways. But it’s not easy to become an effective quiet leader. There are many factors that come into play if you are going to be successful at leading quietly. Then one must be adequately equipped with a serious kitchen cabinet that shares your principle and values for life and also your admiration for those you consider worthy…

Osun state is one of the states in the federation blessed with conscious people and very metropolitan and civil servants dominated. Take it or leave it, here in Osun, workers are mostly on government payroll, no industry or national establishments to lift burden on state or local government. People are predominantly farmers and every farmer and  civil servants do nothing but Politics and these include the electorates. It is always hard to make any artist or comedian laugh at any joke, so it is for any government in Osun to make people understand what you may think as paramount in service. People over the years are so used to Asamu Akeese (Collect& Share) style of government .

Governor AREGBESOLA came as a game changer, an unusual style of government and with serious intentions to put down his name in Gold. He saw the need to make a good state capital to attract investors, good and durable roads to make life comfortable for the citizenry. The uncommon man is a rescuer.

He could hear the groans of his people. He feels the pains of the workers. He is not a sadist, not to understand the feelings, anger and the hunger of the pensioners but alas he is working within very limited funds and with limited resources, he would only be appreciated only after he might have left office and only by those things he could put together and do within the lean resources. He may be appreciated by a few people with conscience……

How many people know he no longer gets involved in the manner at which salaries are being paid? A former labour leader is today saddled with the responsibility, he sits with Osun Labour leaders on monthly basis and they do the sharing as it comes in monthly, the same set of people are expected to douse the politically mounted tension and to relate back to their constituencies but the man at the receiving end is still the Chief Servant, Ogbeni Adesoji Aregbesola. Bail out came as usual ,it was followed with escort and from its origin by workers, I love them for that, they don’t want to take chances.

I’m so glad that it was monitored to the nearest kobo, and here comes the usual face to face sharing,  this time with an additional 2Billion naira, shared only by the same workers, no monarchs or palace is designed to benefit, although campaign usually starts in their palaces and no representative of mechanics, vulcanizers or those market women who equally reside in the state, their crime is that they are not pensionable and can not protest….The  workers must be paid.

The governor shared in their grievances and so  do I.  and also in their plights …. Serving in its cabinet at both the state and local government levels is no longer enviable. No single payment till date was made for their upkeep, those who are recently lucky to be sworn in by him are equally groaning as much as himself. Every Omoluabi groans underneath along with our dear servants of the civil service. They must be paid their wages, o say our Lord.

Those developmental works across the state  must also continue for he Aregbesola must endeavor to complete all those things that once endeared him dearly in the state before the sudden economic recession and decline in the nation’s earnings. The people had forgotten so soon that he, Aregbesola, at a time paid 13th months salary, such is life. As he groans, the contractors must  go back to their sites to make him a fulfilled person, yet they too must be paid, thank God, they are not empowered to protest, for that seems to be the order of the day now in Osun state.

They should better be groaning in silence and am sure many economists would be also be wondering how many manufacturing companies could spring up with just about 10 Billion Naira in Osun state to reposition the state revenue for a better tomorrow. Government and its work of course must continue but workers are the most paramount in his mind, they are the set who can protest and easily cave in for penetration by politicians for their selfish desires which is usually to bring down the ruling government.

The pensioners also formed part of his worries, they must eat from the bail out which was usually done unnoticed in the past by government in power and to any state they so desired, the reverse is the case under “change and change” government. No matter how little, pensioners must be paid to have enough strength to go on the street to call the governor names that he does not deserve and also to target a good day to protest to cause him embarrassment….Who is that governor who will grow fat in these circumstances?

Check him out, he does not even look like a governor, appreciating him or his government is a story of years to come.

I MAY DISAGREE WITH SENATOR OMISORE POLITICALLY, SOCIALLY WE ARE ONE …WE CAN’T FORGET OUR ROOTS…

I am still in shock to see that in this clime election seasons always seem to be rough on friendships, this is utterly regrettable. We must learn to align with the fact that friendships and families are actually too precious to throw away for transient reasons.

So many people I know are getting into Facebook fights, Twitter wars, Instagram arguments, and Snapchat squabbles. What begins as an ideological dispute ends in bitterness. People are provoking others, demanding those who do or don’t support their candidates leave their networks, cutting ties with friends and family, and all because of political differences.

People perceive the stakes this year and beyond to be that high or even higher. To be sure, political philosophy does matter and does carry high stakes. However, the partisan struggle for the control of the Federal, State and LG apparatus by this or that temporary manager doesn’t matter as much as election season seems to suggest. You might observe any dissatisfaction in the conduct of any electoral process or feel manipulated or marginalized which is understandable, however friendships and families are actually too precious to throw away. It’s a pity to cause permanent rifts, which is so unnecessary and needless.

To specifically put the records straight my relationship with my elder brother and kinsman, Senator Iyiola Omisore is purely on social ground and it has nothing to do with politics. We are both of Ife origin and Ife has no political colouration as far as I’m concerned. The video which has been trending on the social media where Ayinde Marshal was pouring encomium on me and Senator Omisore was captured at a social gathering merely on a principle of work-life-balance.

Those insinuating erroneous political affiliation out of that must be accordingly guided and please desist from spreading such falsehoods. I will never deny or treat with contempt or disdain anyone very close to me for any reason, people must also know that myself and Otunba Omisore both served Ife at the National Assembly, he was in the Senate and I served in House of Representatives, and we appreciated each others contributions at that level. Again the Yoruba culture is very clear on respect for our elders, and for those who know me very well, they will attest to the fact that I put Ife first in everything I do, I was born because of Ife and that will never be compromised under any guise. The reality again is that politics is local and grassroots inclined; and as far as Ife is concerned, Omisore is a factor. I should even be glad that the likes of Omisore are even seeing the potentials in me at a time like this.

One thing is very clear about me, I came into politics through the Almighty God and God might have used some people to bring me into politics, of course Ogbeni Rauf Aregbesola, my Governor, my leader and my mentor, is a key phenomenon who facilitated my political relevance and all I have become in life politically, indeed I remain loyal to him and our party APC, these are facts that can never be suppressed or misrepresented.

It is also true that everything about me is designed by God. My steps are ordered by God. I make bold to say that what I have achieved in my entire life are by the grace of God. Whilst I was in private and public sector performing my legitimate duties records show that I do my work with all my energy and passion for the good of all. For some people to say I wanted to be deputy governor, I don’t know anything about that. I have heard about it, but I know that when the time comes, where God says I would go, that is where I would be. However, I am not over-ambitious. I take each day as it comes, God will define my path and I can never be disappointed.

Hon Rotimi Makinde represented Ife Federal Constituency at the House of Representatives (2011-2015). He is a member of the ruling APC in Osun State.

HEART OF THE MATTERS WITH HON. ROTIMI MAKINDE: AREGBESOLA, THE  GROANING SERVANT was last modified: July 31st, 2017 by Rotimi Makinde