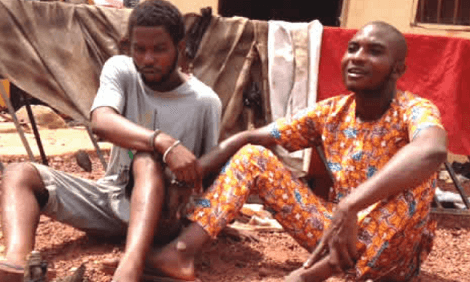 Two suspected fraudsters, who specialised in masquerading as herbalists to defraud unsuspecting members of the public, have landed in police net in Enugu. The suspects identified as Akin Ogunsemi and Shina Fatola were said to be indigenes of Ijebu Igbo in Ogun State.

Police Public Relations Officer, Enugu State Police Command, Mr. Ebere Amaraizu, disclosed on Friday that Ogunsemi and Fatola were apprehended at Ukwuoji, in the Emene area of Enugu, on May 1, 2018, by men of the police Anti-Cult Unit.

Amaraizu added that the arrest of the two suspects was based on intelligence concerning their activities.

He explained that the duo specialised in masquerading as herbalists to swindle their unsuspecting victims and dispossess them of money and other valuables. Items recovered from the suspects upon their arrest are some fake foreign currencies, charms and other suspected shrine materials.

Herbalists In Police Net For Fraud was last modified: May 5th, 2018 by Reporter

Buhari made me the governor of Ondo...