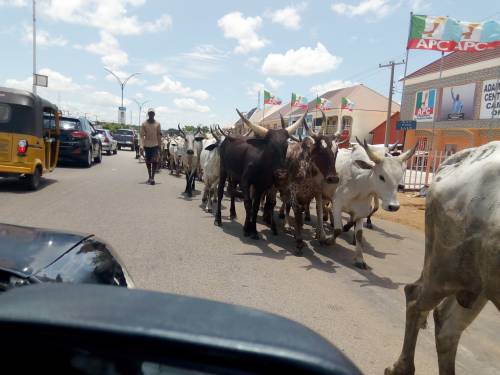 The busy Bank Road in Yola, capital city of Adamawa State, was on lockdown for nearly an hour on Monday as herdsmen took over the streets with their cattle.

Motorists, who were forced to drive at snail’s pace behind the cattle through the city’s business district, could not fathom how this is possible on the streets of a metropolitan city in the 21st century.

At Fire Service roundabout, the frustration of road users almost degenerated into violence when one of the herdsmen guiding the cattle moved to attack a motorist whose only offence was honking to scare away the cattle from the speed lane.

This only averted a violent clash as the furious, battle-ready herder had his sword drawn out and looked prepared to strike. Surprisingly, he got away with it.

Also, just before the Central Bank gate, security operatives attached to a bullion van had difficulties manoeuvring the van into the CBN premises, as the cattle were right in front of the building at their time of arrival.

“Cattle have become the nation’s senior citizens,” an outraged motorist said micklingly. “That’s why they can occupy strategic places, including highways, with impunity.” 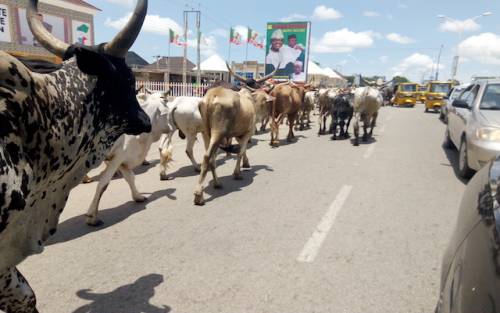 A bus driver recently escaped death by whiskers when he rammed into a horde of migrating cattle on the Jimeta bridge. The driver had to jump out of a moving vehicle when he saw a sword-wielding herdsman running towards his direction.

SaharaReporters was unsuccessful in its efforts to get official comments from the agency saddled with the responsibility of controlling the movement of animals, as officials of the Ministry of Environment played a hide and seek game by referring our correspondent to higher authority.

The Director of Waste Management and Pollution Control, in particular, declined to comment but provided the phone contact of the Deputy Permanent Secretary, who in turn referred Sahara Reporters to the Commissioner, whose phone number was switched off when he was called.

READ ALSO: JOSE MOURINHO HAS THE BACKING OF MANCHESTER UNITED BOARD DESPITE DEFEAT