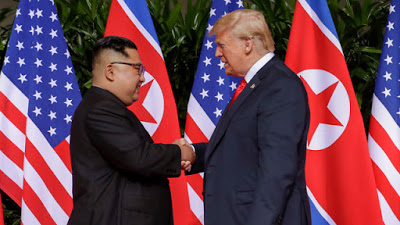 US President Donald Trump put his extraordinary gamble with North Korea’s Kim Jong Un to the test on Tuesday, sitting for unprecedented and surreal talks with the kingdom’s despotic leader in what he hopes will amount to a historic breakthrough.

Trump and Kim signed what the US President called a “very important document” at the conclusion of their landmark talks.

Trump said it was a “pretty comprehensive document,” but didn’t offer details on what it contains.

He said he would discuss it “at great length” at an upcoming news conference and indicated it would be made available publicly.

The two men — both intent on making history — greeted each other with extended hands in front of a row of US and North Korean flags, a previously unthinkable sight that reflects a new chapter in the two countries’ acrimonious relationship.

What Many Don’t Know About Late OSHOFFA...