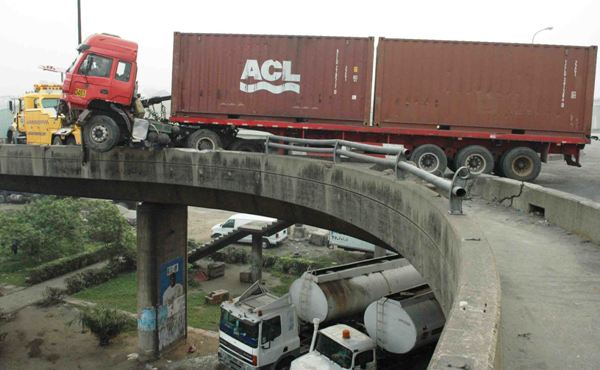 A middle-aged man has been reportedly killed by a hit-and-run truck and his body was found at Costain area of Lagos on Wednesday, the News Agency of Nigeria (NAN) reported.

An eyewitness told NAN that the man, believed to be a tout operating in Apapa area, was killed while trying to extort money from a trailer coming from the port.

“The trailer was coming from Apapa, after passing through Ijora, the man made attempt to collect money from the driver of the truck.

“They were still arguing while the truck was moving, when they got to Costain after National Theatre Iganmu gate, the man fell off the truck and another truck coming behind ran over him.

“The truck ran over him before 7 a.m. today and he died immediately,’’ the said.

The corpse was removed from the scene near the entrance of National Theatre at 2 p.m. on Wednesday.

The police spokesman in Lagos State, Chike Oti, told NAN at 1.05 p.m. that the command was yet to be informed of the incident and promised to contact the police division in the area for update.