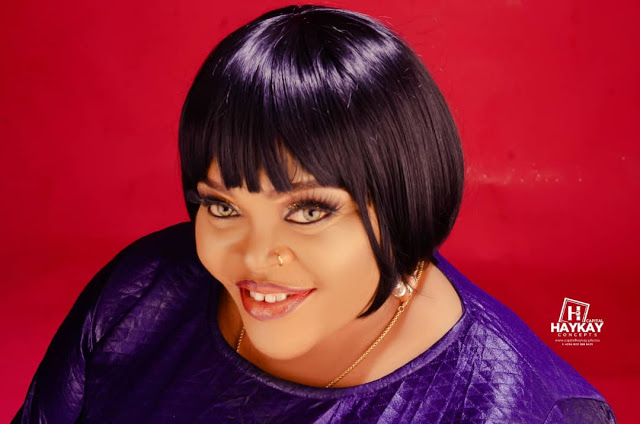 Allwell Ademola is one of the most talented and hardworking actresses in Nollywood. She is hard working. She is creative also.

But she does not make a song and dance of how good she is. She has remained very humble about her accomplishments. Not many even know she has put in 27 years into her acting career.

She is multi-talented. She is a damn good movie scripts writer. She acts well. She produces movies. She has produced 4 this year. And she is great at directing movies. She has directed very many.

She is good at what she does. She is good at playing all these 4 roles well in the movie industry. She is very productive & prolific.

She spoke to City people a few days back and revealed her success story.

We asked her how 2019 has been for her professionally.

Progressive, it’s not like I have achieved all I aspired for the year but then I thank God so far. How many of her jobs came out this year?

Four Movies Produced by me and Quite a lot directed by me.

You are into scriptwriting, acting, producing and directing. How do you juggle all these roles?

Well they are into each other, Scriptwriting, acting, Producing and Directing are all film making. Scriptwriting is basically Pre-production.

But you seem to be concentrating a lot more on directing. Why?

Because a movie director is a person who directs the making of a film. A director controls a film’s artistic and dramatic aspects and visualizes the screenplay while guiding the technical crew and actors in the fulfillment of that vision. I have always had crazy visions as a child, I believe in make-believes and I also don’t believe in impossibilities. It’s a funny belief that directing is masculine but in reality, it has no gender.

What has kept you on in the movie industry? How many years now?

God and hard work have kept me. I have been on TV since 1985 courtesy Animal Games with Uncle Wole Akinosho of NTA and Tales by moonlight. I featured in my first film in 1992 (The draught promise)

Now she has gone into fashion. What explains this?

I have always loved simplicity in fashion. But most times we plus size don’t get what we really want, so since most times fans and friends see some of my designs and ask “oh you look good who made your dress” so I felt it would be nice to turn it to business.

Do you cater to only the plus size?

No, I make for all sizes, even kids

Your surname sounds foreign How come?

Allwell is my first name, Ademola is my surname. I am a Christian and most Christians have English names, like Joy, Peace, Mercy, Happiness, Allwell, etc.