How Apostle JOSEPH AGBOLI Was Buried In LAGOS 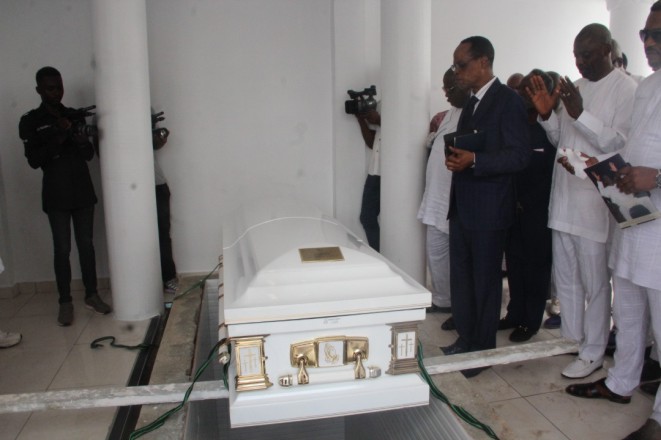 Popular pastor and founder of the Victorious Army Ministry, Apostle Joseph Agboli, has been buried in Lagos after 3 days of funeral rites. Thousands of mourners attended the burial service at his Acme Road, Ogba, Lagos church. The 58-year-old died on 25th August 2021 after a brief illness.

God’s General, as he was fondly called, was revered by people from around the world and tens of thousands of people attended his weekly services across the nation. The death of Pastor Agboli revealed how much he’s loved. Many great men and women from around the world came to witness the burial ceremony and to pay their last respect.

The burial ceremony took place at the church building at Acme Road, from Friday, November 25 to Sunday, November 27, 2021, and the Ogba area witnessed a large gathering of people who came to pay their last respect to God’s general. City People’s SEUN JOSEPH brings you a blow-by-blow account of what went down at the final burial ceremony.

Renown pastor and gospel singer, Faith Ajiboye, lightened up the Night of Praise held in honour of the Late man of God, Apostle Joseph Agboli, the founding father of the Victorious Army Church.

The pastor mounted the pulpit and kept all congregation spellbound with sonorous songs to console family, friends and members of the Victorious Army Church. He held the late man of God’s son, who was also seated with his mother on the podium, and engaged him in consoling numbers as they both echoed several comforting songs; “Take it to the Lord in prayer, My life is your hands, Immortal Invisible God only wise, Under the solid rock and many more songs that got all members on their feet and their hands raised up unto the heavens”.

He maintained the high praise for no fewer than forty minutes.

HOW MY HUSBAND PREPARED ME A YEAR BEFORE HIS TRANSITION – WIFE, PASTOR BLESSING AGBOLI

The widow of the late founder of the Victorious Army Church, Apostle Joseph Agboli, a.k.a The God’s General, Blessing, during the burial ceremony, said the death of her husband was an act of God.

His widow, while speaking at the praise night, said the death did not come to her as a surprise. She maintained that God’s general was never afraid of death because he knew where he was going.

She said, “What happened was an act of God. There is time for everything, like my husband would say. That was the word I knew from him very well. This is the job he was known for. This is what he was living for. That is what he was going to die for. He knew before he started preparing me for this journey for about a year ago.

Just a few hours before his transition, he held me by my hand and said, “Woman, you can handle this! But forgive everybody.” This was someone who doesn’t talk too much or eat anyhow. He used to counsel between 150 and 300 people every day. He is fond of saying “Satan, Let My People Go” We know his spirit will not leave us and we rejoice rather than mourn.

‘Apostle Joseph Agboli’S Death Is Not An End, But An Entrance’ – Pastor Matthew Ashimolowo

Pastor Matthew Ashimolowo graced the praise night in honour of Apostle Agboli in Lagos. The KICC senior pastor told the church that the gathering of the night was not to mourn but to celebrate the good works of God’s soldier who has concluded his work and has transferred the grace unto his wife.

Speaking at the Praise Night on Friday, 26 November 2021, Pastor Ashimolowo congratulated the church and the wife of the deceased that the late Apostle had succeeded in transforming the church that started small into a formidable prophetic structure that will remain as strong for many years to come. He referred to the late Apostle as God’s soldier who illuminated the grace of God and His power and whose life should be emulated by others.

“He was God’s general who started his ministry from his living room. Look at where God took him before he was translated. Glory to God “I am very much certain we will envy Apostle Agboli if we have the grace to see him now. He added that death, in the case of Joseph Dominic Agboli., should not be seen as an end but an entrance. “He left here and he’s in a better place. “He’s looking down and praying for the church as he’s here with us”. Pastor Ashimolowo also spoke of a life sold out to prayers as the secret of Apostle Agboli’s hugely successful ministry. He literally turned his church to a Jerusalem of some sort as pilgrims from all over the world came in droves to the Victorious Army Church to find out what the secret of such church growth was. He also took time to pray for the church and interceded for uncommon divine visitation for the wife, Pastor Blessing Agboli

The congregation came alive when popular high praise singer, Evangelist Bidemi Olaoba took to the stage and rendered high spiritual praises that he is known for. He kept the people on their feet for about an hour and there was no dull moment. His brilliant performance was one of the high points of the event.

Apostle Agboli’s final ceremonial progression raised treasurable memories of his life among family, friends and the church. The deceased children rued the final departure of their father, struggling in their grief to deal with the humbling reality that their father had finally set out alone into eternity.

Apostle Agboli’s cortege was joined along the way by the most important people in his life. They walked behind his remains, and then, so did representatives from churches and the government representatives. The deceased would definitely turn in his grave for the honour and unrivalled show of love that his beloved sons and daughters gave him.

ABOUT THE ALL-WHITE FUNERAL SERVICE

The funeral service was indeed a glorious moment for the deceased as the church adorned all-white outfits in honour of God’s general. The hall was looking all grand in white, as the ushers, choir, operation team and the entire congregation were all purely in white apparel to show their solidarity for a man who has indeed conquered death.

Popular gospel singer, Big Bolaji was present at the funeral service and put up a wonderful performance in honour of the late Apostle Agboli. He did a little bit of anchoring and introduction while he remained on the podium to coordinate the choir.

The Trumpet Band of the Nigerian Police Force also showed up and staged a wonderful performance on stage. The band also followed the white dress code and did a couple of solemn numbers to honour the late general.

Popular gospel singer, Joe Praise stormed the service in grand style and put up a thrilling performance in honour of God’s general.

IT WAS A GALAXY OF PASTORS

The funeral service was graced by men of God from all over Nigeria. Others who could not make the program sent in representatives. Some of the pastors include: Rev. Samuel Olubiyo, Pastor Success Igbokwe, Bishop Taiwo Koko, Pastor Amos Obidare, Rev David Esosa, Doctor Patrick Alli, Pastor Sade Ogundare, Pastor Bayo Adewuyi, Evangelist Efe Emeka

How Apostle JOSEPH AGBOLI Was Buried In LAGOS was last modified: November 29th, 2021 by Seun Emmanuel