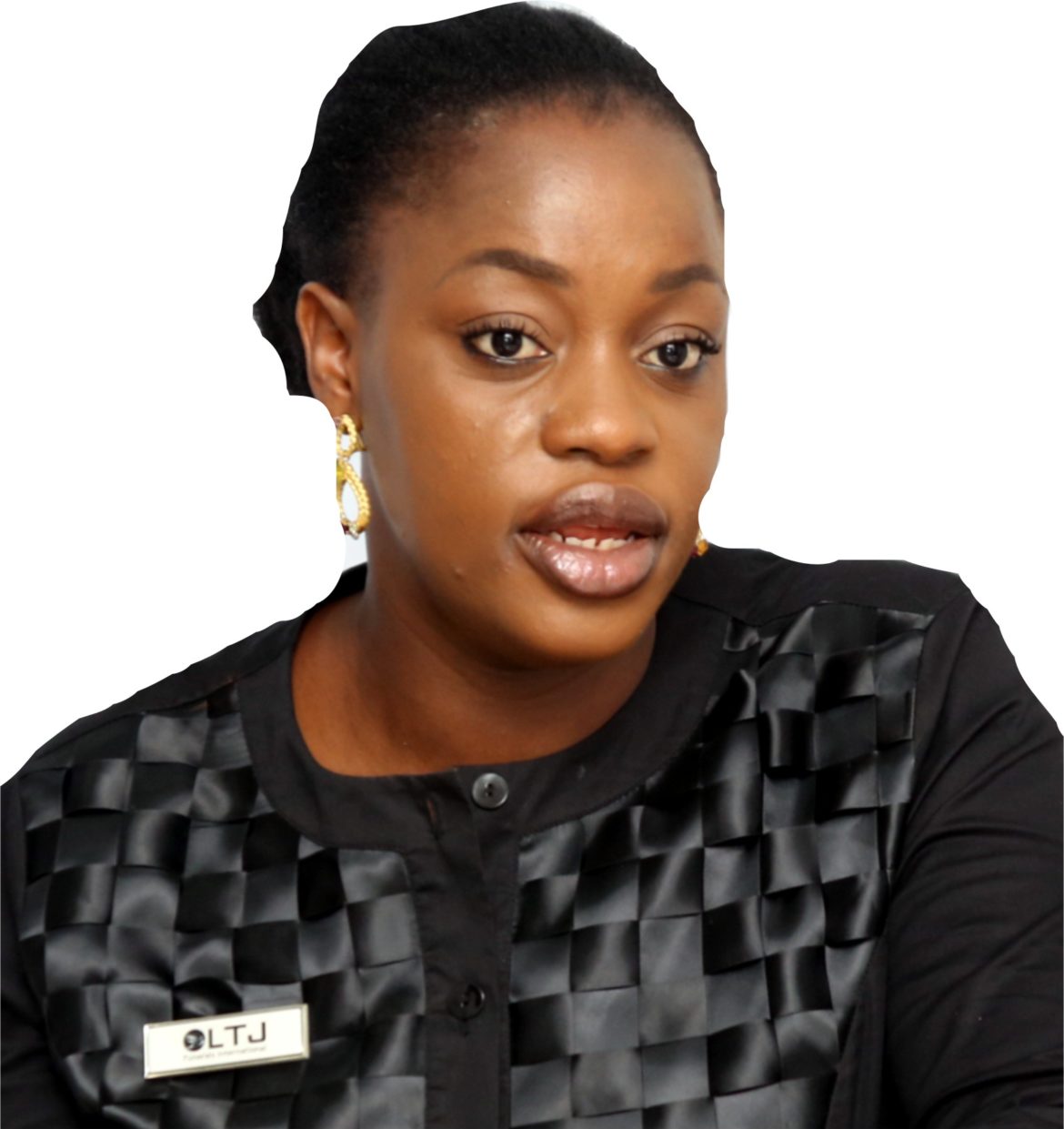 Bolanle Okusanya Feyita is one of the leading funeral directors in Nigeria. She is the daughter of the famous MIC boss Tunji Okusanya who died years back in a plane crash. She started her own funeral business after the death of her father and called it LTJ Funeral International.

She was recently our Guest on City People Instagram Live Chat with the Publisher, SEYE KEHINDE and she revealed how Covid-19 has changed the way burials are done now. Below are excerpts of the chat.

How has it been since the lockdown started?

It’s been a very interesting time, a very different time. There are lots of uncertainties at the very beginning. Later on, we were able to come up with different ideas. You know there was a rush when the government said you have to do your burial in 2 weeks, so, we had that challenge. After that, we now faced with the reality of how do we do funerals at this time. How do we learn a new way to beehive?

It is generally believed that in a lot of countries people spread Covid by funeral; attending to each other; hugging each other, shedding of tears e.t.c So, we have to learn a lot on that, so, it is been a serious learning period for us.

So what are your findings, and what is the advice that you give?

It is highly better at this period to state your priority. Before Covid-19, many people’s priority is that, if they could buy cardboard box and put the body in, they would do that, and their priority is to buy Aso-Ebi, the band, the small chops, the drinks, and the party that has been their priority, but now the priority is to do the burial itself, in a simple and dignified way as possible. So, the priority of lots of people has changed.

Then you also have a situation where a lot of family members will not be able to come because of the lockdown. The freedom of movement were restricted. That makes it a different case. We have to document it properly. We have to have photos, we have to have a video, also a lot of people are relying on the live stream. We did a funeral recently where none of the children were present and of course, that before was on heard off, but because of the situation on ground, we had to do it. So things are really changing. It has also changed for us with the way we work with the family. We have to be a lot more compassionate, we have to be a lot more flexible. We have to do a lot of video meetings because we have family who lives in different countries, Nigerian lives all over the world. So I have had several video meetings, zoom meetings, conference meetings in the last 3 months.

Normally, I will just tell you “come to the office at 2 O’clock, and have a look at the casket.

But now we are having a meeting at 9 am to 12 midnight because that is when the key decision-makers are awake, so, these are things we really need to consider. We are doing a lot more in the use of technology, a lot of common sense and compassion. We also have to be safe, because one of the challenges we have is the fact that some people still think Covid-19 is not a big deal, that it is the problem of the rich but it is not, we have to be honest with ourselves now. Covid-19 is real.

What kind of advice would you give people that are trying to bury their loved ones. What are the best ways to go about it at this time?

The first thing is to decide on their deal breakers. What are the things that are important to them? Some families now have decided that under no circumstances will their loved one be buried in their absence.

So they have to make sure that the mortuary can keep the body for a long time. Some people have decided that within 2 weeks or 3 weeks we have to do this funeral. Whatever it’s going to take”. They believe instead of spending money on the reception and entertainment hosting people, they would rather convert the money to host live streaming, so whenever they are in the world, they will know what is going on. These are things people didn’t consider before. So, they are now looking at it in a very practical way.

Thinking of other ways when you are inviting people. Gone are the days when you do an Obituary and you say church service is at so, so place 10 am on Friday. We don’t do that any more. It is now funeral service is at 10 am on Friday then you put the Zoom details. We had a funeral when the family had allocated very strictly their 20 people and one Uncle came with 11 people, they have to have bouncers at the entrance to restrict people because they are not allowed to host more than that and they don’t want the government to disbound the funeral. So, these are the challenges that people have to think about; who are the most important? Who are the people that are more vulnerable? There is no point for people to come for the funeral and after that everybody has some sort of ailments and all that. Some people have underline diseases they don’t even know about.

Let’s talk about LTJ funeral international. You have really built the brand, how many years now?

It’s 5 years. I am very grateful and I thank Him for all He has done for us; because unless the Lord builds the city, they labour in vain those that build it. I am very grateful. LTJ funerals were set up in memory of my father and my brother who passed away in a plane crash on their way to a funeral. As a result, I am a 3rd generation funeral director. Our story is a story of compassion and grace. Our core belief is the 3 things we always talk about; Excellency, Compassion and Integrity. And I believe that has really helped us to go a long way, and to where we are today. We genuinely care. When potential clients come to us I always tell them to go around to different funeral companies, have a look at what fits what you need, because the funeral is very personal.

I remember when my father and brother died, the experience of burying them was very different and I can’t replay that experience again. For us at LTJ, it is important; whatever you want to do, think it through. There has to be compassion, not everything is about money, there has to be something that is driving you. For me personally, LTJ is about serving people, about helping people at a very difficult time.

When people are bereaved is a very sensitive time and you have to help them think. Most people are used to planning a celebration like a birthday, wedding because there is a lot of laughter.

But when it comes to a funeral, it is a different emotion. Your motivation has to be more than your desire to make money. So, at LTJ, we are very grateful. We have had a lot of experiences, we have gone across Nigeria.

Can you share with us some experiences and different ways of doing burials now?

With Muslim, when I was younger, we used to think that when somebody died as a Muslim, they have to be buried on the same day, now people do it as a matter of convenience. If it is not convenient for them on that day they do it on the day after. Ultimately, I have noticed that people make a decision based on what is convenient for them. It is not always this is what I want or by religion anymore, it is what is convenient for them. Also, I have realised people want something more structure and decent, not just people carrying a mat and throwing the body around, people want something more decent and dignify. With Christians and people of no faith, they are also changing. People are becoming more flexible. We did a funeral of 80 years old woman and if you see the look, you would have thought it was a child that died, they were so distressed. Before once it elderly you would assume that it is singing and dancing, but now, people are really taking their time to see what works for them. We have people who are young, who are under 40, 50 and it is a big celebration of life. That didn’t use to happen before. Somebody who is under 50, you will think it will be very sorrowful; people are so comfortable in expressing what they believe these days. We did a funeral of a lady who was 40 plus and it was like a carnival. They had food for days, feeding people; as far as they were concerned she has run her race, she has done her best, in fact, they picked different kinds of Aso-Ebi. Also, there is no such thing as this is how to do a burial. It depends on the family, it depend on the part of Nigeria; in Nigeria, we have so many tribes. So it is very dynamic. People are also thinking in advance now, coming to the reality that life is not forever. And they are more willing to talk about it. And even if they are not willing to talk about it.

Their children are talking about it because so many people keep coming to us and their parent are very much alive, but they want to start talking about their funeral and start planning, unlike before people would say if somebody die don’t worry the money would come, but now people are becoming more structure about it.

Somebody called me on his 80th birthday and told me exactly what we want at his funeral and he died at 84 this year. You can imagine. Every year he would call me on his birthday, ever since we met at a funeral. He would tell me “Ale ti nsu o”. I am talking about a very loving and respectable Reverend, who was loved by so many. He would call me every year that he is old already and I should not forget everything he discussed with me, and fortunately, he passed away earlier this year. You will agree with me that wasn’t common before.

He told me specifically what he wanted and what he doesn’t want, and when he died everybody cooperated with my directive, even the children, because they are aware that he calls me every year. They didn’t even disturb themselves, they just came and we planned out everything. The truth of the matter is that, unless Jesus tarries, we are all going to die, it is just a matter of time but we pray the Lord satisfy us with long life.

How My Stage Name, SENWELE JESU Became A Big Brand

REVEALED! The Other Side Of Me People Don’t Know – FUJI Music Star, SULE ALAO MALAIKA