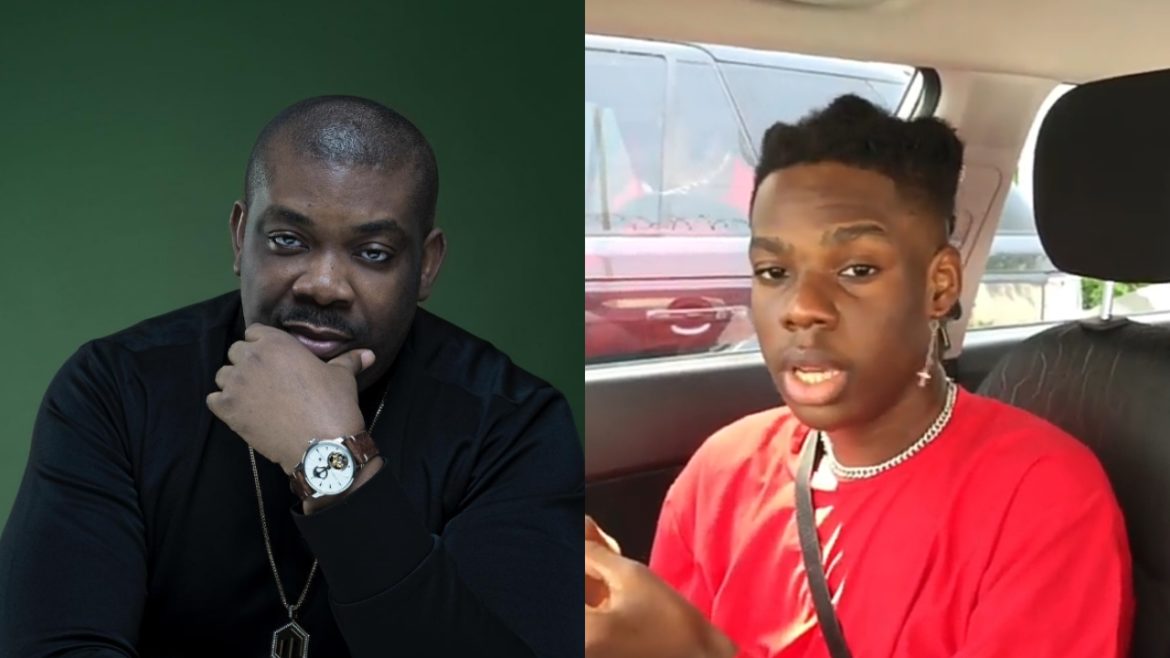 Everyone calls him Rema, but his real name is Divine Ikubor. The 18-year-old singer and rapper signed a record deal with Jonzing World, a subsidiary of Marvin Records, last year. He rose to prominence with the release of a song “Iron Man”, which appeared on Barack Obama’s 2019 summer playlist. Rema, who is currently one of the hottest in the sector, has been in the game for less than a year now but is bigger and better than many he met on the turf. He is also a very spiritual person, who doesn’t joke with God. City People Entertainment Reporter, PRECIOUS POMAA, recently had an interview with him in which he talked a lot about his journey in the industry.

So, Rema tell us what inspired you to do music?

Firstly I will say its God and second I will say it’s my background because there was nothing else to do after so much, lost between my family and the outside world. There was nothing else for me to run too, so, music was the only thing that could help me interpret my feelings and pains. I was also mostly inspired by emotions that’s how I felt. Music actually helps me speak because there are some words I can’t say making sentences, but while singing, I can say them freely. Permit me to say that music is my helper.

Talk about your song, lady what was the real inspiration behind the song?

I was riding in a car with D Prince and he played me the beat and it was like he liked the beat, but he felt I could do something better since I have a new sound and new wave. So, I asked for the beat and said I will see what I could do, then I wrote the song and mixed so much of my culture, in it because at first Dumebi is filled with Igbo and Yoruba. So, I felt I should infuse my culture into my next hit single, which is Benin language

I am from a family of 4 because we were not many but I lost some family members but life has been amazing but was hard at some point, that was the reason I had to leave the house to work hard and make my mom proud. It actually affected my schooling because it was hard to cope focus, my mom had so many worries and she couldn’t pay my fees and other bills, so it became a mix up for me. I had to shuffle school and work, so I could make things work, out but now no one would believe that this is me.

How where you able to shuffle school and work?

I didn’t fail in school, I came out with good results because I am actually smart. I wouldn’t say I am super intelligent, but just take it that I am smart and I know my ways around things, I also got assistance from my teacher, Uncle Eseosa. He actually helped me escape school sometimes to go for my studio section. The way it was going I felt that music was going a long way for me, being accepted and giving ovation gave me hope.

So, tell us how did you meet D Prince?

I did a freestyle for D Prince Gucci gang, at that point freestyle was going a long way, but many for people were only doing it for the bigger names out there, but I was actually picky and I thought I should go for something different, something not on the radio or TV, but low-key so I went for D Prince. I went to his page I saw that he released a new song, I quickly called my producer and I told him to remake the beat and I did the freestyle and the next day I got a call from D Prince and here I am grateful. In life, all you do is think fast.

I faced no challenge, but it’s human nature to be better than your yesterday and that’s what I always tend to be, I really didn’t see such as a challenge, but a problem, they are two types of challenges which are, challenging yourself to do better and then challenge a problem that you face, but mine was the challenge of being better than yesterday. It was really not a diplomatic problem it was just me trying to go round that’s why the sound is never the same. As I come through with different sounds every day.

How did you feel being big in less than 6 months as all your songs became hits?

Yeah, I actually expected it because I worked really hard for it, having sleepless nights, prayed, gave my seeds, tithes and left the rest for the lord which gave him no other option to bless me. It is actually spiritual how I found myself in the midst of Don Jazzy and everybody in a blink of an eye, everything worked very fast for me. I wouldn’t say I expected it no more but everything that came to me I deserve it, I am really not the kind of guy that like to post on Instagram, the only thing people see about me is my music and my studio section or repost but a lot is happening behind the screen, a lot of tears, sweat and a load of blood. But people tend to believe that we over hype, but it’s not over hyping because it’s really happening while some people where sleeping, I was on the road every single night.

So, tell us, is Rema in any relationship?

Yeah. I am not in any relationship, I really want to be but still looking for the right one. Life is really quiet and I want to enjoy the peace because when I walk out of the door, it’s really noisy, camera flashing lights, meetings, studio sections and other things. My home is actually my peace, basically, I find my own peace either in church or home. My own personal space, but yeah! It will be nice to find someone I can share it with, but then, I have not found the right one.

For now, I share with my mother and sister because you have to have a trustworthy person to share your deepest secrets with. This whole music stuff is beyond ordinary for me that’s why things are happening differently for me and I am very spiritual from my angle and I don’t do my things the same way as everybody.

You’ve been all about your mom and have not mentioned your dad, why is that?

I lost my dad when I was 8 years old. My dad was a politician and a publisher, but I don’t like to put that out, I prefer to stay low key. There were hard times and sad times, I want to give a big shout out to my dad for being a great inspiration and bringing my mom to Benin all the way from Imo state, everything was God’s plan and it’s working out for our good.

Been doing music since I was 7, but when I was 11, I took it seriously. Music has really been amazing, talk of the future the same way I came in unexpected is the same way I want to continue to operate.