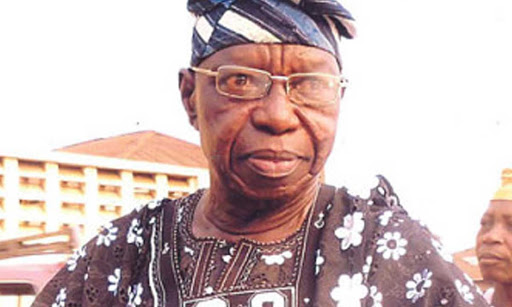 Veteran actor Lere Paimo popularly known as Eda Onile Ola is a known name till date in the movie industry. He’s one of the great actors who ruled our screens years back. Having been born on 19, September 1939 at Ogbomosho, a city in Oyo State southwestern Nigeria, he began acting in 1960 after he joined the Oyin Adejobi theatre group, a theatre group founded by Pa Oyinade Adejobi before he later joined Duro Ladipo’s Theatre Group where he featured in a stage play titled Obamoro with the role of “Chief Basa. He became popular following a lead role as Soun Ogunlola played in an epic Yoruba film titled Ogbori Elemosho which brought him into limelight. He had featured, produced and directed several Nigerian films since he began acting in 1963. Recall In 2005, in recognition of his immense contributions to the Nigerian film industry, he was bestowed with a National award of Member of the Federal Republic alongside Zeb Ejiro by Olusegun Obasanjo, the former president of the Federal Republic of Nigeria.

Pa Lere Paimo was at the 80th birthday ceremony of Madam Abiodun Duro-Ladipo in Ibadan and he spoke with City People Assistant Editor, SUNDAY ADIGUN on how he joined Duro-Ladipo in 1960, and how he was given his popular stage name, Eda Onile Ola. Below are the excerpts.

Tell us about why we are here today sir.

We are here to rejoice with our mother, Abiodun Moremi Ladipo, who is celebrating her 80th birthday today.

How best can you describe Mama Moremi?

I can describe her very well because, by the grace of God, we started together at our tender age. And I thank God that today she is now a mother to all. We thank God.

What is the relationship between you and the late Duro-Ladipo?

Late Duro-Ladipo was my master. Everything I am today, the name, the prestige is by God’s grace and his contribution, because I didn’t have any other confidant aside him. I served him and used all the gifts God gave me under him, and I thank God that we are remembering him for good today.

He gave me the name “Eda” when the duo of Ulli Beier and Susan Wengar, the Adunni Olorisa, brought a job to us. The script was entitled: “Every Man” and was written by someone in Wenger’s country. The script was written in English and our job was to translate it to Yoruba Language. By our translation, we referred to “Every Man” as “Eda”. The role of “Every Man” or “Eda” was played by me. He was a wealthy man and also hardworking and industrious. That role from the script gave me the sobriquet and since then, many people came to know me as “Eda”. It has become so popular that some people don’t even know my real names and many people know me only as “Eda Onile Ola”.

How did you join him?

In 1960, I learnt that they were shooting a movie at Mbari Nbayo, and I was also living in Oshogbo then. I first joined my boss, Oyin Adejobi, but later I left. I heard about Duro-Ladipo, I went to inform him of my interest in joining his theatre group. He accepted me after brief examination. He discovered that I can speak fluently and dance very well.

That was how I joined him since then and God has been helping us.

Would you say theatre practicing now was how you started then?

No, because the younger ones then respected elderly ones. What they were doing then were appropriate, they didn’t dress indecently, they didn’t bleach their skin and young boys don’t sag their trousers, they don’t use earings, and they don’t speak jagons on stage.

It is different from what we are seeing today.

What do you now think can be done to get it right?

It all depends on our viewers, because if we tell them and try to compare they would say that was our own generation. But if the outsider could tell them, then they can gradually adjust. I pray God shows all of us the way. That is my advice to them.

Sir, your evergreen movie till date is Ogbori Elemosho. How did you conceive the storyline?

There was a book written by Prof. N. D. Oyerinde, the first professor in Western region. “The story of Ogbomosho”. I bought the book and I got the story from the book. As an actor, I prosed it and converted it to movie. And it was accepted all over.

Is there anything you are working on presently?

Presently, I want to launch Eda Onile Ola Foundation, come March 2021 by the grace of God, and I believe that whatever we get from it, we would build a centre to teach our younger ones how to act. They would be the one holding forth when we join our ancestors.

Why do you plan to set up the foundation?

But you have made your name already, why are you so particular about setting up a foundation?

Yes, but if we can teach our children the nooks and crannies of this job, on how to write story, how to sing, how to dance and many other things they would understand it more and they would also spread the knowledge.

In doing that, our foot prints will remain on the sands of time, by the special grace of God.

What is your message and advice to all the theatre practitioners, as a veteran and their father in the industry?

What made the government to send our leader then to the commonwealth festival, and all of us were there was because they had gifts. And if we can inherit such a legacy from them and we are now telling our children, they should listen. Every actor/producer, filmmaker should make sure that their story is meaningful. They should not look at the monetary side of it. We didn’t even know that there is money in it. It was just a pure passion, thank God, God blessed us eventually, and we were able to achieve a lot through it. So I plead with them to do well, and they should have maximum respect for the elders.