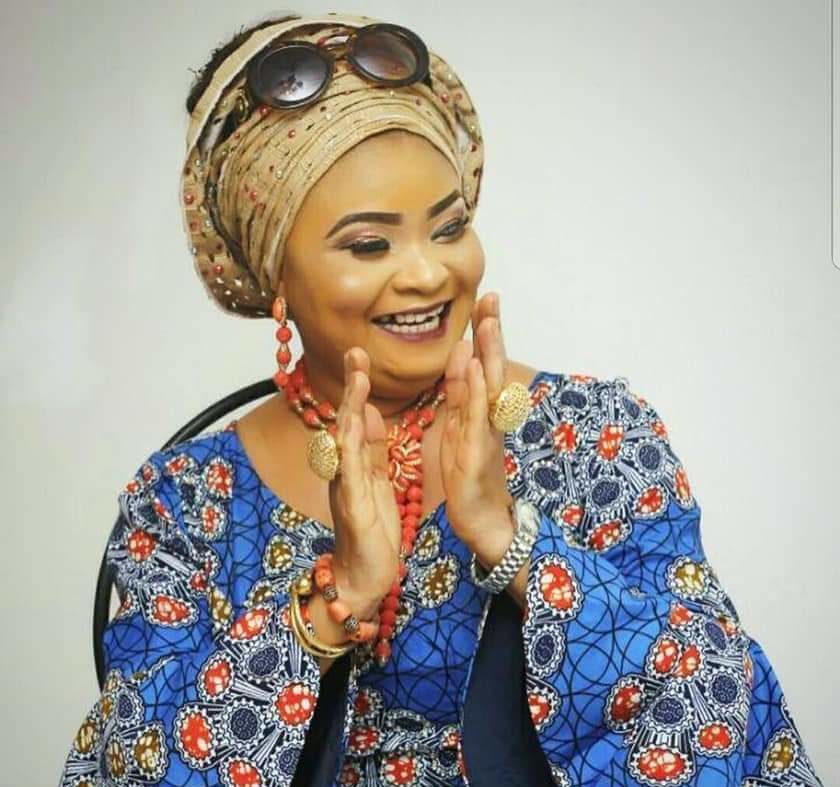 All roads led to Imperial Hall, along Jobifele Way, Alausa in Ikeja, Lagos, a few weeks back, when delectable event planner-cum-politician, Erelu Susan Gbemi Alabi celebrated her 50th birthday. The creme-la-creme of the society gathered to celebrate this fashionista. She changed into 3 different beautifully designed outfits for the day.

The well-planned event had a lot of celebrities in attendance, from society women to politicians and Nollywood stars. MC Mikey was the Compere of the classy birthday. Faith Band was on the bandstand, doing absolutely what they know how to do best.

There was so much to eat, from local to Intercontinental dishes. It didn’t stop there, Fespirs Lounge and Bar was incharge of drinks and exotic wine.

The birthday which lasted till about 10pm still had an after party, where guests were treated to another set of delicious food, drinks and cool music.

Erelu Susan Gbemi Alabi is a school owner, politician and Events Planner. She runs Willow Hall Schools. It has a Creche, Pre-School, and Primary School located at 227, Borno Way, by Adekunle B/Stop, Ebutte Metta, Lagos. She is the National Women Leader of the Buhari/Osinbajo Mandate Group. She is also doing well as an event planner. She is happily married to Architect Ayodele Alabi, and the union is blessed with children.

Erelu is friendly, down to earth and also a disciplinarian who does not play with her business. She is also a fashionista. She is blessed with a very good shape and a glowing skin, everything she wears fits her so perfectly.

For her 50th birthday celebration, Erelu changed into 3 different outfits. Guess what? She looked like a Queen in all the outfits. She was looking gorgeous as ever in Gold-and-Purple outfit, with Red accessories to compliment her looks, which happens to be her first outfit for the night.

Later on, she stepped out and changed into a wine coloured native, and she was ushered in, with her husband Architect Ayodele Alabi, who was also looking very handsome in a gold native outfit, and a red cap to match. They both danced into the hall, while Erelu’s friends joined to usher the celebrator in. They looked so perfect together.

The last outfit for the night was the chosen aso-ebi for the party. She was looking like a box full of dollars in a well-designed gown and gorgeous accessories. She looked hot and she displayed good dance steps as she danced to celebrate her special day.

THE VENUE WAS BEAUTIFULLY DECORATED

The hall was beautiful decorated in white-gold and a touch of red. Everything was to the point.

Man of God.Venerable Feyi Ojelabi opened the event with an opening prayer, before every other thing followed. He stepped into the hall in company of his beautiful wife and kids.

Stand up comedian, Mide Coker was the MC of the event. There was no dull moments with him around, as he dished out rib-cracking jokes to keep the event lively and also mad guests.

Faith Band was on bandstand. They played a lot of beautiful tunes to thrill guests.  It was a colourful and classy event with Faith Band around.

Erelu maintains a very cordial relationship with a good number of Nollywood stars and such a person couldn’t celebrate her golden jubilee, without the presence of veteran actress and close friends.

Delectable actress, Iyabo Ojo, who is always looking 10 years younger was also present. Ademola Adisa, a Nollywood actor, was also present at the birthday celebration. They were all beautifully dressed. They were the cynosure of all eyes at the party.

Erelu Susan Gbemi Alabi’s parents were both present at their daughter’s 50th birthday celebration. They both sat at the head table and also joined her in cutting her birthday cake.

THE CAKE STANDS OUT

The birthday cake was beautifully designed by Exotic Cakes. It looked like one of Erelu Susan’s statue in one of her beautiful outfit and accessories. Lots of people could not help but admire the beautiful cake, and it was a special gift from the veteran actress, Jaiye Kuti who happens to be her very close friend.

Joseph Uwana Jackson popularly known as DJ Jackson was the DJ for the event, playing selected tunes to the listening pleasure of the guests.

Fespris Mobile Bar was in-charge of drinks. Fespris is owned by delectable actress Iyabo Ojo. They have a well-trained staff, who deliver their services any time. They were beautifully dressed in a crested Black T-shirt and a jean.

They took proper care of all the guests and made sure, they were all well served wiithout any form of complain. They served from Henessy to champaign, red and white beer, beer, juice soft drinks and water.

Ooni of Ife Adeyeye Ogunwusi was represented by the pretty Yeye Morounranti Ashabi, the Asoju Asa Ile-Oodua. She was gorgeously dressed in white, gold and red, looking radiant. She came in early for the birthday party and left in between the party.

The classy birthday party was well attended by her close friends. She has a close-knit set of friends, all of whom came for the birthday. Hon. Tosin Ajisafe was there. She is the former Ado-Ekiti LG Chairman. She turned 50 a few weeks back.

Yeye Bola Aderoju was there. She owns the Best Option Petrol Station with branches all over Nigeria. She is the owner of Goshen Nursery & Primary School in Ibadan. She is the Yeye Amurewolu of Ado-Ekiti. She is from Ado Ekiti.

Veteran Wale Okunniyi, a politician, was there. Real Estate guru, Muyiwa Akingbolade was there. Deji Ayeni, one of the Ayeni Brothers was there. He owns Grand Motors. He is the son of popular Ilesha businessman, Baba 1010. We also spotted Bushirat Odunewu, a top-shot in one of the banks, Kemi Ofili, a Lagos businesswoman, Kola Peregrino (a top aide to Asiwaju Bola Tinubu) also came.

Others include Remi Talabi, alias Ashabi Ade. She works in NNPC. Bimbo of Brown Sugar also played a key role Yeye Bola Aderoju handled Aso-Ebi which came in gold colour. Bola Oloyede was also there. She used to be a Commissioner in Ekiti, Aare Rotimi Ishola took care of drinks. There was also Deji Popoola, the MD of Fina Trust Finance House. There was also Taiwo Ayodele. She is into Diesel. Sumbo Adebesin was also at the party. She is a big businesswoman. She travels a lot to China and Vietnam to bring in Hair & Cosmetics products. Mr Seun & Mrs Funke Akande attended. Ogun politician Hon. Kayode Amusan was at the party.

Niyi Olasoji who used to be Chairman of Computer Village Association came with his friends. Dr Jide Olawepo was seen at the party. The Ooni of Ife sent his staff of office. Omoba Leke Adeyemi came, so also  Gbenga Sule alias Millionaire MC was Mide Coker. Her sister in Law, Yinka Alabi came. She is a Chartered Accountant. There was also Mr Adenike Saddique in the house, so also Kehinde Musa a.k.a K. Glow.

Popular actress, Jaiye Kuti was there all day. She arrived early in the morning and left at midnight. Many don’t know she is a very devoted friend. Another actress who played a key role at the party was Iyabo Ojo. Her company Fespris did a good job. She and her team took charge.

Erelu Gbemi herself supplied Ushers. She has a company called Sutton Royale, one lady whose image loomed large at the party was Funke Akindele-Awe, the lovely lady behind Event Lover Nig. Plc. She has been into events for the past 5 years. She is into Event Planning & Management. She handles everything events. She provides event solutions. She has worked with the likes of Zappire and Eventful owned by Yewande Zacheus. She coordinated the event.

How Erelu GBEMI ALABI Celebrated Her 50th Birthday was last modified: May 6th, 2019 by Biodun Alao

How We Transformed ERINMO Town In The Last 5 Years – HRM Elerinmo Of Erinmo, Oba MICHEAL AJAYI