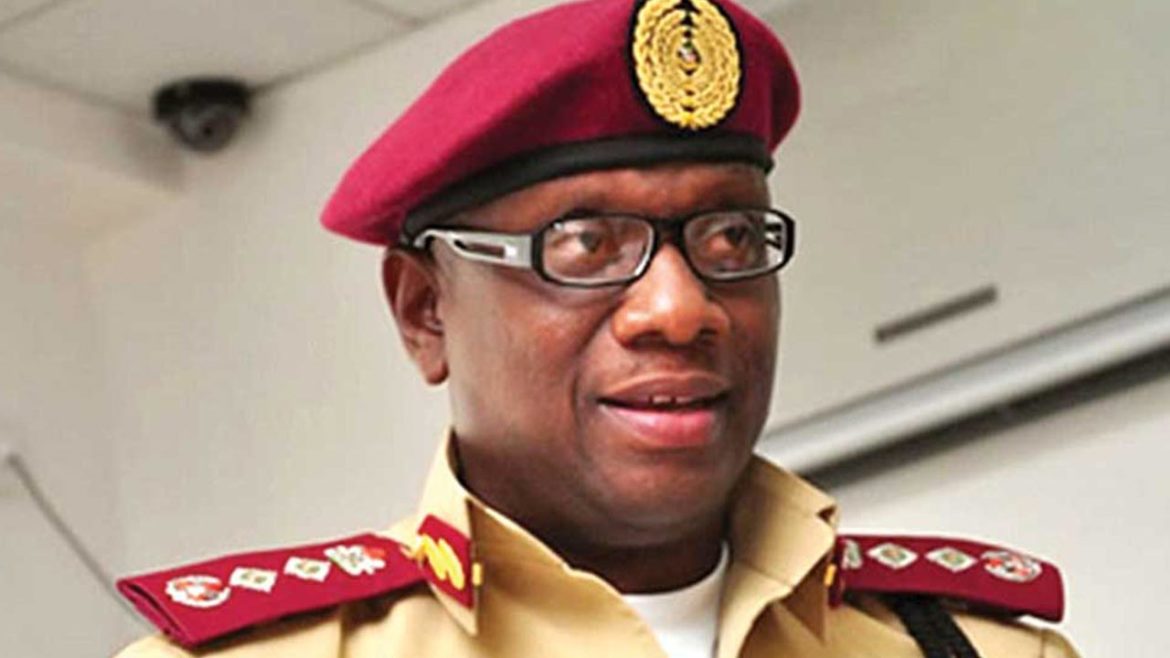 The Corp Marshal of the Federal Road Safety Corps (FRSC), Dr. Boboye Oyeyemi has revealed that the Agency invested in human capacity development, technology and process within the past six years.

Boboye, who is one of the surviving founding fathers of the Agency, noted that no desired result and productivity would be achieved without investing in human capacity.

The Corp Marshal made this known in a recently held interview.

He lauded the Chief of Defence Staff, General Abayomi Gabriel Olonisakin
for making available training facilities for the staff of the Agency across all levels.

Meanwhile, Boboye stated the Agency’s readiness to establish its own Command and Staff College which is temporarily located in Udi, while expressing optimism that its permanent site would be in Oyo state in appreciation to the state for being the first inhabitant of the Agency.

“Fortunately, over the past six years, as the Corp Marshal, we have invested more in human capacity development just like the process, people and technology.

“If you have the people and you don’t invest in human development, you cannot get result. It is like giving a rifle to someone to use. He would kill himself because he does not know whether the nozzle is to be pointed at the side or not. He does not know how to handle it.

“So, you have people, technology and process. The first thing we did was to plead for the understanding of the Chief of Defence Staff for us to have slots at the Command and Staff College, Jaji for junior and senior courses and then National Defence College.

“And I must thank the Chief of Defence Staff, General Olorunsakin for giving us slots every year. We also have been having our slots at the National Institute for our senior officers.

“Then, for our middle-level Officers, they have been going to Army War College and also the ASCON (Administrative Staff College of Nigeria).

“And last year, we decided to take the bull by the horn to establish our own Command and Staff College which is temporarily located at Udi where we have our Academy and hopefully it is going to be sited at Ibadan where the Road Safety originally started from.

“We are in discussion with the Oyo state government on this so that we can have something to show appreciation to the state for being the first place the agency started from.

“If you look at our inspectorate school too, it is in the South South. It is in Agbode and we ensure that the federal character principles is also observed. Our training school is in Jos in Shendam local government. Then, the Academy is at Udi in Enugu State. The Inspectorate School is in Delta State. So, you can see the spread like that. So, with this, I think we have done well in my capacity” He said.

Speaking on the Agency’s technological revolutionary agenda, Dr. Oyeyemi said a platform with the agency called E-booking as the ability to verify vehicle details due to its connection with the offenders’ register, driver’s licence data and vehicle registration database.

He further explained that the technological platform is not only for offenders but also First Information Report (FIR).

“Your vehicle details are verified because the e-booking is linked to the offenders register, driver’s licence data, vehicle registration database.

“So, that is the beauty of the e-booking. The e-booking is not only for offenders. There is what we call the First Information Report (FIR). In that report, the details and the photograph of the incident goes straight into the database.

“So, if your driver’s licence is not genuine, it would reject it. If your vehicle registration is not complete, it would tell you that the number plate does not belong to that vehicle.

“If you have been arrested before, it would flag that you have already accumulated some points.

“It is preserved for the crash investigators. That is the beauty than using the manual booking sheet. That is the same tool globally in developed and advanced countries. You will not see anybody with longhand” He said.