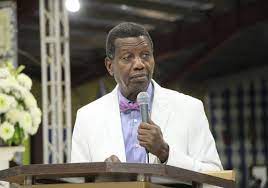 The Founder of Love of Christ Generation Church C&S (Worldwide), the Christian assembly, Rev. Esther Abimbola Ajayi opened a news cathedral in the heart of Lekki Lagos and the event was well attended by the who-is-who is the Nigerian social, political and religious space.

Among those who grace the event was the General Overseer of the Redeemed Christian Church of God, RCCG, Pastor E. A Adeboye. Pastor Adeboye was invited specially to give the first sermon in the church and to officially open the edifice for service.

He attended the event with his wife Foluke Adeboye.

Speaking at the event, Pastor Adeboye, in his message highlights how God instructed him to come to Rev Esther Ajay’s new church to declare the church open.

“Somebody asked me yesterday and said “we found out in the media that you are going to preach at such and such a place. I said yes. He said we didn’t believe it. And I said you better believe. Then he asked why. And I aid God asked me to go. And when God asked to go like that, it could be because just one fellow who is being given a last chance, to surrender his or her life to him.