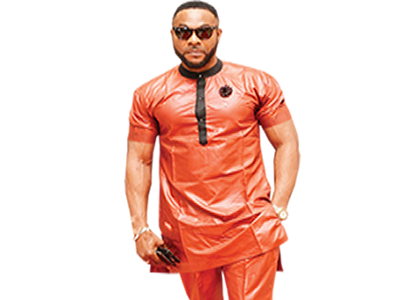 Bolanle Ninalowo is one of the hottest actors, rocking both the English and the Yoruba movie industry. Within a short period, he has become a producer’s delight and a household name.

The talented actor joined the movie industry in 2010, after his 15 years sojourn in America, where he had his first degree in Accounting and Marketing at Keller graduate school of management both in America. He then tried his hands in movie production. He produced the movie titled “ Rebirth” but the movie never saw the light of the day. He equally floated a record label called “Diesel” he equally failed and lost everything.

Being a very hardworking and determined person, he didn’t relent, his cousin Rukky Sanda gave him a role in her movie, and since then, Bolanle has been shuttling from one location to another.

His brilliant performance in the movie “Picture Perfect” became a game changer for this industrious actor, as it increased his rating in the Yoruba movie industry as well. In this roundtable interview with City People, this Lagos born actor talked about his journey into the movie industry, challenges and future plans. Below are the excerpts.

How do you cope with attraction from opposite sex considering your looks?

Honestly, I appreciate my fans, male and female, before fame or Nollywood I have always been attracted to lots of women. In my past life, I have realize a lot of my down fall. In what can make me, there are 3 barriers to success, women and arrogance, so for me. I don’t see all that women stuff, there are certain things to be avoided in life.

For how long were you married?

I was never married really.

Because of formality, that was why I used the word marriage. The mother of my kids, is the woman I met here in Nigeria, and I took her to America to file for her, to get her stay, and that involve me taking her to the court house, and doing the marriage that was not marriage proper, that we all know about. We both had 2 kids together, and I was like, let me pursue my goals, by the time, am 40 or there about, then we can have the wedding proper.

So are you still together?

No, we separated 5 years ago. Things happened.

What is the craziest thing a female fan has ever done to you?

They have done a lot of crazy things o. Sometimes, I can’t even remember them anymore.

Have you been kissed forcefully by a fan before?

Yes, that happened to me in South Africa, when I got out of the elevator, a lady just jumped on me and started kissing.

Yes, that is normal, I get naked pictures, on my phone everyday.  It’s just one of those crazy moment.

So how do you cope with all these?

I don’t regard it. Honestly it doesn’t exist in my mind set the FAME part of my life does not exist, am not confused about who I am, or what am doing in life. My work is my work. Like I left for America on the 14th, got there 15th, short, on the 16th, left on the 17th and got back to Nigeria on the 18th, I could have stayed back in America for a week or two to enjoy myself, but truly, I don’t have time for such. Where I am right now, took everything away from my life.

Are you presently in any relationship?

No, am in love with my job and my kids.

How I Cope With My Female Fans – Star Actor, BOLANLE NINALOWO was last modified: November 3rd, 2018 by Reporter