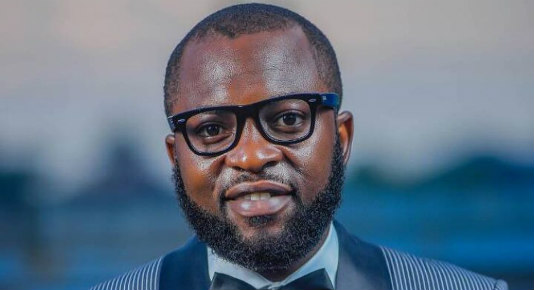 Do you know that the Nigerian team at the Russia 2018 World Cup fiesta was adjudged the best-dressed team by the British Broadcasting Corporation (BBC) and the world-leading magazine, Vogue Magazine? Do you also know the attire stirred furore on social media and traditional media, as the outfits attracted bout of accolades for the Nigerian team. The Eagles potted white ‘buba and Sokoto’.  The white outfit was designed with green neck embroidery did not only catch much attention but has also put the designer in the limelight.

Esimaje Vincent Awani, the CEO of GT-Stitches, is the brain behind the outfits of Nigerian team to the world cup fiesta.  Last week, City People’s ISAAC ABIMBADE, sat with Awani at Oriental Hotel for hours, where he revealed how he came about the design and what led him to fashion designing. Enjoy the piece.

You are the fashion designer who made the outfits that Super Eagles spotted to the Russia 2018 World Cup. Tell us more about it.

Yes, It was an inspiration born out of love and patriotism for Nigeria. Immediately after the last qualifying match in Nigeria, I thought of it and I’m like okay, football game is the only unifying factor that can bring this country together irrespective of  political,  or religious differences. So, it’s a unifying  mechanism that can bring the entire Nation together.

As a fashion designer, I thought about that, that  how I could  contribute my  quota by supporting the project of the Super Eagles going to Russia 2018, and the only way I thought I could support the Super Eagles was  to come out with something within the fashion industry, and that was how we came up with the design. Immediately after we got the design, we submitted it to the Nigerian Football Federation (NFF). After proper scrutiny and all that, they approved it, but before it was approved, there was an open bid which gave other people an opportunity to bid too, but at the end of the day, because it’s our brainchild; we were the one that actually conceived the idea and at the end of the day, our design turned out to be the best and we won the bid.

That was how it was contracted to us for production. But in all, what we were actually looking at was how to serve our country. We thought it was high time we start patronising made in Nigeria goods and if the Eagles  were  going to Russia, it would  be better for them to be wearing made in Nigeria clothes.

By doing that, we were putting money back into our system. You will agree with me that, one of the biggest epidemics that is eating up the system today is the issue of unemployment and at GT-Stitches One of our major goals is to create jobs because the unemployment rate in Nigeria today is alarming and people are flooding the labour market. There’s no job anywhere. So, we want a situation whereby we can also stand telling Nigerian youths that instead of looking for job, you can create jobs in your own little way.

Tell us about the brand, GT-Stitches?

GT-Stitches is a new brand. We are about 2-3 years in the market. What we try to do is to give a more contemporary approach to fashion. We keep our brand as simple as possible because people don’t like things that are too busy. We try as much as possible to create something that can enhance self confidence on our clients, so that we can also compete with other international brands.

Is this your first time of designing for a big brand like Super Eagles?

Yes, I think Super Eagles design is our major breakthrough but we have been doing skeletal jobs for celebrities here and there. The like of Ushbebe and other big names in Warri because we are not in Lagos; we are in Warri, but the Super Eagles ceremonial outfits is our major big break.

What is the feedback you have got since this outfit was released and worn by Super Eagles?

The Feedback is quite impressive and overwhelming. Now, I’m beginning to see myself as one of the super stars within the fashion industry. I know as a professional who has been in the business for sometimes, I know it’s easy to attain this level in business but it’s not easy to sustain it. Regardless of how I’m feeling, I’m going to try as much as possible to stay within the confine of the principle that will enable me sustain this fame that has come to this brand.

Immediately you won the bid to design for the Super Eagles, how did you get the players measurement?

That was the toughest part of the entire project. Immediately it was approved that we should go ahead with the production of outfits, bringing the players together became another big burden. These players were scattered all over the world. It wasn’t easy for us to go to China to meet Mikel, Ighalo and go England to meet with others, and other players around  Europe.

So, we had to wait for them to come to camp in Nigeria and it was when they were in camp in Uyo that we went there and took the measurements. It was a difficult one because from the day we took the measurements to the day they wore the outfits were only 17 to 18 days. So, we worked under intense pressure to achieve the production of those clothes, but as a fashion designer, one of the things you must train with and master in this business is to try as much as possible to deliver within a very short period of time.

Can you tell us more about yourself and where you are from and how did all start for you?

I think it all started from Canada. I schooled in Canada. I graduated from College as a Paralegal and I’m a registered member of the Canadian Law society. While I was in school,  I usually go to all these designers, who get clothes for big department stores; clothes that are off shelf. We go to buy from them and I distribute. In doing that, I was really acquainted with the fashion business. So, when I came back to Nigeria, I was for sometimes into politics before I decided to go into this business (Fashion business). Although, my mom was actually a seamstress, but  it was my passion for fashion that landed me in fashion business.

How long have you been in the business?

Have been in business for over 2 years. But because I have some great artistic sensibility,  that has given me  a jump over those I met in the industry.

There’s a whole lot of production or value chain within the fashion business. When you talk about fashion business to a lay man, all he thinks about is put cloth on a sewing machine and sew. No, it’s not like that. It ranges from you having enough artistic sensibility on sketching things, having a prototype of a particular design, to production of sewing, to packaging. There is a whole lot of production chain within the fashion industry. Those big fashion designers don’t even mount the machine to sew. But as a fashion designer, you can’t stay away from sketches; you must know how to sketch.

Some fashion designers who are just starting, they do sketches and sell to the already established brands.

Tell us more about you?

What is your plan for future?

My plan for the future is to continue to build up our brand and hopefully we are going to be competing with international brands. But for this major thing that we have had, we are hoping that in the next 4 years Nigeria Jersey will be produced here in Nigeria because we know the amount of money that has gone out on production of jerseys. So, from now till the next 4 years, we are going to build capacity in this industry to show that, yes we can handle such a huge responsibility.

How I Grew Up With BIODUN ONANUGA In IJEBU-ODE – BAYO ONANUGA, NAN M.D