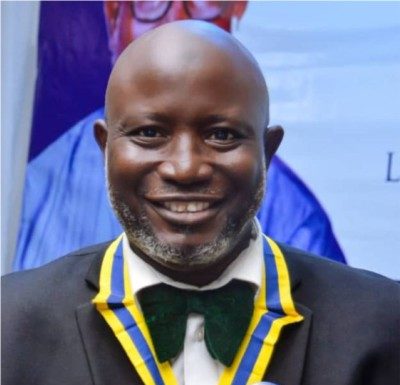 Lion Abdulkarim Yusuf is a reputable Lagos Civil Servant and philanthropist par excellence. He is the 34th President of the prestigious Ikoyi Lions Club, District 404A1 Nigeria, a position he attained on July 1st 2021. Lion Abdulkarim Yusuf has a quite intimidating academic and enviable work experience profile. He holds a Masters Degree in Economics from the University of Lagos. He had earlier obtained his first degree in Economics at the Bayero University, Kano.

As a seasoned Tax Administrator with over 25 years of Experience, Lion Yusuf is a Fellow of the Chartered Institute of Taxation of Nigeria, member of the Institute of Debt Recovery Practitioners of Nigeria, among other notable professional bodies. He is endowed with an unyielding desire to achieve a high standard of work in everything that he does. His level of confidence, assertiveness and organization is unrivalled. This has earned him a reputation as an excellent team leader and player. In fact, he is a role model to many young people.

His passion for humanitarian service led him into an internationally recognized society where he pitched his tent with the Ikoyi Lions Club. His advent at the Ikoyi Lions Club is a blessing as his membership has availed him the opportunity to serve the less privileged in a wider spectrum within the five focus areas of hunger, childhood cancer, vision, diabetes and environment.

As you are in the mood for celebration, how did you feel with the calibre of people who are here to celebrate with you as the President of Ikoyi Lions Club?

Thank you first of all for having me. It’s been wonderful and a great experience for me.

With the calibre of people you have here today, how do you feel?

It’s an honour and I’m really humbled that they responded to my invitation like this. It’s one thing to invite people, they can create excuses not to come but I’m delighted that I’m humbled and honoured that they all turned up in this manner.

How did you emerge as the club’s president?

The process of emerging as the president of Lagos Ikoyi Lions Club was through the election. First, you will contest into the office of the Second Vice President, and if members find you suitable, the following year they elect you into the office of the First Vice President. Then if you become the First Vice President, of course, you would need the necessary votes to be the President of the club. So, the process of the election says you must garner at least two-thirds of the votes of members to be able to continue in office.

What are your goals and aspirations for the Ikoyi Lions Club?

We will continue with the humanitarian service that we provide on a monthly basis in the areas of feeding the hungry, pediatric cancer, vision, environment and diabetics. Having said that, the core project is in recognition of the chapter president of Lagos Ikoyi Lions Club which is the Oye Williams Garden that we intend to redesign and put in some structures there to make it more comfortable and inviting to people. Because that garden has served the community well, the contributors to the redesigning today will have their names engraved on the wall of fame that we want to put in the garden. Having said that, there’s a whole lot of other things that we are planning; which is in terms of membership, we intend to bring quality members into this club so that it can continue to hold its pride of place in the District 404A1, Nigeria being the biggest club in the district. And bringing in membership, we intend to make it more quality members because they will have to go through some screening and of course leadership training is important to us. We have done one; which is called the CQI (Club Quality Initiative). It’s all about training people to understand, giving them the opportunity to be able to do an assessment themselves; where their strengths are and where their weaknesses are and how they can help the club to achieve the greater goal.

Why did you make the renovation of Oye Williams Garden your core project?

I’m passionate about the environment. The garden actually was commissioned about four years ago during the tenure of the current zone 1 chairperson in the name of Lion TPL Soledotun Abdulkarim-Yusuf and it was in memory of another wonderful great woman, Lion Oye Williams; that is the wife to Akintola Williams who started the club. She chartered the club. My passion for the environment is so strong that I think by doing that we are contributing in a way to make life easy, breathing wonderful fresh air and having a quality of life.

What is your most remarkable moment as a Lion?

The most remarkable moment would definitely be today being installed as 34th president because that is history for you. Anytime the history of this club would be written, definitely, this will take a page on that history.

What kind of leadership should members of the Ikoyi Lions Club expect from you and your team?

Nothing other than quality leadership, warm relationship with everyone, an opportunity for everyone to do something for the needy, opportunity to play some kind of leadership forum in the club and that’s what I intend to do. Just make everyone feel comfortable and happy that they are in the club as far as my tenure is concerned.