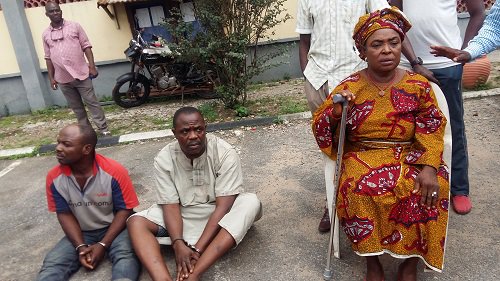 A 60-year-old woman, Gladys Osaigbovo-Omon on Monday narrated how assassins sent by her United Kingdom based younger sister to kill her changed their minds after she served them food and treated them well.

It was gathered that the alleged assassins were contracted by the victim’s cousin, Osaro, who Augusta Osaigbovo had asked to eliminate her sister for N4.5million.

Unable to do it, he contacted a friend of his, Lucky Oboh, who in turn got two men and brought them to Osaro, who gave them details of the victim’s address in Benin City and other useful information.

According to the victim, trouble started with her younger sister last year after the latter took her daughter, Mercy to the UK.
Unknown to them, Augusta wanted Mercy to become a prostitute in that country and be paying her returns, an idea the young woman rejected.

She said: “I trained my younger sister. I took care of her. She is the only one that went to school in our family. I got married early and I took my sister to leave with me.

“I showered her with love and care. She was with me until she moved to Europe. No, I was not the one who sent her there but I always prayed for her.

“So, sometime ago, she came and said she wanted to take my daughter to Europe with her. She said that’s one way she could appreciate me for all the things I did for her. I agreed and I was happy that my sister was helping the family by taking my child to Europe.

“I do not know what happened between them in Europe but it turned out she wanted my daughter to become a prostitute and Mercy refused. They started having issues and she said Mercy should pay her the money she used to sponsor her abroad.

“I think my daughter was giving her money every month from the hairdressing work she was doing. But for some months, Mercy could not give her money because she sent money home for my treatment.

“She said she did not know if they were real or fake since she was new in the country. So, the police arrested my sister and she said my daughter gave her away. She said she would deal with her and that is it her corpse that will return home.

“I rebuked her and told her I expected them to live in peace since it is family matter but my sister was still not happy. I did not know that she could go as far as sending people to kill me.

“She contacted my cousin, Osaro to kill me for M4.5m. Osaro came to my house with another man, Igbinedion to greet me on July 17 but I did not know that they had come to identify my place so that his accomplice can come back and kill me.

“Some days later, Igbinedion and another man came. I prepared food for them and served them. When they finished eating, I now heard them talking to themselves that I was a good woman and that they cannot kill me. They disclosed everything to me and said it was Osaro who contracted them that my sister wanted me dead.”

Parading the suspects, Police Commissioner Imohimi Edgal disclosed that the two men contacted to kill the victim were police informants, adding that they leaked the information to the Divisional Police Officer (DPO) Igando, Taiwo Kasumu,

Edgal said they were arrested on July 26, describing the incident as a case of human trafficking gone awry.

He commended Mercy for refusing to be forced into prostitution, urging parents to be careful those they release their children to.

Edgal said: “When the DPO Igando, CSP Taiwo Kasumu, got a whiff of the plans to kill Gladys, he planted two agents provocateurs namely, Igbinedion Ogbevon and Success Ehiosun to play along with the hired assassins.

The gang assembled and were paid the sum of N500,000 by Augusta Osaigbovo as a mobilization for the job. The names of the assassins are
Osaro Okonobom and Lucky Oboh.

“Together, they went to Benin-City in Edo State and identified their target, Gladys Osaigbovo, after which they returned to Lagos and requested Augusta to give them the balance of N4,000,000. It was at this stage that they were rounded up.

“Efforts have commenced for the extradition of the principal suspect, Augusta to Nigeria to answer for the crime of attempted assassination.

We are working with the Interpol on this matter and will ensure justice was served.”

Osaro told reporters that he was being disturbed by Augusta to kill Gladys, adding that he succumbed because the former promised to do something good for him.

He said he was also lured by the N3 million he would have gotten if the deal was concluded since the assassins would have collected N1.5m.

He said: “When I told Lucky about it, he said he could not do it after which I contacted one Igbinedion who agreed to kill my aunt for N1.5m.

We planned to give him N1.5m from the N4.5m we were to collect from my sister so that we can share the remaining N3m.”

Movie directors can no longer afford me – Omotola Jalade Ekehinde