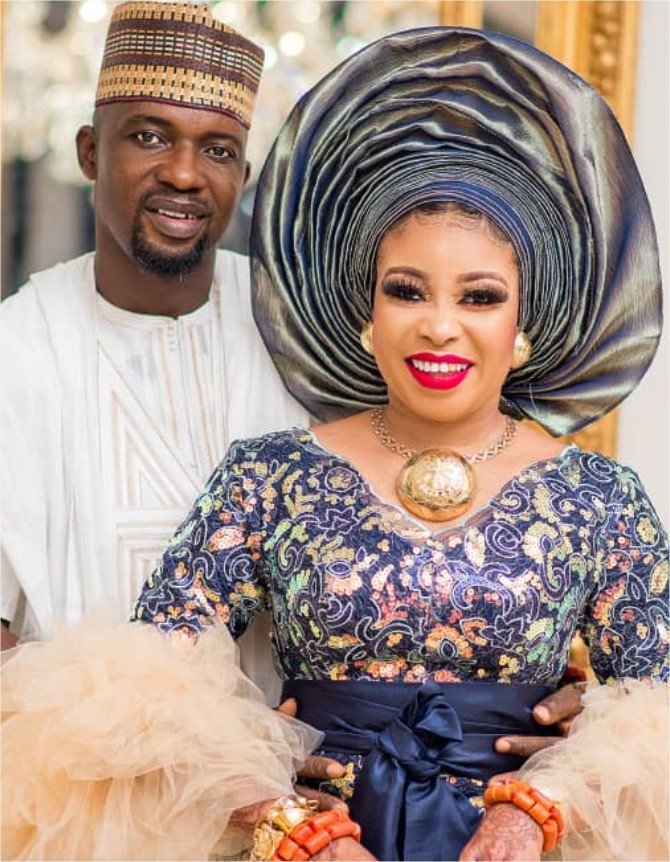 Since Gold & Diamond Merchant, Liz Anjorin got married a few days back, City People has been trying to interview her husband, Alhaji Abdullateef Lawal, the rich Lagos businessman. His initial reaction was that he is not a celebrity so he should be left out of all the razzmatazz and paparazzi that followed their 3-in-1 wedding. They had the Registry, Engagement & Nikkai the same day at a venue in Lekki, Lagos…

“Liz is the celebrity, talk to her”, was his initial response.

But when he was reminded that his status has changed to that of a celebrity simply by marrying Liz Anjorin, the star actress/movie producer turned Jewellery merchant, he accepted and he spoke to City People Publisher, SEYE KEHINDE about their love story and marriage. Below are excerpts of his interview.

Congratulations on your wedding to Liz Anjorin. Why did you decide to marry her now having dated her for over 14 years?

How do you see all the controversy that came after your marriage to her?

There has been no controversy. All those things they wrote are not true. As a Muslim, I am allowed to marry up to 4 wives if I want, but I am not even married to 4 wives, not to talk of 5 wives and 8 children. All that was published was published out of envy.

What made you renew your request for her to marry you when you did early this year?

Because I really wanted to marry her. I have been ready to marry her for years. I have asked her to marry me about 3 times, but she said she needed time to achieve her goals and I allowed her. I knew I would marry her eventually. And I finally did.

How do you see all the reaction to your marriage?

I think it was because of my wife. She is a celebrity. By virtue of getting married to her now I have become a celebrity. Now, I can’t live my normal life again. I can’t go everywhere like before. Now, I go around with security to protect me. I don’t know how you sleep and wake up and become a star, a celebrity just like that.

What 1st attracted you to her?

Her beauty. Her physique. She is a nice girl. Lizzy is a nice girl. She is also very ambitious. Close to 14 years ago, since I got to meet her, she has been telling me she wants to achieve a lot in life. She told me she wanted to be a successful actress and movie producer and she achieved all that. I have been with her, all the way. In the background.

I have always supported her moves. It was love at first sight between us. Immediately I set my sight on her the 1st time, I knew I was going to marry her. I don’t know how to toast a woman. What I usually do is to send people to whoever I like. So I sent people to her. We became friends. We get along. We became friends first before we began to date.

I like to help people. I give generously to people both male and female. I love to always help people.

Liz is a nice girl. She has been nice to me all the way. She is very, very ambitious. At the time I first met her, she was dating a guy and so she told me, she couldn’t date me. So, I didn’t argue with her. I let her be. But we continued being friends. When she broke up with her boyfriend, I again asked her out. She said no, she was still too small. I met her mum before she passed on. I was close to her mum.

Her mum wanted me to marry her. She kept telling me to marry her daughter, Liz. She even suggested that I should get her pregnant and marry her, but I didn’t want to rush Liz. I wanted her to take her time.

We have always been very close, she will always call me to ask how I am doing. She knows I was living alone. She knew I have been lonely for years. So when I asked her recently to marry me, she agreed. She accepted.

Now, she is my wife. Before now I used to go out all alone. But I can’t do that again. I have had to adjust my movement.

So how are you taking all the controversies trailing your marriage?