How I Fell In Love With My Wife, ONARI Ex-CROSS RIVER Gov. DONALD DUKE 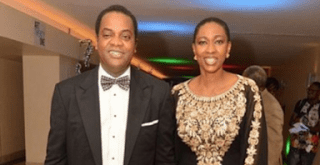 Talks About His Fashion Style

Let’s talk about your Style, sir. You are one person everyone looks forward to seeing on the red carpet because you’re always a delight to watch. Were you born with this or you picked it up from someone, how did this part of you evolve?

I was molded greatly by my father. He was a stickler for just doing the right thing, even in his dress code. I remember the day my father taught me how to knot a tie and how to knot a bow tie. We don’t pass those sort of knowledge to our people today. I remember going with him on a tour once, he was head of Customs for about nine years. We went to, I think it was somewhere in today’s Kwara State. We were in this rest house and he thought me the different cutleries for different meals, like the fish knife, the meat knife, the steak knife, the different forks for dessert and at the end of the meal, how to put your fork and knife together and all of those things. I think he was by far my number one role model and he was my best friend. We were friends. We had mutual respect for each other. He admired me a lot I must say and I had tremendous respect for him. My father died thirty-two years ago, but every day we talk about him as if it was just yesterday.

Did he also teach you how to carry yourself without airs?

Yes, he taught me about humility. He taught me that you’re just nothing but a small speck in this whole creation. Play your role, play it humbly and move on. He was a very well-grounded man, but very friendly. He was a father friend. My siblings and I loved him a great deal. He’ll come to our bedroom, lie on our bed and we’ll talk about a lot of things. There was nothing I couldn’t tell my father. Nothing. He liked my wife very much when he met her. One day he looked at me and said, if you’re not going to marry this girl, let her go. He was that sort of person.

Honestly, if my children have done well, it’s my wife. I was thirty-seven when I became a governor, so I was rather young. So I wasn’t there. But she played an incredible role in bringing them up. We have three daughters, two are married and have children, there’s only one at home. They’re all so very grounded, I don’t hear any scandals, I know what they’re doing, I know who they’re going out with, I know their friends. And thanks to her, she’s a great mother and they love her for it.

I don’t know if you’re aware of this, but you’re one of Nigeria’s most admired men. Not just because you’re accomplished but because you have an amazing woman beside you, to complement you. Every young man looks at you and says I would love to be like them…

I’m humbled. I’m truly humbled by that. I remember one of the things my father told me. When I was in the university I was in the students union and he always felt I would go into politics. He said, Donald, I’m going to bequeath my name, Duke, to you without stain, I hope you’ll do the same for your children. And I pondered over that statement. When it comes to public office in Nigeria, one has to be very careful. Colleagues of mine, friends of mine have been jailed. Whether they’re actually guilty or not, I don’t know. But I thank the almighty that I’ve been well guided. Anything could’ve gone wrong though, but I didn’t see public office as an opportunity to enrich myself. But I must say that I realized that it opens doors for you and that’s what I want. Donald Duke can open any door in Nigeria. If you take money, it will go, but the doors you can open are always there and that’s what I’m living on. I can go to a state today now and say listen, I hear you’re giving out this job, can I do it? More often than not, I will get it. That, to me, is more important. You know, when we were leaving office, Nuhu Ribadu himself said I was the only governor not under investigation. I’ll tell you a story. Recently, I hosted Prince Michael of Kent, he is the Queen’s first cousin and he came to stay in my place in Calabar for four days. I’d met him in London and we developed a relationship. He is about seventy-five years old. Before coming to Calabar, he had to take permission from the Queen before coming to Nigeria and of course, the MI 5 investigated me thoroughly because if I was involved in anything shady, you can imagine they’ll say member of the Royal family is hobnobbing with a fraudulent person and all that. It was until they were done with the investigation almost 6 months after we gave him the invitation that they said, yes, he could come. Today, I may not have billions in my bank account but I’m happy with myself.

You are one of the very few governors that have not been hounded by the EFCC. You’ve not had to go through the harrowing experience of been thrown in and out of jail after leaving office, how do you feel about this?

I don’t want to sound haughty about it, I’m just grateful to God that I have a family that mellows me. My wife would call me to order if she thinks that I’m becoming excessive about anything. I remember once I spoke very harshly to one of my staff, she called me and said I had to go and apologize to that staff. I said I don’t owe him any apology, he misbehaved. She said no, he didn’t do anything particularly wrong but you have destroyed his self confidence. I said okay, I will apologize tomorrow. She said, no, it’s not right for him to go to sleep in that state. She forced me at about 10.30 pm to go to his home and apologize. You need people who can call you to order around you. This is important because when you get into office, there is that tendency for people to pump you up and tell you, you’re amazing, you’re a deity, after God it’s you and all that nonsense. You need people to remind you that you’re just a fortunate person. You’re not the most brilliant, you’re not the wisest, but you just had the full opportunity to steer the ship, so get it right.

Final question, sir, what attracted you to this amazing woman sitting right here first time you saw her?

(Laughs) I was campaigning in Zaria, ABU, that’s where I had my University education. I was running for office as Social Secretary in 1980. While I was at the car park with a friend of mine, she walked past. She was trying to get some registration done. And I said to my friend, that’s my next campaign. I still remember what she wore. We became friends. I asked her to go out with me and she said I wasn’t serious. That hurt me, I had a chip on my shoulder then. How can I chase you and you’ll not agree? So, we became very good friends. We got married in 1986. So, we’ve been married for 34 years. Our marriage will be 34 years in May this year. When I tell people I’ve been married for 34 years they find it hard to believe.

What stood her out? I do not need anyone to tell me about your life on campus and how you must’ve been the cynosure of all the female eyes….

(Laughs) I had a good time, let’s just put it that way. What stood her out? Her composure. Her humility. And of course, she was very, very pretty. She was also very simple. No airs, what you see is what you get. You know, girls like to create airs, but my wife, nothing like that. We were friends, best of friends, so when I now said to her, let’s go out, she said to me, are you drunk? She was my best friend on campus at the time. And it has helped us. When you stay with a woman for 34 years, there will be ups and downs, but for us, it’s been an amazing partnership.

How I Fell In Love With My Wife, ONARI Ex-CROSS RIVER Gov. DONALD DUKE was last modified: January 29th, 2020 by Wale Lawal