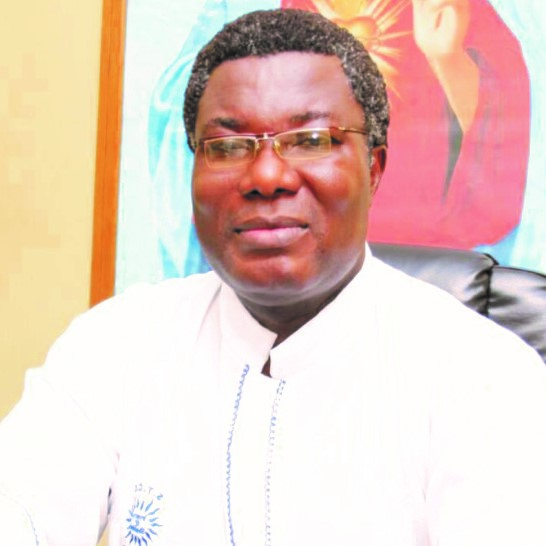 •Speaks On How St. Theresa’s C&S Church MUSHIN Was Founded

Two  Sundays back, church members of Saint Theresa’s C&S Church in Mushin, Lagos gathered in large number to celebrate the end of the Annual Fasting & Prayer Revival for the new year which went on for 21 days. It was a big celebration. Prophet Capt. David Babawole Shitta, the Provost of St. Theresa’s Church of Christ (Cherubim & Seraphim) was also in a happy mood. There was so much singing and dancing. He is a Cherubim & Seraphim prophet.

Last week Tuesday, City People Publisher, SEYE KEHINDE spent some quality time with Prophet Wole Shitta at his Mushin church during which he told City People the story of the church. Below are excerpts of the interview.

You just ended your annual 21 day fasting and prayers. What are the things the lord has shown you regarding 2019?

Last year, when we were having our anniversary, the lord showed me so much about Nigeria, particularly about members of the church. The lord told me that we should be more prayerful, so that there won’t be a division in Nigeria, and there can be peace. He said a lot of things will happen but we need to pray more so that Nigeria would still be intact and remain as one.

We’ve been on that Prayer and Fasting particularly over the last 21 days revival which we just finished. As per the church, the lord showed me he wants to bless his people. He wants to bring back his glory, lost glory in many families, so that he can establish his convenant with them.

How was the event?

It was very glorious. We thank God. There was a manifestation of Gods glory and power which everybody can testify to. We bless God for that. That God in his glory descended upon his people, and to show them the way forward.

How has the church been since it took off, with you running it?

Its been great. Its been awesome. Its over 30 years. The church has been established for over 30 years. Initially, we didn’t want to call it a church. It happened in a very simple way. We would gather together as children to play, singing songs of God and songs of praise, drumming. After sometime we would disperse, everybody will go their own way. But something happened in 1987 precisely.

As usual, we sat down together to play, that evening, around 4.30pm. Upon coming together, we would begin to make sounds. Somebody will pick the spoon, someone will pick a can and we would just be playing and singing. What I noticed is that it’s usually spirit filled songs, through inspiration that will come into us and we would just be playing it. It is usually inspirational. So on this particular day, we were together like that and the Holy Spirit came into us. That is what I know. I didn’t know what happened after that. But I found myself the next day in a particular church and I had been in trance. I could not talk. I was just looking at everyone. I saw myself in a white garment, that was how the whole thing started. So, I went into a trance for 9 days from that day. So after that, we were together again, playing, but this time around with more focus and attention that this is more than a child’s play. So, we called it a Fellowship, lets come together and not only play but also to pray. So, we started doing that. I was born into a Christian family. My father is a spiritual elder in a church. But I never knew I would toe the line.

When we gather together, through the holy spirit and his revelation, people will come from outside and that what baffled me. They will give me messages that God wants to establish a church through me, where we normally gather. And  I replied them. I said church where? No. We don’t have any place to call a church. We are just friends that come together to pray and sing songs of praise to God. So we dismissed the idea of setting up a church not until 1990 precisely. In 1987, I went into trance again. This time around for 21 days it was after that day that strong revelations started coming, that God is going to establish his Church. That this is a church. One Baba Aladura came here then to meet me. He is a respected man. I don’t know who told him we are praising God here. He just came and told us that God told him that he wants to establish his church here. I had to stand my ground that nooo, which church? Who is going to head a church? Who is going to start a church? Church where? Nooo! I have an ambition. I wanted to go to school. I have my plans to have my educational career. But setting up a church means you have to stay in one place. The man was just laughing at me, being an elderly person. He then left. From that day till now I have never been the same man again.

Yes 1989/1990. After that day, another man came from Ibadan. I don’t know him. He said God sent him from Ibadan that if I refused to heed to that call for me to set up a church, something will happen. My mother was alive then. She started counselling me that I should just be careful. She said this is the word of God, that if I don’t fear anything I should fear the word of God. That somebody came all the way from Ibadan, he didn’t ask for money, he didn’t ask for anything. After delivering the message he left. I then asked myself, how do we start a church? I was having a little problem with my dad then. He has a church in Ikorodu. I told my father, maybe they are referring to you. He said no, its me God is referring to. “Its you they are referring to,” he told me. There is no way you can escape it. From that day, I was so scared, until one day when I saw Christ. I was lying down in that place, behind here, where we used for church then. I saw Christ. I saw him on the cross and his blood was dropping on me. When I woke up, I was so scared. I saw fresh blood, I felt it. I woke up and I was so scared, so afraid. I was wondering, Whats the meaning of this? I ran to a spiritual person and asked for the meaning. He said God really wants to use you for a purpose. So from that time, my friends and I decided, that if that is the case, since we have been having fellowship, lets find a day, not on Sunday, since everybody has his own church that he or she will go on Sunday. So we chose Fridays and we sat down to plan it. So we drew up an Order of Service. That was how the whole thing started.

Is it the same C&S Movement denomination that your dad was running then?

Yes. It was the same church, the same denomination. I was not in contact with my dad then. I started my own church here, afresh. When my father heard about it, he was so shocked too, that his son was also having something like this somewhere else. He was happy, because I was the least person he expected this kind of thing to happen to. I was born into C&S.

What stands C&S church out? What are the unique characteristics of the C&S?

The C&S  is in the revelation. Those that are in truth, that serve in truth and experience will surely see God. C&S members in practice see revelations and vision. It is common for members to see Vision and Revelation and they come out openly to say it. I don’t think it is common in every church. It is now that the Pentecost is really taking place in every church and they now stand up to see vision. In C&S, God will show you and you will be able to see it openly, even to individuals. In most churches and denominations, I don’t think it happens like that, whereby you see something and you will be able to stand up and say it. And you will say, you, this is what God showed me about you! And it will be so. So, that is one thing I think that makes C&S unique. The Vision and Revelation, the manifestation of the Holy Spirit and at the time of that pentecost is the most unique thing about C&S.

READ ALSO: WHY I DECIDED TO CELEBRATE MY 60TH BIRTHDAY IN DUBAI

How I Got The Call To Set Up Our Church 30 Yrs Ago was last modified: February 4th, 2019 by Seye Kehinde

Why I Am Eager To Represent IKEJA @ The House Of Reps