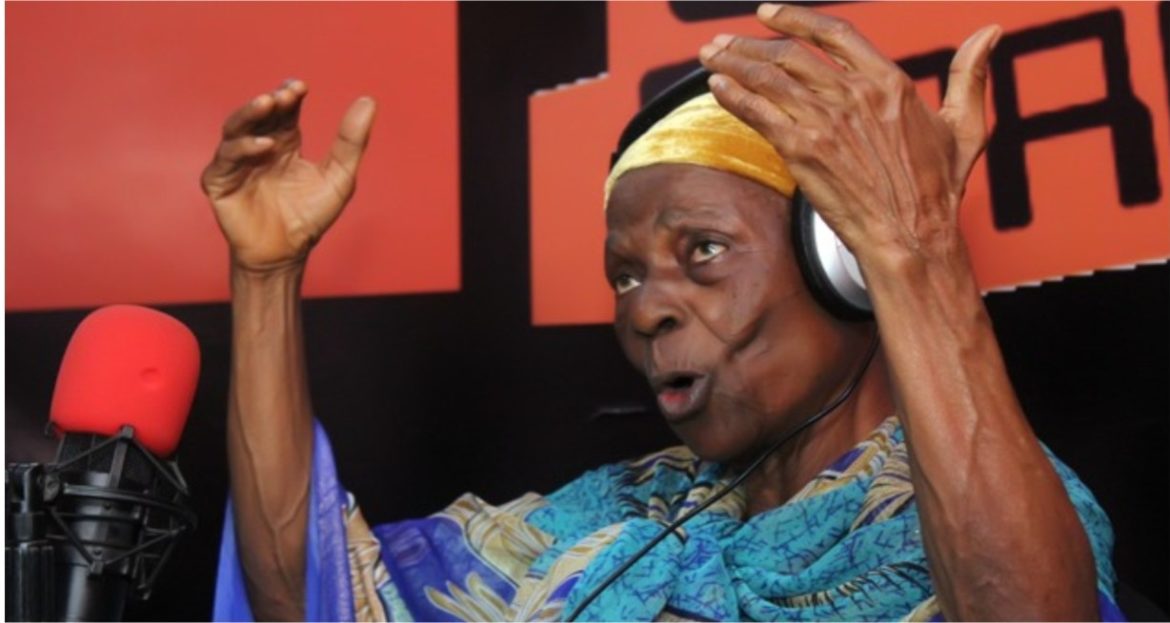 The veteran Yoruba actress, Madam Grace Owoola Oyin-Adejobi, popularly known as ‘Iya Osogbo’, has made some shocking revelations about her acting career and private life at 90. Saying that though she is hale and healthy but can’t act any longer at her age.

Mama, who clocked 90 years of age this Sunday (Saturday 23rd August 2020), spoke extensively on the very beginning of her acting career and how she got the stage name ‘Iya Osogbo’, which has today become a household name in the Yoruba genre of Nigeria’s film industry. She was a guest on a radio program, Parrot Xtra Hour on Radio, on Space 90.1 F.M, Ibadan last week, where she revealed the secret of her longevity and good health.

“Attaining this age is nothing but special grace of God. And the fact that I have never abused my body. I always try as much as possible to live moderately,” Mama submitted. On how she got her stage name ‘Iya Osogbo’, which somehow has overshadowed her real name. ‘’You know as an actor you could be called different names, and the fans out there may not understand the fact that you are not what you act in a film. That is why we complained to our boss then, which is my husband to come up with another idea. We were told to choose suitable names for ourselves and that, that is what we will be called in all firms.

So I chose ‘Langbejo Iya Osogbo’, Alabi Yellow gave himself ‘Alabi Yellow’ and others like that.”

How did ‘Eran Iya Osogbo’ thing then came about? Contrary to the belief out there that the film ‘Eran Iya Osogbo’ shot Mama Oyin-Adejobi to the limelight, she revealed that she has been popular right from her late husband, Oyin Adejobi’s Theatre Group, before acting in Ajileye’s film, ‘Eran Iya Osogbo.

“I was already popular before ‘Eran Iya Osogbo’. In fact, they wanted me to act that particular role (a witch) but I turned it down. How much do you want to pay me that I will now be calling myself a bad name? I had recorded my part of the film and gone back to my house. So all you saw in the film was just a film trick.”

But how did Mama really find her way into the theatre industry? She revealed that acting actually started for her right from her primary school days. According to her, she participated in a race and other sporting activities back then and won several prizes. From there, she developed an interest in acting as well, but she started her acting career officially in 1953 when her husband returned to Osogbo from Lagos.

Late Oyin Adejobi, according to her, had earlier followed his elder brother, Adeleke Adejobi to Lagos, from where he started his acting career in 1948. But came back to Osogbo to form his own group (Oyin Adejobi Theatre Group) in 1953.

“It was when he came back that I joined the group and we started from there. Back then, we had what we called opening and closing day. But because parents didn’t allow their female children to come into the theatre (they believed theatre was for lazy men and wayward girls). So I used to sew a blouse and skirt and put oranges on men’s chests, while I stand in-between them for us to dance and perform the opening and closing day. We never thought theatre could be this acceptable or profitable. We were doing it for the love and passion we had for the job. The applauds and cheers we received after each stage play were enough for us.  Mama Oyin Adejobi also spoke for the first time about the day an excited fan nearly ran her into a gutter with her jeep vehicle on her way to the office of one of her children in Ibadan.

She said this experience has remained indelible in her memory because her thought was that the day was going to be her last on planet earth, except in the end it did not turn out as she feared initially.

“The fan eventually came down from her car to let me know that she merely wanted to exchange greetings with me. She later enveloped ten thousand naira and dashed me.”

On how she met her husband, Mama has this to say. “We were living in the same area. We went to the same school, All Saint Anglican School, Osogbo. In fact, my husband was the organist of the Church before he left for Lagos, after his standard 6 education.”

Mama didn’t but also used the opportunity to admonish the younger generation of Nigerians on the need to work hard and be focused.

She also registered her displeasure over the near-nudity being practiced by actresses in Nigeria’s movie industry, advising them not to be deceived by the pleasures of the world but to believe that they can succeed through dint of hard work and the grace of God.

Her words “I got to attain this age because of God’s mercy. In addition, the Almighty also gave me the wisdom of preserving my body and being moderate in all I have been doing. Our youths should emulate this too. They should learn to be God-fearing too.”

Iya Osogbo, who featured prominently in film productions like ‘Orogun Adedigba’, ‘Kuye’, ‘Kootu Ashipa’, ‘Ipadabo Oduduwa’ and others, lost her husband in the year 2000. But she has since forged ahead to act in several films after then, though not easy but she remained focused and thankful to God.

She said that apart from the death of her husband, the lowest point for her life was when her fourth child, a female died “it took me a long time to recover from that experience”, she offered.

However, her happiest moment was when she gave birth to her first child, a boy in 1954.

Iya Osogbo went further to say that whenever their theater group went to stage plays or was showing a film in a cinema house, she was the one who used to sell ticket unmindful of what some miscreants might do, “as I know that they all love me adding that it was at Jebba that we raised the gate fee of our shows to twenty Kobo which had a lot of value unlike what obtains nowadays where the value of money is nothing to write home about.”