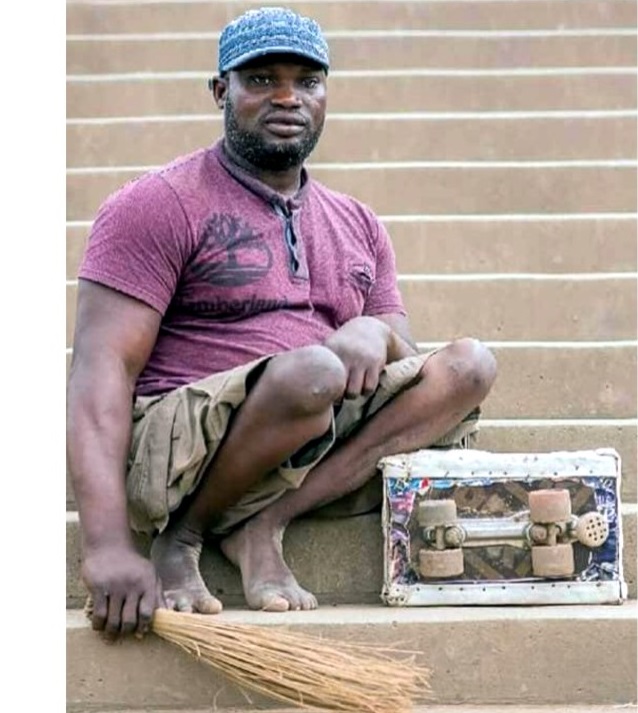 Shuaib Gbadamosi, popularly called Sabalo by his mates is a disabled young man who has spent 15 years as a  Pedestrian Bridge Cleaner at Ikeja-Along in Lagos.  He is from Kwara State. He’s always at the Ikeja–Along Pedestrian Bridge, and he’s widely known there. He is in his late 40s, but his two legs are paralysed. He recalled that while he was growing up, he had measles attack, which led to paralysis of his legs during treatment and today, he’s a Pedestrian Bridge Cleaner.

The story of this energetic young man is sad, but also  encouraging to many. That misfortune drove him to become condemned to living life as a destitute. It’s 15 years now that he’s been under the bridge.

During Fashola’s government, he was one of the workers of Lawma. He was one of the 15 disabled workers working for the Lawma then. Now, he’s been relieved of the job by a new board, Vision-Scape.

A few days ago, City People’s ISAAC ABIMBADE, met with the man on the Ikeja-Along bridge where he does his daily job. He narrated how life has been for him in the last 15 years working as a Cleaner of the bridge.

He said Fashola’s government helped him.” During Fashola regime, LAWMA employed some of us because I’m not the only one doing this work; we are at every over-head bridge in Lagos. I’m the one who usually trains them on how to do the work (cleaning job)”.

We have our association (Physically Challenged). Since Vision-Scape came, they haven’t paid us. They have even retrenched some of us working for LAWMA. Out of 15 of us, only 2 are being paid, but I couldn’t leave the job because I’m a family man. I have children who are mature and some of them are in schools. I have 5 children, they all reside in Ogun State with their mother. What I would say is that, I want government to have mercy on us. They should continue the way it used to be for us. We will do everything they want us to do” He also spoke more about his children. Yes, my children are good, they go to school, and some of them are in public school because I don’t have enough to send them to private school.

I know that God would not come down from heaven; He would send someone to help the other man, but I would plead for government’s intervention. Some of us are skilled and  have been trained in one profession or the other, but we don’t have capital to start a business. Like myself, I know much about business; things that could easily move in the market. Although, the government is trying, but it’s not enough because it’s hard these days to feed especially when you have  family. I even pay their school fees. I don’t want to do this job for the rest of my life because I’m in my 40s now.

What are the things that discourage or give him headache as a Cleaner of the bridge? “The more we try to clean the place, the more some people are determined to frustrate us. Some people will bring bags of dirt from their houses and dump them on the bridge but we must make sure that the refuse leaves the place fast. There are times I see people deficating there. The bad things I also see here are some young persons, who will not want to work, but to snatch people’s bags. I drive them away from here often and that’s why their activities have reduced. Even the market women have been trying to sell here, but I don’t  allow them because the government too would not allow them to do so” So, anytime I leave here, they would come with their wares”.

Shuiab chose to render community service, while people favour and appreciate him with monetary gifts in return.   He has been at the bridge for the past 15 years, carrying out his ‘humanitarian’ service on a daily basis”. Shuiab also thanked God that he survived his ailment. He recalled that “many children had died of the deadly disease then, but he thanked God, He spared his life”

I will still plead with the government to help us. I have helped so many colleagues to enrol under Lawma.

Most people, especially around Mile 2 know me; nobody there would say he doesn’t know me. My alias is Sabalo. Many of them know me. I thank God where I am today. If I had decided to sit at home, the little God has done for me today maybe I wouldn’t have had it. I see a lot of good people here everyday, and to that, I give God the glory for my life.