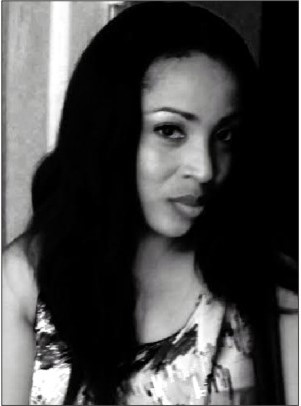 •Denies Being Brainswashed By The Prophet

Last week, the social media was set on fire with the story of an Ibadan based visually impaired prophet, Muideen Kasali taking another wife. The story, according to what is been trending online, was that the prophet is holding a woman called Dolapo at his Alaseyori Prayer Mountain, located at Oba Ojedeji 11, Moniya, Ibadan; parading her as his new wife. The woman, it was gathered, was formerly involved with the ex-National Football star, John Fasanu. Their relationship, we also scooped, didn’t only produced two children but the football star also bought her a house at the exclusive Banana Island in Lagos.

But how did this British born beautiful lady and a mother of two, Dolapo and Prophet Kasali’s paths cross as you may ask? According to the new spreading on the social like a wild fire, Dolapo must have gone to the Prayer Mountain for spiritual help but ended up becoming his wife. The import of the message being spread on social media is that the woman in question must having being brainwashed by the prophet and may need urgent help. A new twist, however, was introduced into the whole matter as Dolapo’s voice, denying the story that she is being trapped, has since surfaced online. In the audio, Dolapo described those spreading the force alarm as people who are envious of her present position. Accusing one man of colliding with her enemies to maligning her person. ‘I need to come out and speak because my family and friends are worried. Some people think I have been kidnapped, this is totally ridiculous. But I just want to use this platform to tell eveone who is worried about me that I am fine; there is nothing wrong with me, I have not being kidnapped neither I am I under any voodoo or jazz. I do not believe in jazz neither do I believe in voodoo so it can’t catch me and it will never work for me. I don’t have that background. My mother is a Catholic and I am a Redeemer. So, that is total nonsense. If in this day and age people still believe that people can be jazzed and all that  well then I am really sorry.  Aside from that, the man who has been slandering and writing a lot of rubbish about me, he is half a man so I refused to give him audience. I can’t speak to a man who doesn’t respect women. We are not in the olden days where you can just talk down of women. I am a woman of integrity and I know my rights. So, i refused to give audience to a man who doesn’t know anything about me. He has never met me. And decides to take on another man’s house and cause unnecessary issue. So obviously he is got a lot of issues going on in his life and I am not on this platform to insult him or anything. I just want to pity him and pity his life honestly. I don’t listen to issue anymore but people that are concerned had sent one of two things he is been saying about me. To be honest with you I laugh because I know the people behind this. “Now, if you hold the kind of position that I hold, if you seat in the kind of seat that I am sitting of course you are going to have enemies.” You will have enemies. Daddy is a wonderful person. He is a man of God, he is well respected. “Like I said to you earlier on, to the best of my knowledge, he was living separately with his wife. So there so many women out there who would love to be in my position.” So why won’t they gang up and write rubbish about me? Of course they will do that. You know the funniest thing? Let me make you laugh. For you to know I already had a call from one of them this morning and the person called and was saying to me how frustrated I am, trying to know if they are really getting at me and all that. And I was just laughing, a woman for that matter. So there is a lot of nonsense going on out there and I know where this is coming from and I feel like I am the main target here. “The people who were stealing from him want me out, the people who want to be in the position that I am in now want me out.”

So, of course I am going to make enemies. I know I am going to face prosecution; Jesus Christ was persecuted. Buhari, the President of the Federal Republic of Nigeria is being insulted and abused. Mrs. Jonathan Goodluck was insulted when she was the wife of the president. Who am I for them not to write rubbish and blog me? Even Ooni of Ife and his new wife for God sake are being insulted. I am sorry blackmailing me won’t break me. So, the man behind the controversy should continue to blog me, you are just making me famous for the next level of my life. I have always like to do things from behind, I don’t like to show my face but I just realized that when you have a calling and God want people to know you, He would push you out whether you like it or not. I don’t show my face but I have got nothing to hide either. God has blessed me in every possible way a woman can be blessed. And for your information, “I didn’t go to Baba for anything.” To the glory of God, I didn’t have any problem. I was just being there for a friend, who I will not want to bring into all these. A friend had issue and she asked me to go there for her. She doesn’t live in Nigeria. I was coming back from London to Nigeria and that was what I went for and Baba can confirm what I have just said. But I don’t go to Ori-Oke. And for the picture that is being brandished up and down, I look good without makeup and I look good. I am a party popper. When I need to go to party, I know how to  put on the things that are needed to be put on and I will look a million better. Why would I wear makeup to go and pray? It was a praying period for me yesterday, I was praying and I am sorry I love myself even if anyone doesn’t like me. And the people around me love me as well. “So, this is a platform to tell all those people who are writing nonsense about me, who are hoping I will leave where I am, tell them I said I ain’t going nowhere. I came and I am here to stay.

For whatever reason best known to daddy he said God asked him to speak. He is a man of God and when a man of God tells you God asked him to speak, what do you want me to say? He should listen to me? I will never impose myself on a man. I did my bit and he said he had to listen to his God and I let him to answer his master. So, it has nothing to do with me. The man writing all these rubbish can continue to, He doesn’t have enough information I am sorry. So, please go ahead and the people who are paying him to write rubbish about me, don’t worry they are coming back to check if it is hitting. Hear me, it is not hitting me at all. God prepared me for this and He is fighting my battle for me. The sky is not my limit, I am just getting started and I am going places,” she said.

All efforts by City People to speak with Prophet Kasali proved abortive last week. But in another audio circulated online during one of his Prophetic Programs on social media, the man of God confirmed that indeed himself and Dolapo are now living as couple. In the audio, Prophet Kasali said no amount of blackmail can silence him or his ministry. He described those circulating Dolapo’s picture during a prayer session, insinuating that she is presently wallowing in poverty due to her dressing, as mere distractors.

READ ALSO: EL-RUFAI SHOULD TAKE A LOOK IN THE MIRROR

How I Was Able To Produce 12 Movies In My 5 Year Career – Popular Yoruba Actress, OYITA