Home News How I Toasted My Wife, @ UNILAG Over 25 Yrs Ago – Babajide Sanwoolu
News 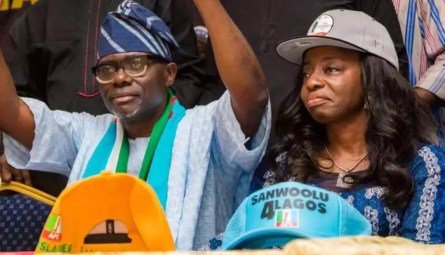 Babajide Sanwo Olu is the Lagos APC Guber candidate who has been campaigning vigorously towards next year’s election. He is a man with many visions and one who believes good works say it all. He has taken the bull by the horn with his house to house campaign in the last few weeks.

The man who has cut an edge for himself both in the private and the public sector is no small fry in politics. Born 53 years ago in Lagos State, he is an astute politician, trained Surveyor and public sector expert in human resources.

He is from a Christian family and the entrepreneur turned politician has a good family to go with. As he has made a huge success of his career life so has he made of his marital life. He is happily married to a beautiful, highly reserved, power house and quintessential woman of substance, Dr. Mrs Claudiana Ibijoke Sanwo-Olu. If all goes as planned by the party, Dr. Mrs Ibijoke Sanwo-Olu will become the first lady of Lagos State and her status will change automatically.

This career woman surely fits into her husband’s rising profile. Though she is very much on the quiet side and rarely steps out for events, she has always been a modest woman and mostly attends events that are work related. But in recent time she has stepped up the game, storming the social scene and attended over 6 events in the last 2 months most especially with her husband.

She is not your run of the-mill woman, she is highly respected within her social circle. Very intelligent, cerebral and not really in the public glare like her husband. Not many know her except for few who are her friends, family or colleagues that knows her. Her husband has not spoken about his marriage in all of his interviews but recently he spoke glowingly about his better half to an online platform, how their paths crossed, how he toasted her and what attracted her to him.

It was an exclusive revelation. On how they met, he responded “We met in the university. Maybe you do not know I was a DJ. I used to be a paid DJ, meaning that I have my cassette player and other things. You guys now use MP3, flash drive and all. In those days, I used to carry all my cassettes and record box around. I met her at one of the Jambite parties that we used to have for new students. I had been in the university before she came as a Jambite. One of the things that usually happened then was that we always served ice cream in our parties.

It was not the conventional parties of rice and plantain you have these days. The good thing about the whole thing is the fact that apart from being the DJ, which means I would give them good music, I was also the person to serve the ice cream and that means I would only give the ice cream to whoever I wanted. So, it was in the course of serving ice cream that I spotted her. I saw her and said to myself, ‘wow, this little one”. She was very innocent and looked too little. Today, she is a Medical Doctor.

As a medical student then, after the first year at Akoka, she moved to LUTH at Idi-Araba to continue her medical studies. So, we continued. No telephone then, so I had to do the trips. It had to be measured trips of every two weeks. You need to say to yourself that I will be back in two weeks, you better be there. That was how our relationship grew. We dated for a long time, about 8 to 9 years before we got married. Like they say, everything is now history.

Our lives together have been a rollercoaster. We have had our ups-and-downs like other people, which I think is part of life. Life is not a bed of roses. There have been times I have not been the perfect guy. I am human. One of the things that I know is that she is the stronger one in terms of family orientation.

She is the one with the kids, and takes care of them, while I go hustling like every man does. I am like your regular hustler.

When I was in banking I had to hustle, and in government you had to stay pretty late. She has been very consistent with the children, even with her work, combining everything together. What most people do not know is that she went to the university more than me. She has so many degrees and professional qualifications.

You know the nature of her job where they take Oath of Service to humanity, to always care for the people. She had to do all the night calls, and was still able to combine them well with her role as a mother and wife. On several occasions when she had to do her night calls, I also played the night call duty at home with the children too. In all, it has been an interesting journey together. We have different parts to play and we are doing excellently well together. We have grown to become stronger and become better persons.

He also spoke on being a family man

“It is almost three decades. Almost 30 years now. Well, to be very honest with you, my wife has been the stronger person with the children as I said earlier.  She has been around the children more than I have been. I have missed few tea parties with the kids. You know when your children are in primary and nursery schools, there were tea parties they had at 7 o clock or 9 0 clock in the morning.

I really cannot see how I would attend some of them – the meet and greet parties for primary 3 or 2 pupils that parents have to attend. She was always there for the children, but once in a while when I show-up, the children were always happy.The little time that I get to spend with them were quality time.

We go on a few planned vacation together within and outside Nigeria. We make sure the children are with us during such vacations and we enjoy such moments together as a family. In terms of being a perfect family man, I really don’t know what a perfect family man means or who one is.

I have run my race and I think if you see my children, you can ask them how I have done as a father. I cannot sit here and begin to judge myself. My children have turned up very well with God helping us. A lot of credit must go to the Almighty God for protecting them and for helping them to become the great human beings they are all turning to. A lot of kudos to my wife and some kudos to me as well’’

He also has an enviable background in the private sector with almost ten years’ experience in the banking sector having contributed to the growth and development of Lead Bank Plc, UBA and First Monument Bank. He obtained a bachelor’s degree from the University of Lagos and also an MBA in surveying from same university. He attended the Kennedy School of Government, USA; the London business school as well as the Lagos Business School (LBS).

He was appointed special adviser on Corporate Matters by the then Deputy Governor, Femi Pedro in 2003 and was also appointed Commissioner for Commerce and Industry in 2007 during Bola Tinubu Era.He also served as Babatunde Fashola’s Commissioner for Establishments, Training and Pension between 2007 and 2015.He is an associate member of the Chartered Institute of Personal Management (CIPM) and fellow of the Nigerian Institute of Training and Development (NITAD).

How I Toasted My Wife, @ UNILAG Over 25 Yrs Ago – Babajide Sanwoolu was last modified: December 30th, 2018 by Tayo Oyediji