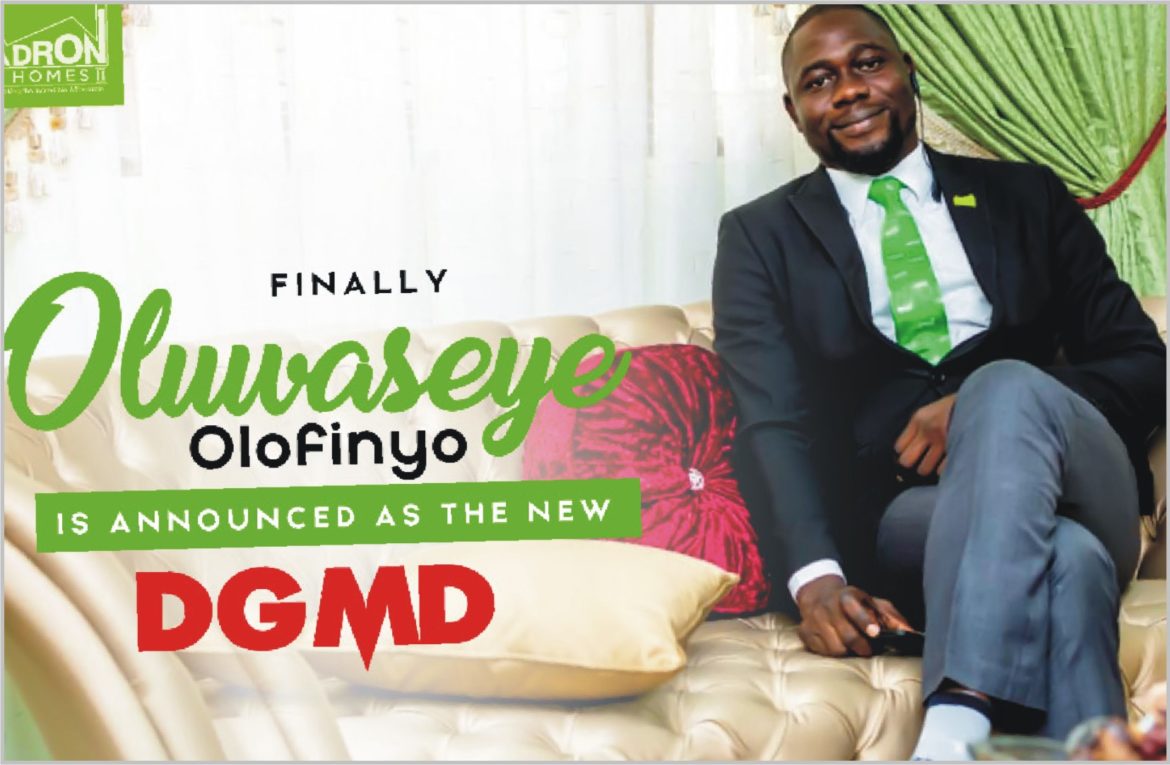 Adron Homes, a leading real estate firm has a competition it has been running amongst its staff. It’s called The Incredible 12. The Season 3 of Incredible 12 which was held in June, at Inagbe Resort, Apapa witnessed special intellectual contests and mind games from 12 Adron Homes Staff, who have displayed exceptional delivery in the past month.

Out of the 12 contestants who made it to the grand finale of the competition, Oluwaseye Olofinyo emerged the winner, having gotten the highest number of points from the judges, who were with the contestants throughout the competition.

In an exclusive interview with City People Online Editor, SEUN JOSEPH, and G.M Special Project, LEKAN ODUNOWO, an elated Seye said winning the competition has opened his eyes to so many challenges and opportunities that will make him a better person, even after vacating the office for the next 12 incredible winner. He also talked about how he intends to use his experience while in the office to amplify the collective vision of Adron Homes. Read excerpts from the interview.

First of all, let me congratulate you on your emergence as the season 3 winner of the incredible 12 contest. Can you share with us how you feel as a winner among 12 contestants?

Well, I feel super elated. It actually came as a surprise to me. I wasn’t expecting to win it. Like clearly I was the least person to have won it because even while we were in camp I have other engagement back in Lagos. There’s a professional exam I needed to take on Saturday, so I was out of the camp. I was in Lagos while other people were competing. By the time I came back and heard about the activities they’ve done, in my mind I just knew that it’s done for me, let me just work with my team and ensure that the winner comes from my team, The Indomitable. And alas, we came here on Monday, I was announced as the winner. It really came as a surprise.

Can you take us through the journey? How the Incredibles 12 were picked, what happened in the house and how you eventually won?

Well, the choice of who become an incredible member starts from the past month, as a matter of organization policy, know that what we primarily do is sell lands and houses to people a such, everybody are handpicked across different cadres and levels of the organization, gets picked as to how much sales was made and the top 12 from this different specific roles become the incredible 12. And they are taken to experience a new location they probably have never visited before and they train them, they participate in activities. In my time we went to Inagbe resort. Its an Island just behind Apapa. We were at Inagbe for the entire weekend. On camp, we were split into two groups so I was in the group called the Indomitable and we have the other group as well. The two groups are expected to compete with each other in several activities.

And there are sole activities where you specific competitions called the GMD’s task. Where you have everybody working for himself or herself. You have to go look for a specific thing at camp and bring it back to an agreed point where the judges are waiting to see who gets to pick the price. All of these counted as points for you so. At the end of the day, all of these points are collated together and then the highest, I believe is who emerges as the deputy group managing director.

Did you know what actually stood you out during and after the competition?

Well, to be honest, no I still do not know what exactly stood out for me on camp. Because, like I said, I wasn’t available on Friday, so I missed about two competitions; the presentation to presentation and then I think the mind exercise on Saturday. So, I’m not really sure there was anything spectacular apart from when we had a presentation session, and then I won the GMD task that’s day. Maybe that was what counted. But then, I’m pretty sure the judges have their matrix and they call for independent verification, they will be able to provide it.

How has the job been? Being in the shoes of the GMD?

Well, that has been like the most challenging part of it. I have told a couple of people around me that being a deputy managing director opens your mind to a new perspective of life. If you think you understand the trajectory of life as a mid-level manager or a junior member of the team, by the time you climb into senior management you have to unlearn the things you’ve learned in the past and you have to begin to learn new things, so for me, this has been more of a learning call. As to understanding what is obtainable at the senior management level; how to be able to put things together.

It gives you a mind-blowing experience as to how your bosses have been able to cope and how they have been able to put things together. At this point, it puts me in a position where I am able to appreciate more than ever before, what my able GMD and then the CEO Oba Adetola Emmanuelking and our executive director, Olori Aderonke Emmanuelking, continually do every day. Now I know that these tasks they take on behalf of this organization is not easy. And this is not about Adron Homes alone, we are a group now, and as such having to think and keep themselves abreast of happenings across the entire group is something that is serious. It is no Childs play.

So the social angles now.. we understand you get to enjoy all your boss’ luxurious cars?

(laughs).. oh that..it has been amazing as well. I have had the opportunity of even more than the specified official car I was supposed to ride. The G63 Mercedez Benz Turbo with V8 engine, practically it was my first time in G63 and I’m like oh, wow..if you have your goal set on a Lexus before, the day you ride a G63, it changes. Due to little challenges, I had to switch to 2017 Toyota Land Cruiser, and I tell you, it is something everybody should work and aspire to own someday.

What will be your take home lesson after your time as the DGMD?

For me as a person, it is a lifetime lesson. There are things that happen to you as an individual that leaves an impact in your career path, it puts you in a position where your aspirations become different, your life goals become different. If you’ve thought you want to aspire to become A, now you have to begin to think E, you have to begin to think Z. and that is what this has been for me. And even if I cannot get the opportunity of retaining this seat as DGMD, for me, it has put me on a different trajectory where I’m able to align better my path, it has taught me to be able to organise things better, to be able to make cautious plans and effort towards achieving success on a managerial level in the nearest future.

Let’s run through your background.

Literarily, I was born in Ondo town, in Ondo State, from there; I had my primary education at St Raphael. Due to the creation of Ekiti state in the year 1996, my parent had to relocate because they are civil servants. I eventually graduated from Government Science college in Iyin Ekiti, because I was into a science major, and it was the only secondary school in Ekiti state that was directed towards science programs. Then I moved to LAUTECH for my first degree. I studied human anatomy. It’s a medical science course and then, along the line, I found myself on the path of technology; it’s been an inbuilt from time though. So when I finished school, I got my first job as a software developer and from there, a path all the way down till I join Adron Homes as a junior IT support staff, and over the past two years, I got promoted to become the head of IT for Adron Homes and now the deputy group managing director.

How have you been able to cope as an IT person in a market-driven organization like Adron?

Like I said earlier, it’s been challenging but then, I have been able to hit the ground running based on the task the mind challenges and the training we were given on camp at Inagbe, it actually helped, such that I hit the ground running. It was my very first one and half week on the job was literarily crazy. I was on the road for about 3 straight days sleeping in cars, I had the opportunity of working with the GMD when I first joined in Abuja and I had an insight to how tasking the job was so for me all I did was to put my mindset back to the time I was with GMD in Abuja; how we used to work long hours and short hours of sleep; I was able to cope and deliver result. So that has been able to help.

Any chance of leaving Adron?

Of course no. the reason being because Adron Home has given everybody the opportunity to become they aim to become whoever it is they want to be. It is not about the pay; just like what the GMD will always say, at Adron, everybody is an entrepreneur and you write your own cheque. So regardless of whatever they want to pay you out there, Adron gives you the opportunity to determine how much you want to earn at the end of the month.