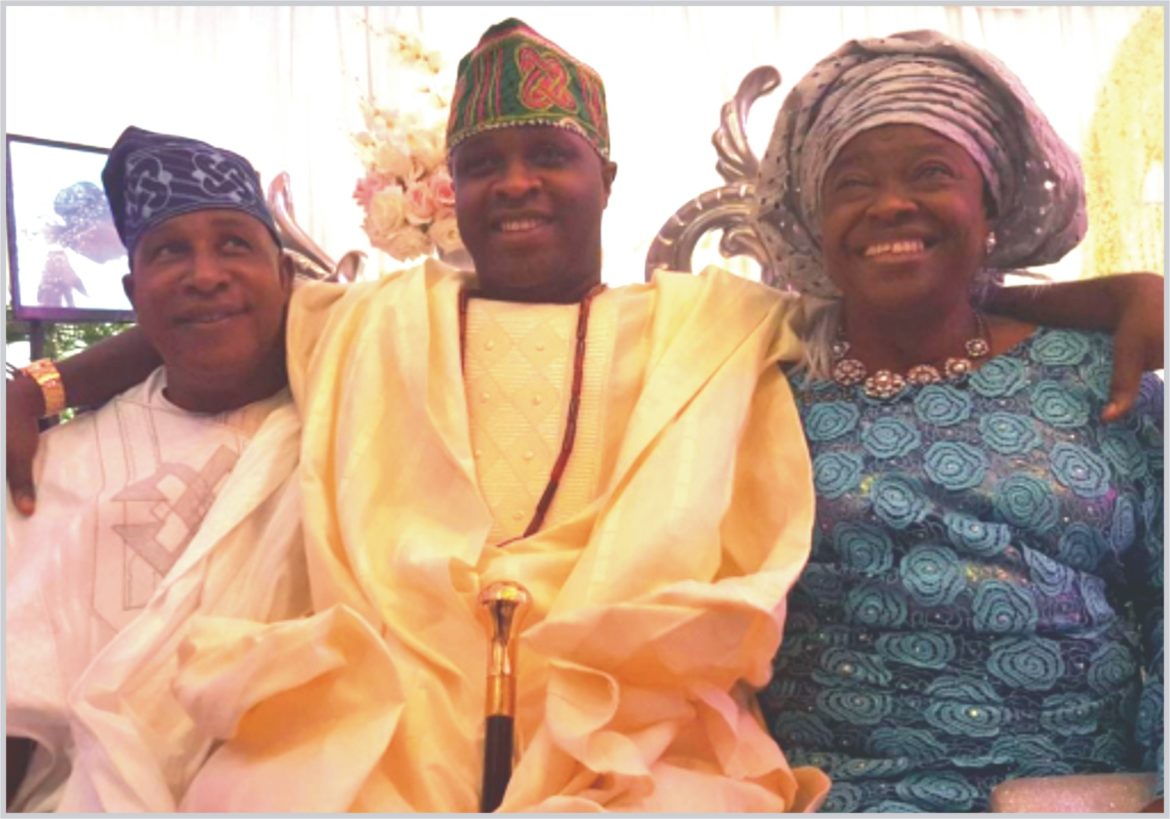 Not until a few days ago when Oga Bello celebrated his birthday, not many knew much about his private life except his many children dominating the movie industry. The Salamis are one of the best hands in that industry. Their father is not just blessed in his career, all his children are also making him proud.

Many weeks ago, Oga Bello and his wife, Ejide opened up to Tunde Kelani TV on their 45 years amazing love story. Enjoy it.

Your wife said you became friends from primary school?

Yes, we were friends from primary school. Our uniform was “pinafore and she had a way of rocking hers. That was how I noticed her. So I always give her punishment whenever she does anything wrong. Sometimes I tell her, “you will wash the toilet.

Then later, she would buy me meat-pie from Kingsway, rice from Iya Congo and that was how we became friends. We got so close during our primary school days but there was no emotional attachment.

At what point did you become very close?

That was 1966. We love each other so much that we got married in 1975. I grew up with my Uncle. So at one point, she wasn’t happy with what I was going through. But I told her not to be bothered. My Uncle was a disciplinarian. I had 2 stepmothers. One sells rice while the other sells beans cake. I will wake up early to wash rice to cook while I will wash beans for my 2nd stepmother. If my 2nd step mum didn’t finish selling her moimoi, I will hawk the remaining (laughs). I also sold rice too. I also fetched water later in the evening.

This was the point my wife and I became so close. She always joined me in the evening. She will help me fetch water and carry it closer to my house and I will take it in.

Despite your young age, how were you able to keep it under wrap?

As I said, when we started, we didn’t know it was love. There was no attachment at all. Don’t also forget that when we were much younger, you dare not allow your parents know that you are in love with any girl or boy. So what we did then was whenever we want to see each other, I will ride my bicycle and whistle. She understands whenever she hears me and always runs out to see me. There was no mobile phone yet we were able to see each other whenever we so wished. Many were always surprised that we know how to give each other signals despite how young we were.

It dawned on us that it was love after we gained admission into secondary school. During our primary school days all we did was just writing all these small letters, do you love me? Yes/No. (Laughs). It was pure innocent love. I always send letters in secondary schools.

What has sustained your marriage?

What has sustained our marriage is the fact that she abides by all my rules. She loves me unconditionally and she also makes the marriage work. My wife is one in a million. (Oju kan la de e ni). She is not a 2-faced wife. Aside from this, when we left school and I was working with Federal Ministry of Housing and I was still acting, all I wanted for my life is “me and my wife” but Almighty Allah said that is not my destiny. I remember after we got married in 1975, we will eat breakfast together before I will go to the office. When it is time for Lunch, I used to close by 3’Oclock then, I will come home straight to eat lunch. After a few hours I will go to rehearsal, my dinner is ready. Whenever I received my salary, I will go to the supermarket to do shopping. Then my wife was a Teacher.

She would have also bought foodstuff. She didn’t do the teaching for long before she started a business. She is always travelling from London, the U.S to buy goods to sell. But after stardom, I couldn’t manage it any longer and that was why I said it is destiny. Though I was told that it is my destiny but I couldn’t help or stop it. I remember when the children were getting many, I always tell myself “what rubbish have I got myself into; yet I didn’t stop. Do you know that despite all the things I did, my wife didn’t fight me? This is why I love her so much and I respect her too. The only thing I told my God is that no matter what happens, no matter who the person is, either a baby mama or a wife, no one can disrespect my wife Ejide and they know.

How did you tell your wife whenever you put any woman in the family way?

(Hmm). I love my wife for many reasons and this is just few of the reasons. I remember one I did, I had to run away after I sent my friend to tell her. It was not an easy thing and this is why I said: “maybe it is my destiny”. I knew I didn’t like what I was doing but I didn’t stop.

If you come back to this world, would you marry your Ejide?

Haa, 100 per cent yes. This is because of all her qualities. My wife is one in a million. My wife is accommodating. Even my 2nd wife saw that behaviour in her and emulated it. It is wives that will make the home peaceful.

Even though my wife Ejide, I was able to know the importance of prayer despite my Islamic background. If you have a wife who has all the qualities of Ejide, you will marry her one million times. She is accommodating, industrious, intelligent and business-oriented. Though there is no woman without her other side but Ejide is one in a million.

READ ALSO: HOW THE ALAAFIN OF OYO CHANGED MY LIFE – QUEEN MEMUNAT ADEYEMI

How I Wooed My Wife In Primary School – Oga Bello Reveals A Lot was last modified: June 1st, 2020 by City People

How The Alaafin Of Oyo Changed My Life – Queen MEMUNAT ADEYEMI