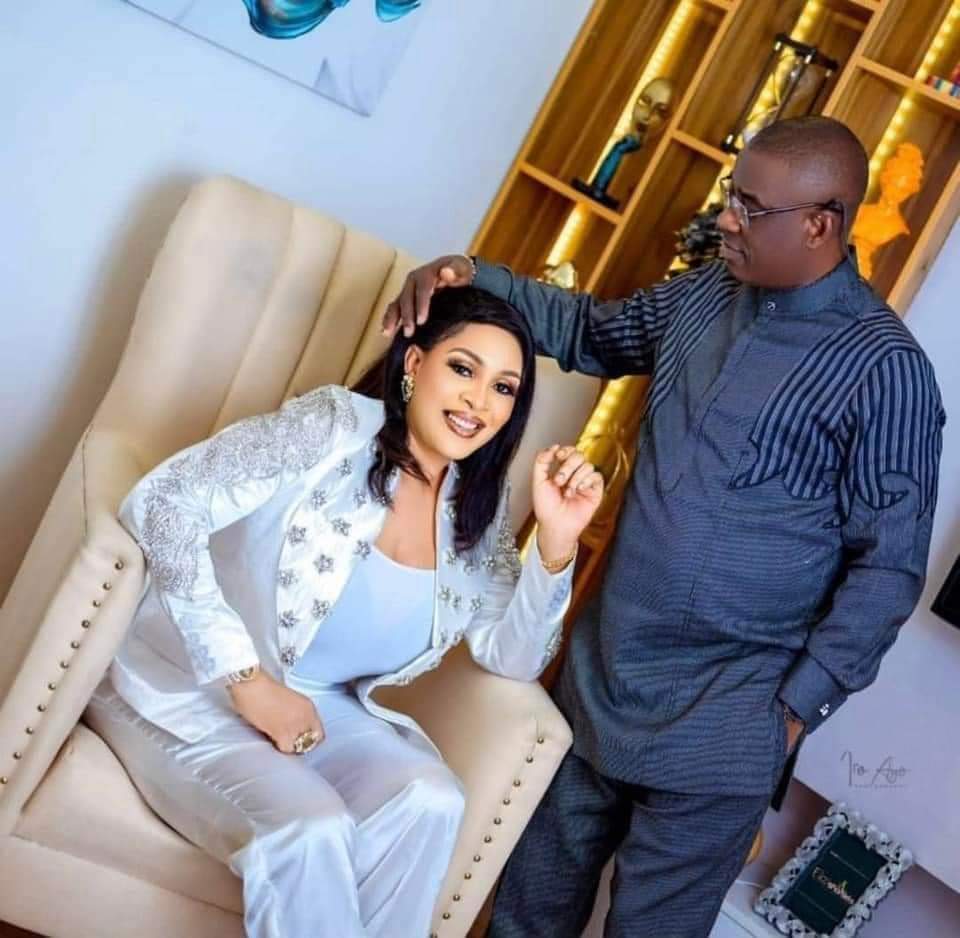 K1’s grand wedding to Lagos celebrity lady, Emmanuella may have come and gone, as 2021 Wedding Of The Year. But what it has done is to pitch many Lagos society women against themselves. Many of them have stopped talking to themselves, on account of which side of the divide they belong.

As it is now, there are very many society women who no longer talk to each other. This is as a result of the rift that the wedding caused among them. It is because the decision of K1 and Emmanuella to marry, divided the ranks of these Lagos society women.

On one side are the big society women who are friends of Titi Masha,  while on the other side are friends of Emmanuella Ropo and her caucus. And there are those who have remained neutral. Those close to Titi are of the opinion that Emmanuella should not have married K1 because she is friends with Titi & K1. They can’t just believe their eyes that K1 will go ahead and marry Emmanuella and then dump Titi.

Those in the other group don’t see anything wrong in Emmanuella marrying K1.As far as they are concerned, the ultimate decision of who he wants to marry lies absolutely with K1. And he it was who took that decision to marry Emmanuella.

The 3rd group are those who don’t want to be dragged into the controversy at all. Before the wedding last week, both groups had been fighting themselves on social media, as they rained abuses and curses on each other. The plan and plot was to intimidate the Bride, Emmanuella into backing out of the marriage. But she with stood all the intense heat, not after all she went through.

So, by the time the wedding took place in Abeokuta, it took only tough society women who are ready to withstand the heat, to attend and appear dressed in the beautiful Aso Ebi that Emmanuella had picked for the wedding.

Despite all the intimidations, many society women still  travelled to Abeokuta and posted photos that they were there Live, at the wedding.

The Oluaye Fuji himself had reached out to many celebrities, both male and female and some Obas to accompany him to Abeokuta for the Nikkai &  Introduction ceremony, where he was to formally ask for Emmanuella’s hand in marriage. They did. They stormed the wedding. Emmanuella is from Igbein in Abeokuta, where she is a titled Chief.

The King of Fuji music,  performed his marital rites on this Lagos Celebrity lady, who is a stunning beauty. It was a classy event.

And the Odebiyi family, his in-laws, warmed up to receive K1 and his friends. One person who missed the event was Emmanuella’s dad. He was buried early this year. Her father died on 4th May 2021 and was buried in June 2021. It was K1 who thrilled guests at the burial reception on Friday, 11th June 2021. It was a 3-day burial rite.

How did the whole story break out? Many weeks back, when the news of K1 going into a secret marriage with Emmanuella first broke, many people didn’t believe it, because they wondered why he would marry Emmanuella secretly. They felt the K1 they know won’t do such.

City People dug deep and found out that both have been age-long friends. We found out that the rumours of the secret wedding weren’t true after all. What was however true was that K1 and Emmanuella had now begun a serious relationship because of the embarrassment Emmanuella suffered. Both now started stepping out together, and the videos to that effect were in the public space.

City People gathered that K1 and Emmanuella had been friends since 2009. We found out that Emmanuella has always been a huge fan of K1, just as very many other celebrity ladies, who love K1 and his music. But when a few months back, rumours began to make the rounds that K1 was seriously in love with Emmanuella and his wife, Titi raised the issue, K1 was said to have told her that he wasn’t into any serious relationship with Emmanuella and that she was one of his female admirers whom he had known for years.

But by the time more stories, believed to have been sponsored, began to make the rounds on social media, K1 was said to have been angry about it, especially when all sorts of allegations were being hauled at Emmanuella and before they knew it, the internet was agog with a big battle between friends of Titi versus the friends of Emmanuella, as more and more celebrity women joined the fray and the 2 groups began to curse themselves openly on Facebook and Instagram. More celebrity women were dragged into the matter. K1, we gathered, didn’t like all the mess, and he allegedly called on his wife, to caution her friends, who had launched an attack on Emmanuella, whom K1 believes has not done anything wrong.

Insiders revealed that it was when the attacks became intense and persistent that K1 now stepped in by commenting on the issue.

He began to eulogise Emmanuella on his Facebook page. A close friend of K1 revealed that K1 didn’t think much about all that was going on until it took a turn for the worse. He then took to his Facebook page and wrote an Oriki.  “Nuella Mii Ajike, Ojanimogun Ara Ijamo, Omo Epo N Pon roro, Aja N ro dede…. My Nuella Ajike, Ojanimogun of Ijamo. The child of the epoch is very difficult. The dog is thinking very well.”

A close associate of K1 told City People that it was the vociferous attack launched on Emmanuella that made K1 rise in her defence. And he now decided to marry her. He was said to have decided to marry Emmanuella because of all the “nonsense” that was hauled that at her. Insiders have revealed all the lovey-dovey and show of love at the wedding by K1 for his new wife was a coded message sent out to all those who did not wish the couple well. It was to prove a point, revealed an insider.

What could have led to the breakdown of the marriage between K1 and Titi? This is because many did not see it coming. K1 had, over the last few years or so, been full of praise for Titi. In several interviews & at several live performances, K1 had publicly praise-sang her.

So what happened? We can tell you why. We heard that the cracks became visible in the marriage when Titi began to listen to 3rd parties who kept regaling her with the tales of the many women who were allegedly close to K1. From time to time, many of her friends kept sending her videos and photos taken from shows where different ladies danced and sprayed money on K1. Along the line, she heard stories of how close Emmanuella had become to her husband and she began to throw tantrums at K1 and began to complain.

Interestingly, one of the things her husband had warned her against was never to indulge in keeping tabs on him. Those close to K1 revealed that K1 had warned her to desist from engaging in any social media offensive against any of his female fans.  But her friends say as a woman, she found it difficult coping with the gossips and insinuations that he had too many women around him.

Interestingly, we heard K1 had repeatedly explained to his wife not to listen to all the rumours and gossips about him and women. He had always told her that as a STAR and going by the job he does, it will attract women to him and that it is not every woman she sees around him that he is dating.

City People gathered that what led to the collapse of the marriage was the role some friends played by constantly feeding K1s wife with information about her husband.

They were constantly monitoring her husband’s movements and were feeding her with information on his female fans and admirers. This led Titi to now begin to choke him and soon she began to nag him about all the ladies around K1.

City People gathered that K1 didn’t like this and he told his wife several times to desist from doing this. He even asked her to call some of her friends to order, but things went on abated and K1 didn’t like all these.

City People gathered that K1 was very unhappy at the turn of events. He is very angry that much as he made sure that his marriage worked, his wife didn’t give herself peace of mind. An insider revealed that to make his marriage work, he made sure he shielded his wife away from all the distractions that come with his high profile lifestyle that he lived and a few times they met at functions, he celebrated her to high heavens. To further show his wife love, he named all his businesses after their 3 children. For instance, he called his bread business ANJOLA Bread, to his Bottled Water and his rebagging of Rice business, at the expense of complaints from his other kids, from other women.

Explained an insider, “Alhaji did a lot to make Titi happy, but she didn’t really appreciate all K1 did. She wanted K1 to herself all alone. She should have realised that she is married to a superstar, whose stardom will attract women to him. She should know that it is not every woman who comes his way that he is dating. This is what you get when a woman is married to a showbiz star and she keeps monitoring him around to see whether he is cheating on her or not”.

There is a 3rd group that feel that Titi did not handle the situation well. They feel that she also didn’t manage K1 well. They insist that she should have appreciated all Alhaji has done for her and the many concessions he gave her. They explained that it was to shield Titi away from many society people that he told her to keep a low profile and live where she has been living. Because K1 is on the road 24/7 and he feels his wife can’t be going up and down with him, he insisted that she stays in Lagos and only comes on visits to his Ijebu-Ode home where he lives whenever he is in Ijebu.