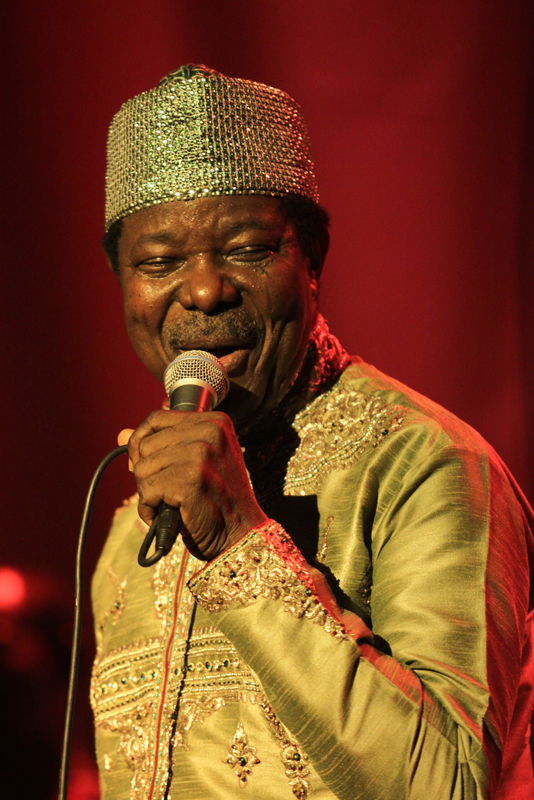 Not many know that the king of World Beats, King Sunny Ade and the enigmatic founder of INRI Evangelical Spiritual Church, Primate Elijah Ayodele are very close. In fact, they have been close from way back. Their relationship dates back to the year 2000 when they both actually began to grow their friendship. Back then, King Sunny Ade had adopted Primate Ayodele as his spiritual and prayer father. Interestingly, when Primate Ayodele got his first site at Oke-Afa at Primate Ayodele Crescent, he had invited King Sunny Ade to come to see the site and was probably hoping the king of World Beats would be generous enough to make some financial donations towards developing the new site. But things didn’t quite turn out that way for the Primate who must’ve been desperately looking forward to receiving some form of financial support from the Nigerian music superstar.

It was an excited Primate Ayodele that welcomed KSA to the new site. Soon, he gave King Sunny Ade sugar to pray on. Only a few seconds into the prayer, Sunny Ade’s countenance changed. He wore an extremely serious look on his face. King Sunny Ade, who was sporting a blue shirt on blue Jean, knelt down before the Primate and said, “this place will become too small for you.”

The Juju maestro described what he saw and said the church he was seeing spiritually “would be far ahead of this place.” KSA further advised the world-renowned prophet to hasten up and acquire more land within the vicinity to be able to contain the expansion and explosion of the congregation that he was already seeing. But, according to a source close to the Primate who has been with him from inception, “the Primate obviously didn’t take King Sunny Ade’s prophecy seriously, because understandably, there was a lot of work going on at the site at that time and lots of money was needed. Our father in the Lord was hoping that King Sunny Ade would give him some money to support the work of the Lord.

But surprisingly, instead of KSA giving him money, he gave the prophet of God a divine word that is much more valuable than money. He told him categorically that the church would experience such a massive explosion that the site will not be able to contain the church any longer. Now, about ten years after, Primate Ayodele began the first phase of expansion of the church. He rebuilt it, made it much bigger and finer and expanded it. Just when everyone was thinking that the additional space acquired was okay, by 2020, Ayodele acquired more land to accommodate a 30,000 capacity auditorium. It was simply unbelievable. Everyone was speechless at the wonder accomplished by God through our father in the Lord. And this is what brought back the memories of King Sunny Ade’s visit to the church 20 years and the word of prophecy he delivered,” concluded the close aide.

But what does this make of King Sunny Ade? Is he a prophet? The word out there is that he’s a strong member of the Cherubim and Seraphim fold. Everyone knows KSA is a music maestro but does this imply that God can use anybody to deliver his word? Now, with the fulfilment of this prophecy, come the 14th of February, 2022, Primate Ayodele has invited King Sunny Ade to reward him accordingly and pray for him as well as encourage him to move closer to God.

This special annual event will take place at Oke-Afa and kick-off by 9 am. At the event, Primate Ayodele will be giving out free GCE forms to about 1,000 youths, 2,000 widows will receive empowerment packages to support themselves with their children while journalists will receive vehicles. Many orphans too will be supported with money to pay their house rents. The highly respected man of God will also support the Nigeria Police, Federal Road Safety Corps, etc. Recall that Primate was named a United Nations Ambassador on account of his humongous philanthropic gestures and invaluable contributions to the upliftment of the less privileged in society.

READ ALSO: WHY I DECIDED TO RUN FOR OGUN GOVERNORSHIP – OTUNBA JIMI LAWAL

Why You Should Reduce Your Intake Of SUGAR