Home News How LAGOS Society Woman, Madam BISKET Survived COVID-19 – At Over 60 Without Going to the Hospital
News 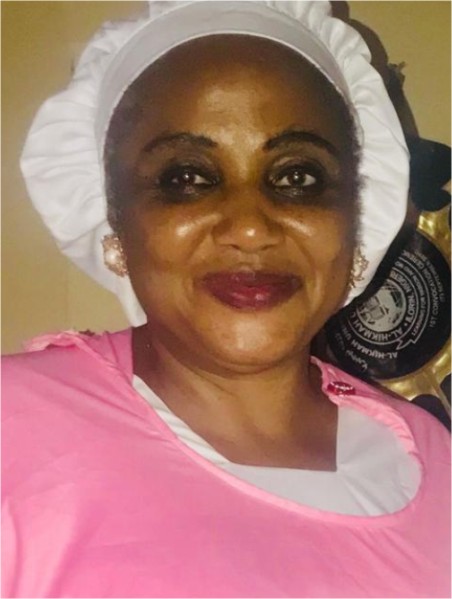 Everyone calls her Madam Bisket. Bisket is the name of her supermarket on Allen Avenue, Ikeja, Lagos. She is one of the oldest Landlords on this ever busy street. Many of those who started with her there have either folded up or have gone into oblivion. But Madam Bisket whose real name is Adebisi Dan Musa  has been waxing strong.

As you are reading this, Lagos Society woman, Madam Bisket is still in a happy mood. Reason? A lot has happened to her over the last few months and she has survived them all, coming out of it stronger in her faith in God.

The message she sent to all her friends and well wishers, a few days ago summed it all up. “25th is here, my birthday. Thank you Jehovah. Hmm! Oluwa ose. Hallelujah. Hallelujah. Hallelujah. By his grace I am alive. In January my Plaza burnt. I survived COVID in Nigeria, without hospital treatment, in my house at 60plus, with Jehovah. I survived Protest, no Bisket store got destroyed. Hallelujah! Anu ni mo rigba Hallelujah. Thanks to my children, both biological and adopted. I call them my heart beats. Iwalewa Ladies, I appreciate and love you always. To my family and friends, I remain grateful. I have no enemies by God’s grace. I stand on Psalm 91. Amen. Bisket Golden J.P”

It was to celebrate all these that she hosted a small get together on Sunday 29th November with her friends and family at her Lekki house last Sunday 29th November, 2020.  Over the years, she has become deeply religious, because of the many challenges she has been through over the last 2 decades. She is ageing gracefully. She is now Mother Celestial Prophetess, Adebisi Amoke Dan Musa.

In September, 2019, she hosted the Altar Laying ceremony of her Rabbi Cele Cathedral (formerly Rabbi Call  Church), inside her Bisket House, 70 Allen Avenue Ikeja. It is one of the parishes of Celestial Church of Christ.

What made her set up the church, City People Magazine asked her not too long ago. “I started Rabbi Call Evangelical Mission in 1994. I got my calling in 1987 in Thailand. I joined Evangelical Church of Yehweh in 1991, even though I was born an Anglican and I was raised up as an Anglican. I went to Celestial fold in the 70s. The 1st Celestial church I attended was in Ireland. They call it white sand. I was a member there. But I became a Muslim through my marriage. I didn’t stay long in Islam before God gave me my calling in Thailand. I heard a voice. He gave me a vision and I heard the voice distinctly that said I should return back to the Christian fold. I didn’t obey the voice until 1991 after the death of my son, Babatunde. After the incident I went back and I became a Xtian again under Evangelical Church of Yahweh. When I left Yahweh I set up my own Church, called Rabbi Call Evangelical Mission. We are mostly into Rehabilitation, we were well known for that at that time. Then, I used to rehabilitate Drug addicts. It was from the drug addict programme that the Children Programme came from, that I had problem with in 2001. And by God’s grace, I was later vindicated.”

“It was tough. I had the problem because they said I didn’t do normal papers on them.”

“They now referred me to Ikeja High Court, from where they released the children to me.”

“I did all their papers they now handed them over to me officially. Today, they are all grown up children. They are almost 30 years. Some of them now have children. You saw the little children running around. They are my grand children. Some of them are graduates. Some are doing their Youth Service. I have about 3 of them currently serving. One of them is preparing to go to the US or Canada for his Masters by Gods Grace.”

“He came out of Bells University. He did Engineering. He is an A Student. He is doing his Youth Service now. I thank God that today I have grand children out of them. They make me happy. They are all grown up. There is no underage among them again.”

When did she start Rabi Call Evangelical Mission?

“1994. Since that time I have been running my own church. But I have been teaching those close to me that I have Celestial Callings because anytime God talks to me what he reveals to me is Celestial Altar and I was always reluctant about white garment church. About 17 years ago, I tried to return back to Celestial Church, then my Uncle, the owner of Wakati Adura Parish, Laolu, asked me not to go back to Celestial, that so far as I have started my own calling, I should hold on to my calling.”

“I returned to Lagos 6 years ago, from Ilorin, where I lived with my ex-husband, to come and re-start my life, all over again. I was in Kwara State because of my marriage. I was shuttling between Kwara & Abuja. But when I got separated and I got my divorce I returned back to Lagos.”

“We got separated 6 years ago. I got my divorce last year, after 5 years in court. He was reluctant to come to Court. He told the Court we are going to settle. And I told the Court that I am leaving that I stayed 20 years in that marriage and for me to walk out of a 20 year marriage, I must have a solid reason behind it, that I don’t want to go back again. They delayed my request. The court said they don’t easily grant divorce, if the 2 parties don’t agree. They said they give them opportunity to reconcile. The judge was reluctant so the Court stayed for 4 to 5 years. I got my divorce, last year September. It’s a year now.”

“After I came back, I now focused on my personal life, my business life. I have stabilised so many things. The only thing I have not stabilised is the Church, because I felt 80% of the decision God is giving me is spiritual.”

“In my home, I have my Altar there. Privately. I have my Celestial Altar, always in my room. Even when I went to Kwara State, I went with my altar. Everybody close to me knows I move around with my Altar. I am always with my altar anywhere I go to. Last year, when I decided to go back fully into the Ministry, all the answers I got spiritually is celestial. But I was reluctant because my uncle, the owner of the Wakati Adura Ministry (Celestial) said I should not go back to Celestial. So, what should I do now? I met a Prophet, a man of God. God made us to meet each other and I told him this is my fear. This is what my Uncle  told me and I am really worried. He said we would both pray over it and God will guide us on what to do. Since that time he has been my Spiritual Mentor. He has been talking to me. He has been guiding me. He is the person who encouraged me to be strong, to go back into the fold. He is one of those in the top hierarchy of Celestial Church.”

“He is like the person who brought me back into the Celestial fold. I give him that Kudos. He tried, because he has been talking to me for over 1 year. I didn’t even respond to him. He will call me. I won’t pick his call. He will text me I would not reply his text. He too was telling me that all the messages he is getting is for me to come  back to the fold. I will tell him is it by force? Leave me alone. But he refused to leave me alone. He tried. About 6 months ago, I now told him, Ok I will pray over it. And I even knew before praying that God will be happy with the steps I am taking. Since I have been back to Celestial I have seen a lot of Grace & Favour before the Lord. I thank God for that. Celestial Church is not like any other Church where you can just open church and put up your signboard and start your own show. We have to respect them for that.”

“They are very very organized. He went to do all the paper work on my behalf. They now agreed to rededicate Rabbi Call Church as the Rabbi Call Cathedral, the CCC Parish in Ikeja here. All top hierarchy of Celestial Church came.”

“We also have work in progress on our Lekki Parish. It’s not just a Church it’s a Cathedral. The Lekki Parish is a Cathedral. We are going to have a Church, a hospital and school. It’s going to be a very big project. But by the Grace of God, before October, we would unfold part of it for people to see. And by December/January we should be able to open officially by Gods Grace.”

“When we started Rabbi Call Church it started like a joke. It was just 17 of us that started this place. Mayor was there.”

“Salawa Abeni, Dupe. We were 17. We started with a night vigil. Then on Sunday we did the 1st service. I now said what name are we calling this church? One of the women now said, “you are the owner of the Vision. Go and talk to God to give you a name. We can’t give you a name.” Whether you believe it or not, they gave me that name through a dream. Rabbi Call. I came back and told the others this is what I was given, Rabbi Call.”

“In my fold I had those who were even more knowledgeable in church organization than me in church work. God directed them to me. That was why from that year, within 2 years I opened 5 branches of this church. Iju, Ibadan, Ijebu-Ode, Allen and Ilorin. So Rabbi Call has produced 5 branches before, I went into that marriage that caused me a lot of setbacks, spiritually and in terms of growth.

How LAGOS Society Woman, Madam BISKET Survived COVID-19 – At Over 60 Without Going to the Hospital was last modified: November 30th, 2020 by Seye Kehinde