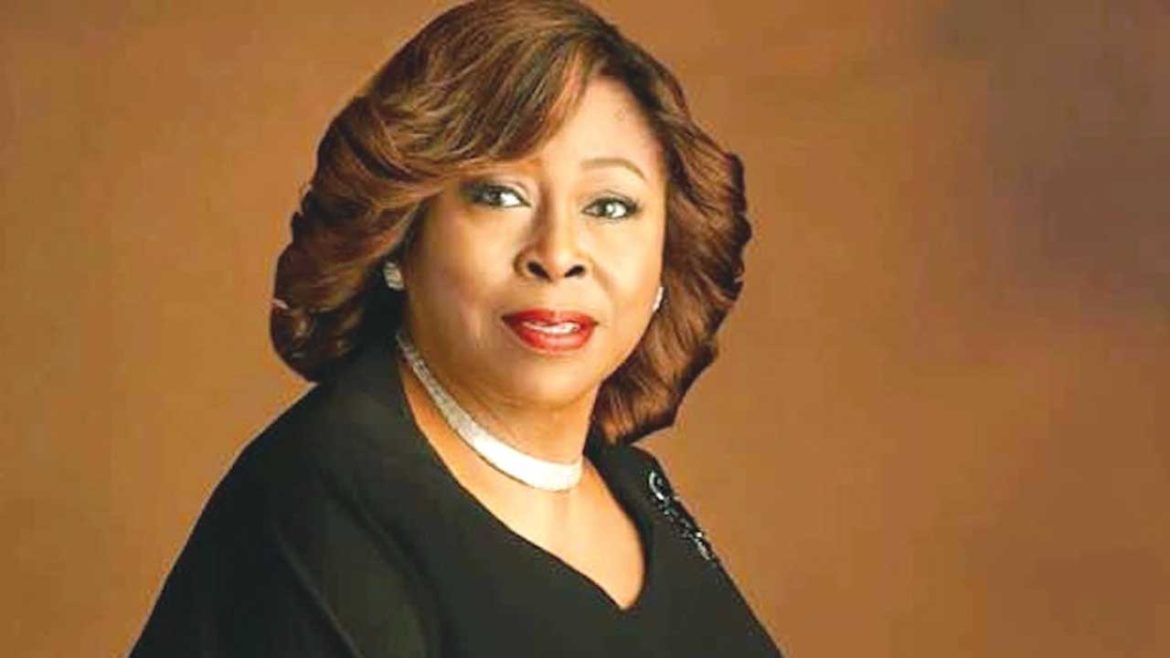 •Before She Died A Few Weeks Back
It was more of a celebration of Life on Tuesday, 2nd of July 2019 when the Lekki British School, Lagos founder, late Dr Biodun Laja was given a befitting burial in Lagos. The amazing educationist in her lifetime died on 26th May at age 69 just 8 months to her 70th birthday.

AT THE NIGHT OF TRIBUTES AND WAKE KEEP SERVICE

The eternal journey home of late Dr Biodun Laja started with a Service of songs/night of tributes on Sunday 30th June at Lekki British School hall inside the late founder’s school. It was attended by her children, families and members of her church, school officials and friends from all walks of life who inturn gave a good account of what and who Late Biodun Laja was to them in their glowing tribute.

The wake keep service was also at the same venue and it took place the next day, Monday 1st July. It was also filled to the brim. There were many performances by her students, church choir, all in her honour. The 2 day services was coordinated by Adonai Covenant Christian Church led by pastor Olusola Adegbonmire and other ministers of God.

The final passage of the late educationist took place at Redeemed Christian Church of God, Olive Tree Parish, Banana Island. The service was presided over by Pastor Okey Enelamah and 10 powerful men of God. It was a reflection moment for the congregation as the officiating ministers enjoined them to live a life of honour so as to leave a good legacy behind when they leave this earth. Some of the close family members came out to speak about Late Biodun Laja’s goodwill.

HER TWO CHILDREN WERE THE WORST HIT

The deceased was survived by her 2 sons, Francis Osa and Christian Irene Idehen and her grandchildren, Tobias, Jeroham,Joshua and Eli Idehen. They were the worst hit because they had looked forward giving their mum a grand 70th birthday party. They were both at the burial with their families and also spotted was their father, mr Francis Idehen.

They all wore same grey colour Swiss Atiku for the party.They are both successful doing very well in the United States.

The wife of the Nigeria’s president, Aisha Buhari also condoled with the Laja family. She wrote on behalf of all the entire women in the country to express her heartfelt sympathy over the demise of the foremost educationist.

Not many people know that the deceased has 2 celebrity sisters who are also prominent as she is except for the older people of their age. Yes, late Biodun Laja has sisters who also calls the shot in the society. Her elder sister is the former Customs topshot, Kofo Olugbesan while her younger sister is the Yeyeoge of Lagos and APC National women leader, South West, Chief Mrs. Kemi Nelson. They were both at all the 3 days services and gathered all their friends along to pay their last respect to their beloved sister.

In Late Biodun Laja’s lifetime, one man that is a recurring decimal in her life is pastor EA Adeboye. Her path with pastor Adeboye crossed many years ago and she has always lived her life by guiding principles from this anointed man of God.

It was Pastor Adeboye who speak into existence Lekki British School and was also the one who inaugurated it. Pastor adeboye was not at the burial but he wrote a glowing tribute about Late Biodun Laja whom he always referred to as his daughter.

He wrote “We count knowing her as a privilege. A goal getter who never gave up in the face of challenges.The news of her passage was a great shock to us. We will miss her no doubt”.

The old girls of St Louis grammar school Ibadan, SLIOGA 1991 set all gathered at the 3-day event to celebrate Late Biodun. They gave her their last respect as they circled round her casket at the church service to render their school anthem.

Late Biodun Laja was one of the foundation students of the school on Mokola Hills, also a founding member and most committed to the cause of the old girls association. In a tribute signed by their president and one of her close friend, Ambassador Folake Marcus Bello, she revealed that their last outing was at the general meeting hosted by late Biodun in January 2019 at the school.

Amongst the many important personalities who paid their last respect to Late Biodun Laja were RCCG, City of David pastor, Idowu and Siju Iluyomade. The deceased was one of the people God has blessed city of David with.

Pastor ID wrote” your death so shocking and final. You personally saw to the clothing of city of David main choir for many years,you took the same choir to missionary trips to South Africa,your consistent support to handmaidens and Arise Conferences.

Your school adopted RCCG city of David as their church and always worshipped in their school uniforms every Sunday. You will surely be missed by young and old in the church. The pastorate of City of David will surely miss you.

She is also one of the close family friend of the deceased, no wonder the news of her death was shocking to her.She was one of the dignatries who commiserate with the Laja family and sent in her tribute.

The executive governor of Lagos State, Babajide Sanwoolu was one of the dignatries who paid homage to the families of Late Biodun Laja. He described that the deceased’s contribution and impact on the overall development of the educational sector is felt far beyond the length and breadth of our shores. He says “her loss is unquantifiable and we are indeed poorer without her”.

WHY I AM ATTRACTED TO LATE BIODUN LAJA- SEN ITA GIWA

Senator Florence Ita Giwa was one of the older friends of Late Biodun Laja. She was at the 3 days event to honour her younger friend. She spoke glowingly of her. She wrote, I have always been attracted to driven,ambitious and hardworking people hence my long and rewarding relationship with my dear friend,Biodun Laja. I still have tremendous respect for her sense of purpose which saw her become the proprietor of a school at age 27.Biodun my friend,my sister, God bless your soul””.

She disclosed that the deceased had already chosen a dress code for her birthday, saying she does not want anyone to put on Buba and wrapper, she had already penciled down the event venue to use, she had made plans on the event vendors to contract and mapped out plans on how the day will turned out. Her younger sister, Kemi Nelson also revealed in her tribute how they were all planning and looking forward to celebrate her big when she turns 70.

HER CLIQUE OF OLDER FRIENDS WERE THERE

At the burial were many celebrity women who are older friends of the deceased. The deceased is a woman of many parts which cuts across society, education and the corporate sector at large. No wonder many society women light up the burial to also pay their last respect to whom they love so much.

This set of older friends had their table tagged “OLDER FRIENDS” where they sat at the reception. They are also friends of the deceased elder sister, Kofo Olugbesan. Sighted were Senator Florence Ita Giwa, Hajia Abba Folawiyo who led others.

HER CLOSEST FRIEND, BARR. SHADE BALOGUN STOOD BY THE FAMILY

If you are conversant with societal happenings and you are also an Owambe person then you would have noticed the presence of this 2 women at A-list parties. In Dr Biodun Laja’s life time, she had one friend in Lagos society woman, Barrister Shade Balogun.

They are like Siamese twins, they go everywhere together. They are known within the social circuit as sisters. Their friendship transcends to a family affair and when you sight them, they wear same attire, jewelries to parties. Since she passed on, Barr Shade has stood solidly behind the Laja families and was part of the committee who planned everything. She was the brain behind the Aso Oke that was worn at the burial by the deceased children. She has given the society scene a wild berth for now.

AND OTHER VIPS TOO

HARBOUR POINT WAS THE RECEPTION

The reception party for the burial was at Harbour Point event centre where guests were treated to a lovely afternoon of sumptuous delicacies.Shuga Band serenaded guests and the vendors who catered for the event were numbered up to 10. KSquare security was incharge while Funke Bucknor of Zapphaire event coordinated the event.