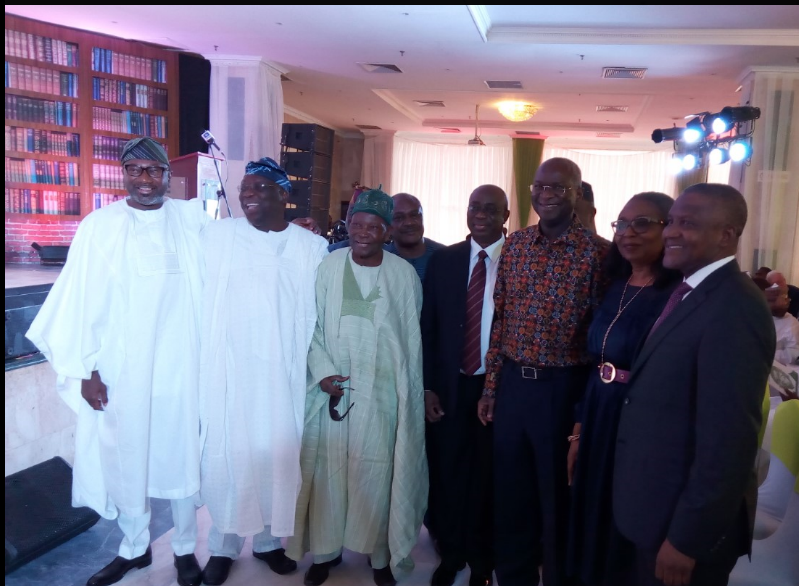 A seemingly silent auditorium was greeted by the joyous echoes of celebration as families, friends, acquaintances and well-wishers chanted the popular happy birthday song to the honorable minister of power, works and housing, Mr Babatunde Raji Fashola, BRF, as he marked his 55th birthday in a rather unusual manner in Lagos.

On Thursday, 28th June, 2018, the city hall in Onikan, Lagos was filled to capacity as majorly young people with a collection of the elderly gathered to celebrate the former governor of Lagos, this time around not with sonorous music and dances but a gathering intellects purposively designed to discuss ideas and map out a brighter and rewarding future for the average Nigerian youth who looked to be hopeless and depressed about the current situation of the country.

Present at the event were the high and mighty in the Nigerian business sector, which included Africa’s richest man and multi billionaire businessman, Aliko Dangote, oil and gas business mogul and CEO of Forte oil, Femi Otedola, the Chairperson, First Bank of Nigeria plc, Mrs Ibukun Awosika amongst several others.

Also present were professionals from the entertainment industry such as popular movie producer, director and CEO, Mainframe film and TV productions, Mr. Tunde Kelani, award winning movie actor, director and producer, Kunle Afolayan, popular standup comedian, Bright Okpocha, IT guru and vice president of global operations at Andela, an IT firm that has empowered over 500 Nigerian youths in just about four years of operation.

Bisola Aiyeola who came into limelight after participating in the 2017 of the popular Nigerian reality TV show, big brother naija brought her oratory skills into display as she played the anchor role to the listening pleasure of all those in attendance. There was never a dull moment as she thrilled everyone with her display of professionalism.

Tagged BRF GABFEST 2018, the inaugural birthday summit for the honorable minister was themed “the youth in Nigeria: mapping the future”. Mrs. Awosika who is well read, vast in almost all spheres and conversant with statistics and current trends in the nation delved into what Nigeria must do as a nation to be rightly positioned for harnessing the potentials at the country’s disposal.

Her emphases were on building structures and values that will make everyone become proud of the brand ‘Nigeria’ and she says this starts with putting education first. She noted that it is not just churning out university graduates year in and out who are unemployable because of the faulty institutions but seasoned youths who can provide solutions to the prevalent challenges of its society.

She pointed out certain things that must be done in other to make the future work for all of us. She said “we need to create the right environment and it starts from our educational system, we need to harmonize our educational system with what the real sector requires. We need to look at the trends of now and the trends of the future and see what knowledge would be relevant in the market place of today, what knowledge are the employers of labour searching for? And then we must ask ourselves if the quality of education we have right now meets those needs.

Speaking on the celebrant, Mrs Awosika gladly opined that the initiative to have a birthday celebrated with such an eye opening discussion simply showed the mindset of Mr. Fashola as a leader and a nation builder. “His interest is not in having a party but investing in the minds of the young people and in getting us having a discuss about how we can do it better because he serves the interest of all of us to make our nation work better.”

Screen diva Maupe Ogun-Yusuf is a popular figure in homes because she is a co-host on Channels TV’s hottest current affairs programme, sunrise daily. She was joined by four other young voices from various sectors to discuss “getting the youths involved.

Other members of the panel discussion were Ms. Ayisha Osori, a lawyer, writer, and columnist in the Thisday newspaper and currently Leadership newspaper, Kayode Adegbite, an entrepreneur and young politician running vying for a seat in the Ogun state house of assembly, Asuquo Ekpenyong, the commissioner for finance, Cross river state and a representative of the Anambra state finance commissioner, Mr Obiora Obakumo.

The panel concluded that youth participation in politics is key to arriving at the desired result of achieving a result driven Nigerian state. There cannot be involvement by proxy, except youths are actively involved and represented in the process of governance, Nigeria will continue to fall shorts of ideas that will suit the 21st century governance system.

He is popular for his rib cracking jokes and standup comedy but at GABFEST 2018, international comedy act, Bright Okpocha popularly known as Basket Mouth opened up on how his excellency, Mr. Babatunde Fashola touched his life and that of several entertainers while he was the governor of Lagos state.

Basket mouth said one of his motivations for participating in the event was the role Mr Fashola and his wife Mrs. Abimbola Fashola played in the lives of the children whose parents died in the 2012 Dana plane crash in Lagos. He said the then Lagos governor has since then taken full responsibilities for the children without even making a public announcement unlike the conventional Nigerian politicians.

Speaking about the celebrant, Basket mouth says “there’s so much to say about him but the most important one is the fact that he has an interest in the young ones and that has been giving us confidence. If you look at what he has done and the people he has supported, you will realize that 90% of those people are youths and that’s what I commend him for and I want to wish him a happy birthday.”

This Is A Surprise Birthday Summit – Fashola

55 years is indeed a milestone and his excellency didn’t fail to admit that and so he was full of smiles and accolades for his wife, immediate family and team for pulling up such a huge crowd and putting resources together in such a way that he so much appreciates and prefers to just partying and dancing.

While speaking to journalists, the honorable minister of power, works and housing says he was not aware that the event was going to hold until few hours to the day.

“I didn’t fix today, it was my young assistants and associates who have today. I was hearing what GABFEST is this morning; they didn’t tell me about it, they planned it with my wife, she just said I should come home last night and that we have to cook jollof rice and then this morning they gave me the programme that we are going to GABFEST.

“But I’m thankful that they did so, it’s important, the subject of the next generation, how we plan the future for them, so we hope that we look at some of the resolutions that we made here and do something about them and move forward from there.