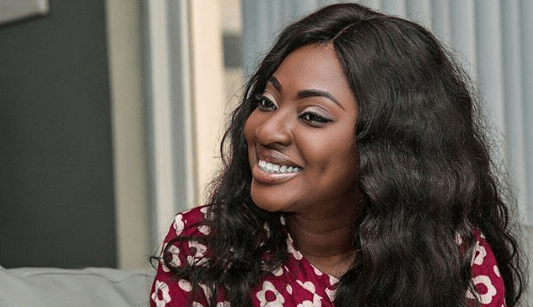 Few days ago, Yvonne Jegede, the talented Nigerian actress spoke to Pulse, a popular Online TV about her failed marriage. In the last couple of months, the actress has been in the limelight, and rumour about her marriage has been spread across social media and print media. But few days ago, she granted an interview to Pulse TV, where she revealed the cause of her failed marriage with her husband Olakunle Fawole, popularly called Abounce.

According to her “We started having issues before the birth of his son; 3 months after the pregnancy when the issue came and things got worse. And when the issue came, there was never a happy moment. It just kept going up.  Below are excepts of the interview.

How has it been being married to your colleague?

Initially, I didn’t want to be with actor but when you have a friend that has been there and constantly tells you this and that, so I gave it a try. Marrying an actor was good, good in the sense that you both understood the job and there are so many things you don’t have to explain to him. But if mine doesn’t work, that doesn’t mean other people won’t. Because when I got married, I did a Court marriage and on my way to court, a director called me and said you have to be on set today and I said it’s not going to possible that I was on my way to court. So when I insisted, I said call my husband, tell him, ask him. And he said I would come to your house the next day which happened to be Thursday to beg my husband, and I said if he agrees fine. And when he came and told my husband, he just agreed to his plea. But, if it were to be a Banker or Doctor, the person would react.

So, would you say there were mistakes you made and lessons learnt?

Of course, you make mistakes. I’m not perfect. I make uncountable mistakes that could be corrected or overlooked but here we are today. I have learnt my mistakes. I have learnt from experience. Such mistake will not happen again.

Was it worth it for you to go back into it?

Have you seen my boy? He’s a blessing. So yes, it was worth it. It was nice. The journey was sweet. I wouldn’t say it was bad the whole time I had with him.

Would you want to try again?

I will just want to focus on my child. I don’t have that energy now. Only if…. (looking into the Sky).

You have changed your I handle. Why did you do that and what is the state of things with your husband?

I believe it’s mutual agreement. It not working out.

I have my own complaints and he has his. I don’t see the marriage or relationship going beyond where we got to and we had to call it quits.

Did you take those decisions after the birth of your son?

We started having the issue before the birth of my baby. I was 2-3 months pregnant when it all started.

Was he with you during the delivery and after the birth?

No, he wasn’t. As a matter of fact, there was no sign of that, and that got me thinking. He wasn’t there physically, emotionally. At that stage, I was very vulnerable. I wanted care, affection. I didn’t get any of that. It was like I got myself pregnant. Things couldn’t just get better.

Is there a third party?

No. There was no third party but he was listening to people, or let me say a friend; somebody who is always talking to him on what to do, like a friend of his, who was my friend  before. I was in the country, we hanged out. We were getting along as friends and that was it.

And it wasn’t anywhere near an affair?

No. There was no affair. We were just friends.

The friend had a strong hold on him.

And there was no reason that your friend had a stronghold on your husband?

She’s cool with me, I was cool with her; we were buddies, more like family friends. I introduced them and from their there, they started hanging out.

How has it been coping by yourself after this drama?

I’m still by myself. I’m a strong person before anybody says it to me. I know what I go through. I know how I handle myself and my baby. I will say there is never a down moment. There was never a time I sat down and cry and felt the world is against me. Have never regretted anything in my life. I have been by myself since April because I got pregnant in January. I noticed I lost my period in January.  Since then, it’s not felt like marriage. I have been by myself through the whole process and when I saw the publication that he wasn’t sure of the paternity of the child. When I got married, it wasn’t like I got pregnant immediately and I said wow! No!. We went to look for child. We sought medical help. He came up that he had this friend who was a doctor we can go to, that helps people and he can help us, and I said let’s go. So, we went there October, November  and December.

We went 3 times. And January, I didn’t see my monthly circle. And I was in Dubai, So I called him that I wasn’t see sought my monthly circle, that when I come back we would do a test before we go to the doctor to say thank you sir. I did that. And things just drastically for no reason changed, slowly.

What prompted me to move out is that, I was in the house with him for about 3 weeks, we weren’t talking, we weren’t speaking to each other. I’m the type who can’t keep malice. I can’t be in a house with you and it’s just 2 of us and I won’t say hi to you. I’m not wired like that.

I was not in the situation where I could easily control myself but I found myself getting upset with some certain things and my husband was even more angrier. He was not helping things. He started irritating me when my little friend came to visit for 2 weeks. He would just say, babe, I just bought stuff, do you want to make soup for me, I’m going to the gym?  And she said to me, why is he talking to me and not you? But I would ask her to make the soup for him and I would put my eyes on the TV. Initially, I thought I could handle it but I couldn’t. So, I just packed my stuff. I said, I’m pregnant, I need someone to take care of me and I left to my parents house. And that’s how we found ourselves here.

Was there any extra marital affair maybe from your side?

Till today, no communication from him, we don’t speak.

Why didn’t you call him or ask him any question when you saw the publication saying the babe wasn’t his?

No. He has come twice to see his son, after we got back to the country. He has pictures of his son on his phone but why he didn’t post them is what I don’t know! Maybe it’s personal reason, I don’t know.

Do you think it was all mistake?

No. I don’t think it’s a mistake especially with the decision like this. He was a very good friend of mine before we got married. We were so much good friends. We had so much laughter  and those are some of the things I saw, that I want to enjoy in my marriage. Maybe love wasn’t enough for marriage.

Why The ‘O to ge’ Movement Failed In LAGOS