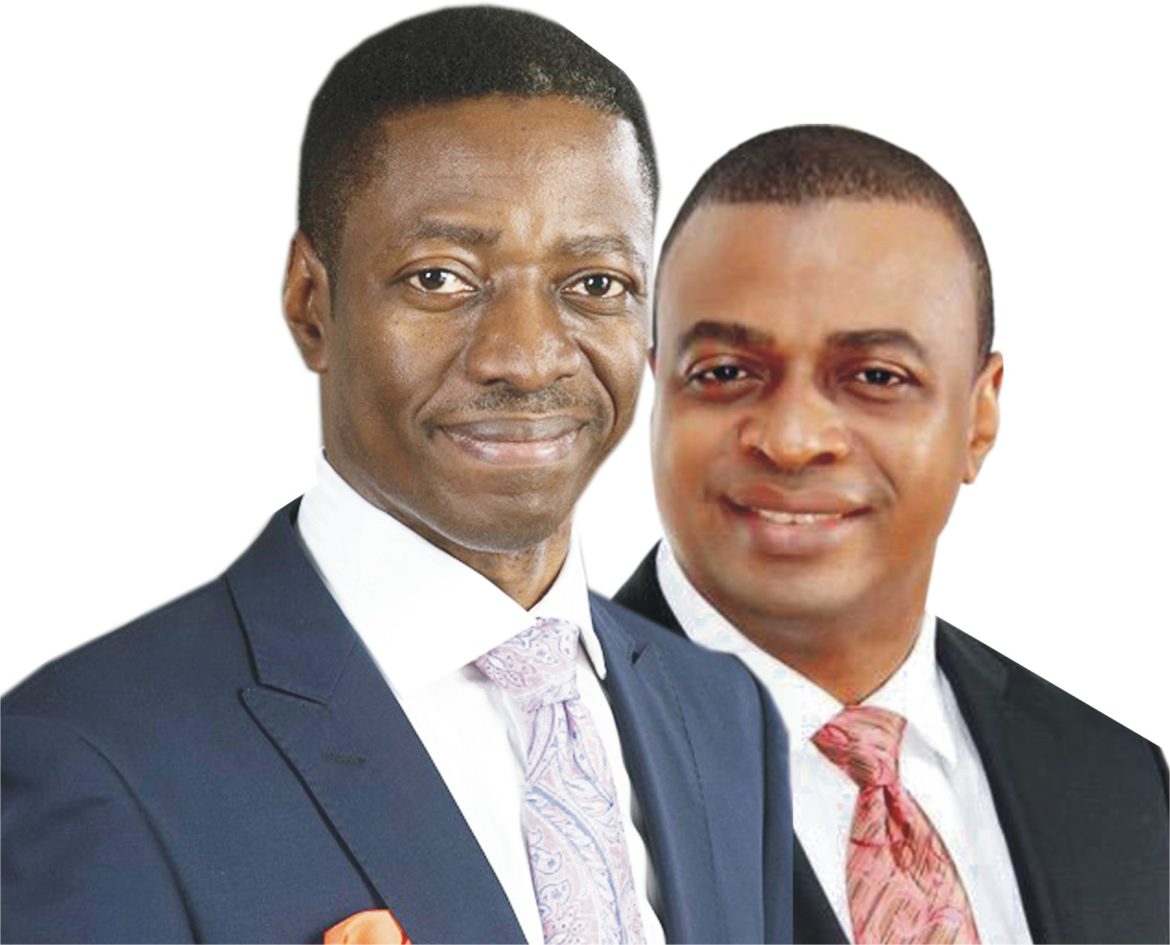 This is the story of 2 handsome brothers who are prominent Pastors. It is the story of Pastor Victor Adeyemi & Pastor Sam Adeyemi. Many people don’t know they are brothers. They are. Pastor Sam Adeyemi is the Snr. Pastor of Day Star Christian Centre. He has a younger brother, Pastor Victor Adeyemi who is also a Pastor of Global Harvest Churches. The siblings, who spent their first 8 years of their life in Mokuwa in Niger State were deeply influenced by their religious background to work in God’s vineyard, shepherding and winning souls for Christ. Pastor Victor, who advocated ideological based political party and selfless, patriotic political leaders to take people to the promised land where tenets of democracy are upheld and people’s fundamental rights are respected, reflected on the sibling love that binds him and his elder brother. Pastor Victor Adeyemi, spoke to City People last week.

Read more about these 2 handsome clergy brothers, below.

Please share with us your relationship with your brother, Pastor Sam Adeyemi?

It has been very fulfilling, exciting and enriching. Pastor Sam Adeyemi is my elder brother and interestingly, there is just a year and ten months between us. When children are born so close to one another, they are usually very close. Of course, as children, you will have your sibling rivalry, wrestling with one another, but we stopped doing that as teenagers and he noticed that I was as strong as he was.

Fortunately, we came into our spiritual persuasion and calling at the same time. So, just like we grew up together physically, we grew up spiritually and we worked under the same pastor also and we left that ministry the same time and we didn’t plan it as siblings. He was the first person to speak on a journey that he was planning to talk to our pastor, “God is speaking to me about starting a ministry which is Day Star today and I was like really, I was planning on doing the same”.

It was a discovery we both made and that was how we started our ministry. We continue to remain very close and the Bible says that a friend loves at all times and a brother is born for the day of adversity. We’ve loved each other from childhood and will continue to do so. In the good times and the bad times, we are solidly there for each other. We like a verse in Proverbs that says: “there is a friend who sticks closer than a brother”, we feel very close and we feel like we are not just brothers but very close friends.

Let’s talk about the role of your wife in your ministry?

My wife has been my rock. She has been by my side very solidly from day one. We met when we were both under my pastor. Till we got married, she was his personal assistant. We became connected by our shared values and passion for spiritual things. We sensed a lot of mutuality between us and that grew into a strong conviction that we are really meant for each other in God’s plan and we are so grateful. We got married on the 7th of Nov, 1992, and we are 27 years married now. We got married on my 24th anniversary and she was 22. We thank God our marriage has grown over the years. She has been right there by my side. She has been the Vice President of our ministry from the very beginning. She has served as administrator, and she has served in various capacities over the years.

Today, she is even the pastor of our main church in Lagos, because I oversee all the branches and I travel a lot and she is doing a better job of it than I was doing. So, she has been very active from the very first day of the ministry and she remains very active till today. She is a solid partner and a solid rock behind me.

Can you tell us a little bit about your growing up years?

Life started for me over 51 and half years ago in the Mokuwa, Niger State. Actually born in the then Nepa hospital in Kanji that is New Bissau. Our dad worked with the Ahmadu Bello University research station in Mokuwa, Niger State. He was the head of the building and maintenance unit of the research section and we lived in the staff quarters at that time. The staff quarters were located in a village so my first 8 years in life was in a rural setting. That is why I don’t like this Lagos as much has like my village and I like the rural setting. I hailed from Odoere in Kogi State then Kwara State and now the Kogi State. So, we are part of what you call the Okun people of Kogi State and we speak the Yagba dialect, a dialect of the Yoruba language.

Our historical ancestry is from Oyo Ile in Oyo State. So, life started out in Mokuwa, Niger State, and I was 8 when our family moved to Ilorin, Kwara State and our dad resigned his appointment and went into business and one of the major motivation for moving to Ilorin was because he didn’t want his sons to grow up in that rural area. So, he moved us to Ilorin where we furthered our education through primary to secondary school. I went to Kwara State Polytechnic and from there I went into the ministry with Rema Chapel. I had a humble family background and a religious family and that exposed us to what we are doing today.

What is your message to the listeners at home?

I just want to say keep hope alive. Difficult times don’t last forever. When I finished secondary school as a teenage boy, I failed exams. I couldn’t make enough credits to further my education and poverty set in and my family could not even send me back to school. It was through the contribution of Christian brothers and sisters in the small fellowship that I was able to do GCE to now be able to put my results together and able to further my education. It was a very gloomy period for me as I was very depressed and even suicidal at that time, but thankfully I didn’t have the courage to take my life at that time.

I remember reading a book from an uncle of mine who had led me to Christ and brought me into the faith that I have right today and that book was written by Robert Shula and it’s entitled: Tough Times Don’t Last But Tough People Do. I picked the book and began to read it and hope began to revive inside of me. One reality is these tough times never last. This is not the first pandemic that would hit the world and my brother discovered one that happened about a hundred years ago even it affected Nigeria and today we still have our planet.

There are various challenges that have come against our world, but we always overcome, so it is the same thing for us as individuals. Victory is a great possibility for everyone and we should just seek to connect with God. Don’t go through life alone without that help that comes from heaven. When the heaven is backing you up, you will survive your trying times and you will come out victorious.

How do you see the political situation in the country?

The political situation in the country is not one that excites me personally whatsoever. While on the other hand, I’m grateful for the gradual political evolution of Nigeria, at least, we are no longer under military rule. However, I’m not happy as we do not have any strong political party that is based on any sound ideology. The freedom that our politicians move from APC to PDP back to APC is really very sad. We want to see sound ideologies, courageous leadership that will not only fight corruption, but a level of social reorientation that should take place in the entire nation and I believe that the government is going to come up with a strategy.

Apart from the fact that there are more than enough media fora and platforms to speak with in the nation, we can also infiltrate the education curricular of our school from element to tertiary institutions to reeducate the average Nigerian. My prayer is that God will give us visionary and courageous political leaders who will reorientate the entire nation in addition to the establishment of the rule of law for national transformation.

READ ALSO: 3 FACTORS HAVE MADE ME RELEVANT IN THE MOVIE INDUSTRY – STAR ACTOR, MICHEAL EZURUONYE OPENS UP

3 Factors Have Made Me Relevant In The Movie Industry – Star Actor, MICHEAL EZURUONYE Opens Up