Home News How My Husband & I Have Made Our Marriage Work – CLAM Pastor, WOLE OLADIYUN & Wife, BUKOLA
News

How My Husband & I Have Made Our Marriage Work – CLAM Pastor, WOLE OLADIYUN & Wife, BUKOLA 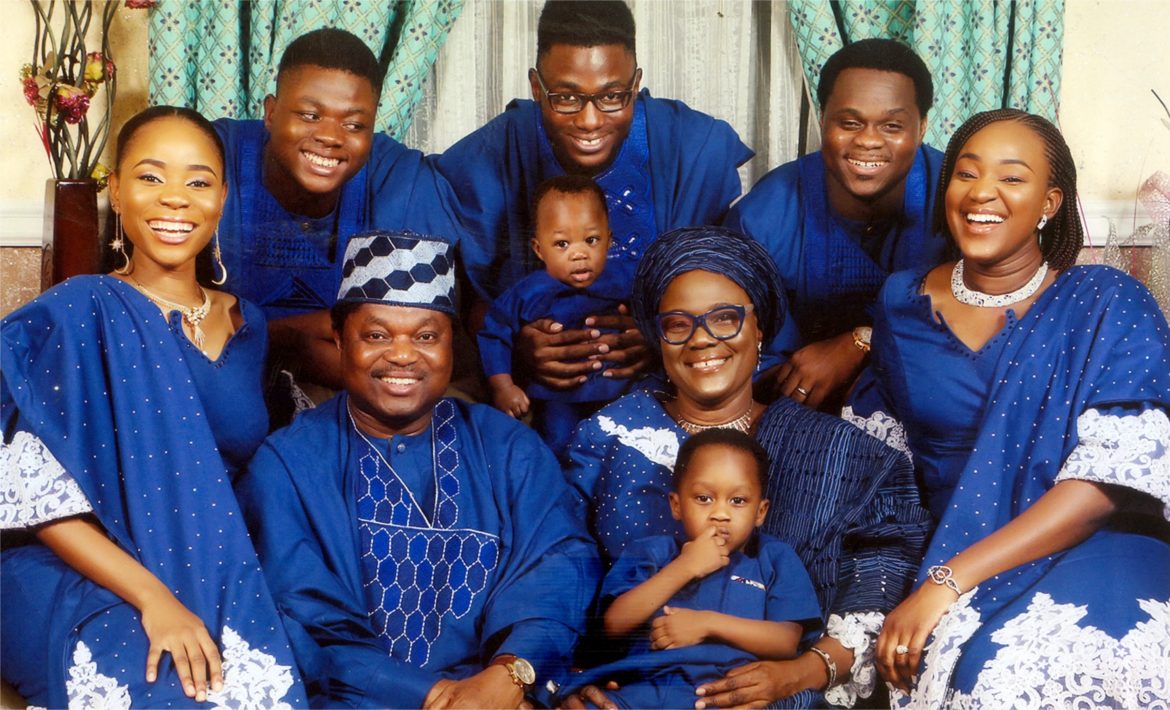 CLAM Pastor, Wole Oladiyun  & his lovely wife,  Pastor Bukola are a happy couple. You need to see the 2 of them together. They are always into each other, laughing and giggling. Those who know Pastor Wole Oladiyun will readily tell you he is a tough man and highly principled. He does not take nonsense from anybody. He can be uncompromising on matters of principles. He is meticulous, prim and proper and he always wants things done properly. So everybody believes that it is only a patient and painstaking woman like Pastor Bukola that can manage a unique man like him who is also a Pastor  & man of God. Recently, both of them spoke to City People about what has made their marriage work out. Below are excerpts of the interview with Pastor & Pastor (Mrs) Wole Oladiyun inside the newly opened CLAM Towers at their Omole Church headquarters in Lagos.

Congratulations on the new CLAM office complex. How do you feel?

I feel happy. We thank God. And the glory goes to God because its his doing. We are just in awe of what he is doing here and we bless his name. All thanks to HIM.

We thank God it’s been exponentially great. We thank God all the way. God has been faithful. He is the one doing it. We can not share the glory with him. We want to thank God for the servant of God, Wole Oladiyun. He has drafted him right from the beginning to be able to do the assignment.

So, its Grace multiplied and we thank God for Hardwork plus Gods blessings, and for not giving up, as he keeps pressing on regardless of all the obstacles on the way. Altogether, its Gods faithfulness his blessings and his efforts.

How do you juggle all your roles as a Pastor’s wife, mother, grandmother, school administrator,  Head of a Ministry, and now a farm owner?

Hmmm! That is a big one. It’s been easy in Jesus’ name. I don’t want to confess otherwise. The Lord has been helping me. I don’t know how He has been doing that. From time to time, I try to have some little, little breaks here and there. It’s a tough one.

I think my life has been from one season to the other. When I was much younger, I used to leave home as early as 6 am. Before the Ministry started I was working in the bank. Then I was still at the early years in parenting. After some time, God gave me a Vision for Ji Niss Nursery & Primary School and so my children attended all the phases of the school. So, I didn’t have to do school runs. The school was just close by. Right now, I am a bit relieved because the baby of the family is already in the University. I don’t even know how God has helped me to do it.

(Her husband Comes in here)

Pastor Wole: Its true she juggles so many roles. She is a mother, a wife, a farmer, an educationist… I want to appreciate Pastor Bukola Oladiyun because there was a time I took a biro and wrote all her roles down. No 1 for a woman to manage a hyper choleric like me, that woman must be endowed with a Special Grace from heaven because of the depth of my capacity. She is a very dutiful wife. She is not given to much talk but she does what she is supposed to do. As a wife she has done well. And as a mother she has done well too. She absolutely relies on the Bible for everything she does.

She has been able to manage our children and our grandchildren. We have 2 grandsons by the special Grace of God. Our children are very grateful to her. She combines the role of a wife, with the role of being a Pastor’s wife in charge of family life in CLAM, with the farms she owns. She has SHALOM Farms at Kobape area in Ogun State. She produces Shalom Garri. She deals with Organic stuff. She does not use fertilisers.  She does not use Herbicides in her farm. She believes in Healthy Living. She believes in Wellness. She runs a Wellness Centre in the hospital here where you exercise your body every day. So, she is a farmer also. I want to say she is a family person also. To her larger family. She is very responsible and responsive to them. She is a Counsellor also. She is a very deep counsellor. My wife is so articulate, she minds details. She does not want any case to be done in a very shabby way. If you want to deal with her, you must get organized and you must know what you want to say. She is a very good time manager. She does not like extemporaneous things. I just forced her into doing this interview now. She likes to prepare herself.

(For Mrs Oladiyun) Tell us about your new farm?

I have a farm and I have farm hands who help out there. I have a farm Supervisor, I go to visit the farm from time to time particularly when they want to do production when they want to produce Garri. I ensure that it is done under the highest form of Hygiene. I am particular about eating healthy and not just taking in thrash. We eat from there as well. So I won’t give bad food to the public.

(Wife) What made you go into farming?

I remember many years back, the Lord spoke to our father in the Lord that God has returned the wealth of Nigeria to Agric & Minning. Not just Nigeria. He mentioned some other nations of the world. In less than 2 weeks after the Lord spoke to him about those nations, what the Lord spoke to him about happened. I now said to myself, I shouldn’t allow familiarity to enter the matter. If I am close to the prophet and he has spoken and the things he said are happening, what am I doing”. I said to myself, I better key into this. By the grace of God, I got about 20 acres of farmland around Kobape. We have been farming since then. But I do not allow any form of Habicide, pesticide. Its all organic.

Your marriage is how many years old now?

How has it been? What has been the secret of the  success?

Its been God, Patience, Prayers and seeking to know more about how to make ones homework. Of course in those days there were no courses on Family Life in Universities and the bulk of what we grew up with are things we saw our parents do, the way they ran their family and a bit of marriage counselling not as much as we have now. It’s so detailed now, we have so many books. We have so many marriage counselors all over the word in the UK and US. I read a lot of books and we pray more.

How did you meet Daddy? Tell us your love story. How did Daddy propose to you?

It took a while. Let me tell you the story. When I was in secondary school, I got to a point, that I will call the age of accountability, when you can differentiate between Good & Evil. When I got to my mid-teens, I discovered that I was feeling somehow, and saw how my friends and classmates were doing things. I said no, I won’t join them. I told God, I won’t do my things anyhow. In terms of the Boy-Girl relationship, I would take my time. I said to God-God I love you and I would want to marry.

But, I would not want to marry somebody who will take me away from you. So, upfront, I had that philosophy at the back of my mind, so I started praying.

Then, in secondary school, I will fast Monday, Wednesday and Friday. That was how it was with me all through my secondary school days. I attended Prospect High School, Abanla, Ibadan. I was very studious. All through my life in secondary school, I was a Class Prefect and in my Form 5, I was the Head Girl. In those days, I will always Pray and Fast. I will keep telling God what I want and for him to show me the person he has for me. On one of those days, I went into a trance and I saw him. I had not actually met him in physical form. It was much later that I now remembered that this was actually the way I saw him in my trance.

It was a flash. And I asked myself: what happened just now.

My dad, my family use to live in Ibadan. That was when my dad was lecturing at the School of Hygiene. But later on during the creation of states we moved back to Ondo State. We are from Ondo State. At a point, I had that feeling I said to myself, now I am ready. I had just finished my A’Levels at the Federal School of Arts and Science.

I told God, now I am ready for a relationship. I began to pray. One of those times I was just sitting in my father’s garage. My father had a house on Boluji Avenue at Boluji Grammar School, Ile Oluji. I was there and I was trying to make a broom.

The street is lined with Palm Trees on both sides of the road. The Palm tapper came and cut off some of the Palm fronts and I collected it and I sat in front of our house and was making brooms.

Suddenly, somebody walked into my father’s compound and said he was asking for my brother. I said he was not around. My brother attended Bolugi Grammar School. I schooled in Ibadan. So I don’t know anybody. I was on holiday. I told him my brother wasn’t around but however I will deliver his message. And he went away. Suddenly, some days later, a girl just walked into my father’s compound and brought cards. She brought the card and there was no name on it. Only Annonymous. She came the 2nd time. She came the 3rd time. I now told the girl if you come here again and you don’t tell me any name I would send you away with your card. At some point, he now showed up that he was the Annonymous. I now said I thought you said you came to look for my brother. We both burst out laughing.

However, when my brother came around, he was at the University of Ibadan then. When he came I now asked him. Do you know this guy? I said, who is he exactly? Tell me who he is. He now said, oh he is good man, that he knows him.

How My Husband & I Have Made Our Marriage Work – CLAM Pastor, WOLE OLADIYUN & Wife, BUKOLA was last modified: December 16th, 2019 by City People